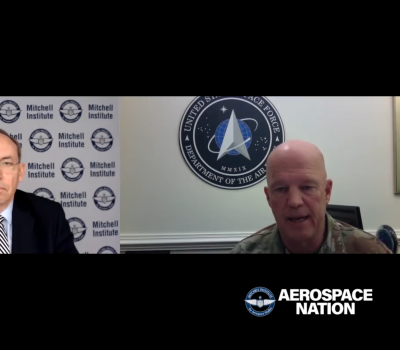 By Rachel S. Cohen
The Space Force is working on its capstone space doctrine publication as well as a new deterrence strategy to shape its way forward, Chief of Space Operations Gen. Jay Raymond said in an April 7 discussion with AFA’s Mitchell Institute for Aerospace Studies. New doctrine will reflect that space is increasingly crowded and possibly dangerous, with more entities developing ways to damage and confuse U.S. satellites and ground stations. The forthcoming deterrence strategy will also lay out a plan for declassifying operations to the point that the Space Force can credibly warn off potential attackers. 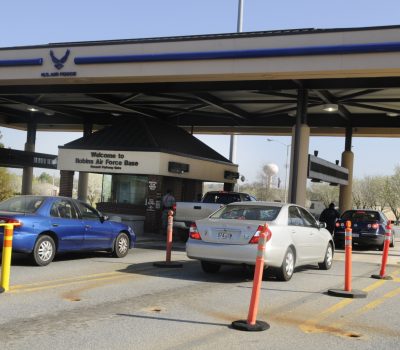 By Brian W. Everstine
The Air Force has announced the first death of a service-affiliated person because of COVID-19, the disease caused by the new coronavirus. A contractor affiliated with Robins Air Force Base, Ga., died April 3 from suspected medical complications related to COVID-19, the base announced April 6. The individual was under prior treatment for medical and respiratory complications when diagnosed as COVID-19 positive. 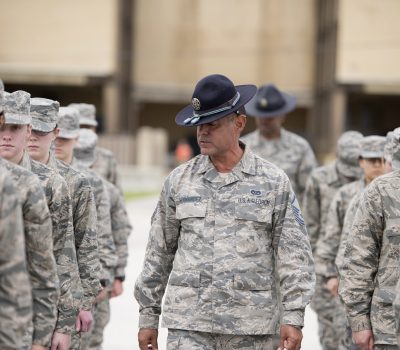 By Brian W. Everstine
New trainees will graduate Basic Military Training in seven weeks instead of eight and a half, as the Air Force looks to mitigate the coronavirus outbreak. The temporary move is intended to “enhance social-distancing requirements” at Joint Base San Antonio-Lackland, Texas, according to an Air Education and Training Command release. The move comes as the Air Force also looks to send 60 BMT trainees to Keesler Air Force Base, Miss., as part of a beta test meant to reduce the overall BMT class size and to see how another base can handle Basic Military Training. 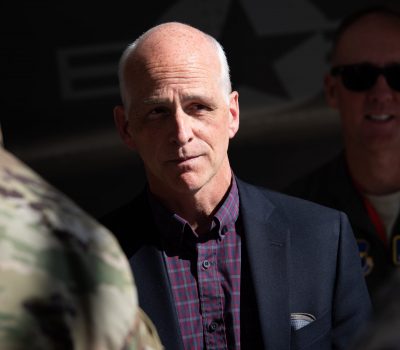 By Rachel S. Cohen
House Armed Services Committee Chairman Rep. Adam Smith (D-Wash.) told reporters April 7 the coronavirus pandemic will put more pressure on the armed forces to make smart investments and cut down on wasteful spending as the U.S. faces flattening budgets and tough economic times ahead. Budgetary reviews that help the Pentagon save money will become even more important, Smith said. But he stopped short of discussing particular programs that could be pared back to instead fund new approaches to military capabilities or to spend that money on pandemic response. Smith also said he doesn’t expect the National Defense Authorization Act to be scaled back as a result of the pandemic, but suggested it’s increasingly unlikely the NDAA will become law by the start of the next fiscal year on Oct. 1. 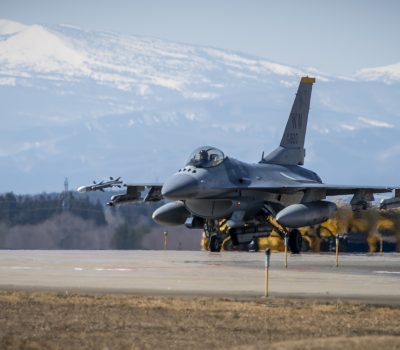 By Amy Hudson
Pacific Air Forces has been fine-tuning the Agile Combat Employment concept in training exercises for years, but the new coronavirus outbreak has required real-world execution. As the pandemic continues to spread across the globe, PACAF has cut back on its overall flying engagements. Some exercises have been curtailed, or canceled altogether, such as Red Flag-Alaska. And, travel restrictions—both from the Department of Defense and other countries—have forced the command to get creative when it comes to partner engagements, Maj. Gen. Scott Pleus, the command’s director of air and cyberspace operations, told Air Force Magazine. However, COVID-19 has not impacted PACAF’s ability to accomplish its core missions. 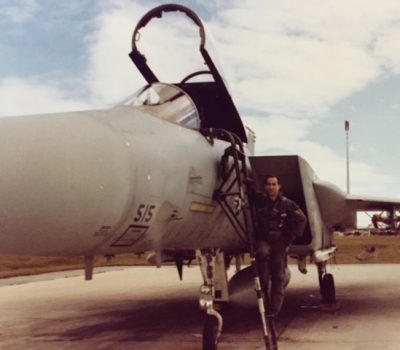 By Jennifer-Leigh Oprihory
Sal Speziale studied in the halls of the U.S. Air Force Academy, flew the F-4 and F-15, and worked at the Pentagon while part of the Active duty Air Force. He later served with the District of Columbia Air National Guard, and spent over three decades as a commercial pilot with American Airlines. But though he's hung up his multitude of uniforms, the fighter pilot-turned-restaurateur is serving his country in a new way: By keeping the hospital workers and first responders on the frontlines of the war against the COVID-19 pandemic fed. 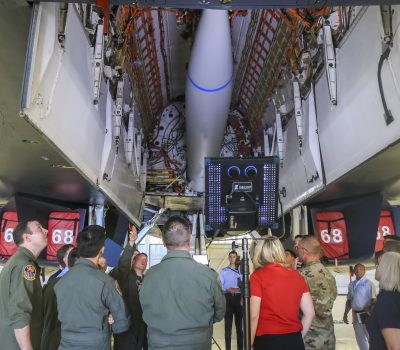 By John A. Tirpak
The ARRW hypersonic missile would equip B-1Bs refurbished and updated for a more potent long-range strike capability, Global Strike Command chief Gen. Timothy Ray said. The hypersonic missiles would be mounted on the external hardpoints once planned to carry AGM-86B Air-Launched Cruise Missiles, but not used since B-1s exited the nuclear mission. Ray also said that while AFGSC has not asked for a conventional version of the Long-Range Stand-Off weapon, if a conventional very-long-range missile is needed, he'd "start with" the LRSO.

Acting Navy Secretary Thomas Modly resigned April 7 after traveling nearly 8,000 miles to Guam to berate thousands of sailors on April 6, later saying he stood "by every word," and then subsequently apologizing for the remarks within the span of about eight hours.

President Donald Trump moved rapidly on April 6 to approve a request from New York Gov. Andrew Cuomo to make the Navy hospital ship Comfort available to treat patients with novel coronavirus—a reversal of original plans to use the ship to treat those not diagnosed with the disease.

Cobham is proud to announce that it has successfully modified its existing hardware used for oxygen systems in military aircraft to create an air pressure regulator, which can be used within a ventilator system to precisely control the flow of oxygen to the patient.

The Launch of Three U.S. Spy Satellites Is Delayed Due to COVID-19

The rapid spread of COVID-19 around the globe has delayed the launch of three U.S. intelligence payloads from New Zealand until at least April 23, launch provider Rocket Lab confirmed April 6.

The Air Force has awarded Lockheed Martin a $167 million contract for 48 Long-Range Anti-Ship Missiles on behalf of the service and the Navy, according to an April 7 Defense Department announcement.

The U.S. Air Force Academy class of 2020 will graduate on April 18—six weeks ahead of schedule and without spectators due to the coronavirus pandemic. Of the class of about 1,000 cadets who will be commissioned as lieutenants, 88 will join the U.S. Space Force, said Chief of Space Operations Gen. Jay Raymond.

Militants Fire RPG at C-130 then an MQ-9 Reaper Crew Promptly Locates, Tracks, and Kills Them

The U.S. Air Force has released video that includes a unique clip that an MQ-9 Reaper captured of militants firing a rocket-propelled grenade at a C-130 Hercules airlifter that was performing an air drop of cargo at relatively low altitude. In the full video, the drone's pilot and sensor operator, who later struck those hostile forces, also offer an interesting behind-the-scenes look at how the unmanned aircraft perform these kinds of armed overwatch missions.