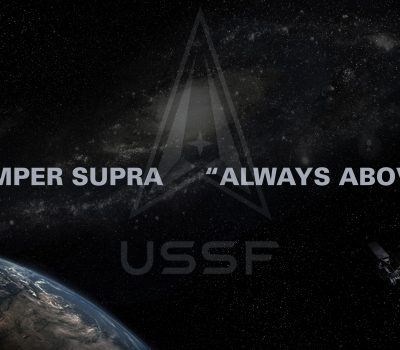 By Rachel S. Cohen
The Space Force on Aug. 10 rolled out its inaugural policy document that will govern how it organizes, trains, and equips service members for military space operations. The new doctrine solidifies the interdependence of civil, military, intelligence, and commercial players as the U.S. tries to return to the moon and push farther to Mars, as well as protect its satellites and other spacecraft from attack and support a growing number of private-sector ventures past the Earth’s atmosphere. “Preserving freedom of action in space is the essence of military space power and must be the first priority of military space forces,” said the Space Capstone Publication, the product of a year’s worth of work. 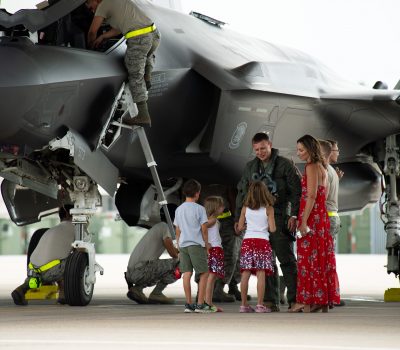 By Jennifer-Leigh Oprihory
The Department of the Air Force recently released an assessment of public education quality in school districts serving USAF installations, and of how supportive states are of Airmen, space professionals, and their families when it comes to transferring professional licenses. The department will use the findings, based on data available as of 2019, to inform future basing decisions, and hopes the results will motivate communities to lessen the challenges military families face in the areas of education and military spouse unemployment, a background document about the effort explained. “In turn, these efforts will strengthen member retention, improve quality of life and ease transitions for our Airmen and Space professionals,” the document stated. 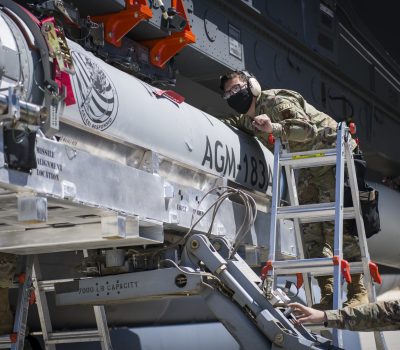 By Brian W. Everstine
The AGM-183A Air-Launched Rapid Response Weapon (ARRW), the Air Force’s first hypersonic weapon, completed its last captive-carry test flight on a B-52 on Aug. 8. During the test, which was conducted off the coast of Southern California, the AGM-183A Instrumented Measurement Vehicle-2 transmitted telemetry and GPS data to ground stations at the Point Mugu Sea Range verifying the weapon’s integration with the B-52. During the test, the AGM-183A also practiced a concept of operations that will be used in its first Booster Test Flight, to be held later this year, according to an Air Force release. The AGM-183A ARRW is a rapid prototype effort, with initial operational capability expected by 2022. 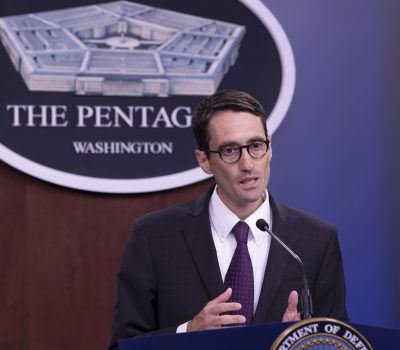 By Rachel S. Cohen
Stephen L. Kitay, deputy assistant secretary of defense for space policy, will leave his job at the end of the month, he said in an Aug. 8 letter posted to social media. “While the department’s critical mission will never be complete, I have a very exciting opportunity in the private sector that my family and I decided to pursue,” he wrote. Kitay’s resignation as one of the Pentagon’s top space policy officials takes effect Aug. 21. The Defense Department did not immediately respond to a request for comment on who will fill the position once he leaves. He has held the job since June 2017. 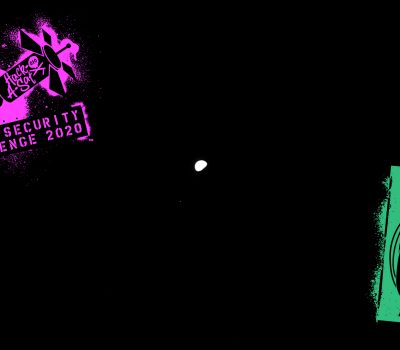 By Alyk Russell Kenlan
Eight groups of hackers attempted to to take control of a Defense Department satellite on Aug. 9. The weekend-long event, called “Hack-A-Sat,” was intended to spur interest in cybersecurity and help the DOD and the Air Force learn about unforeseen security risks. The event was in collaboration with DEF CON Safe Mode, an annual hacking convention that was run virtually this year due to COVID-19 concerns. The competition consisted of five hacking challenges that culminated in taking control of an active satellite and taking a photo of the moon. “Letting experts hack an orbiting satellite will teach us how to build more secure systems in the future,” Will Roper, assistant secretary of the Air Force for acquisition, technology, and logistics said in an Aug. 3 press release.

Esper Says US Troop Presence in Afghanistan Will Be ‘Less than 5,000’ by November

Defense Secretary Mark T. Esper said in an interview broadcast late Aug. 8 that no more than 5,000 U.S. troops would remain in Afghanistan by the end of November as the Trump administration looks to move forward with a reduction of forces in the region.

Russia Warns It Will See Any Incoming Missile as Nuclear

Russia will perceive any ballistic missile launched at its territory as a nuclear attack that warrants a nuclear retaliation, the military warned in an article published Aug. 7. The harsh warning in the official military newspaper Krasnaya Zvezda (Red Star) is directed at the United States, which has worked to develop long-range non-nuclear weapons.

The fielding of a U.S. Air Force radar to detect ballistic missile threats, currently being installed at Clear Air Force Station, Alaska, is delayed by roughly a year, according to a recent Government Accountability Office report. Information provided by the Missile Defense Agency in June to the GAO indicated all construction and integration activities for the Long Range Discrimination Radar had stopped in March due to the coronavirus pandemic.

The U.S. military has updated its handbook on electronic warfare, changing it to a more all-encompassing, cross-branch approach for planning, executing, and assessing operations on the electromagnetic spectrum. The document, which is dated May 2020 but was not made public until late July, eliminates and replaces the previous joint publication for electronic warfare and provides principles and guidance related to joint electromagnetic spectrum operations, or JEMSO.

Retiring CMSAF Wright Talks Candidly about the Future of the Air Force, His George Floyd Post, and ‘Enlisted Jesus’ Memes

When Chief Master Sergeant of the Air Force Kaleth O. Wright retires after 31 years of service, he will leave as one of the most consequential chief master sergeants of the Air Force. Not only did he lead the way on the diversity issue, but Wright also helped push the Air Force to do more on suicide prevention and improving Airmen’s emotional resiliency.

White House officials agreed to cover all of the costs of National Guard coronavirus response missions for three additional states on Friday, signaling that the federal government may eventually do the same for more states in coming months.

“Low-key deployments by citizen-soldiers have strengthened ties with 89 nations—but some crucial partners are missing,” write Bradley Bowman, senior director of the Center on Military and Political Power at the Foundation for Defense of Democracies, and Maj. Thomas G. Pledger, a visiting military analyst there.

Nagasaki Urges Nuke Ban on 75th Anniversary of US A-Bombing

The Japanese city of Nagasaki on Aug. 9 marked its 75th anniversary of the U.S. atomic bombing, with the mayor and dwindling survivors urging world leaders, including their own, to do more for a nuclear weapons ban.

The Pentagon is conducting its first survey in more than 30 years specifically focused on the reproductive health of female service members, according to an Aug. 4 release from the Military Health System Communications Office. It begins this month.

The initial deployment at a Spokane, Wash., medical center is now scheduled for October, while the new scheduling system will begin rolling out in August.

This Navy Ship Is Taxiing WWII Warbirds to Hawaii

A U.S. Navy warship that typically sees F-35 Joint Strike Fighters and MV-22B Osprey tiltrotors crowding her flight deck is carrying a cargo of vintage airplanes instead. The amphibious assault ship USS Essex is making the trip from San Diego to Pearl Harbor with 14 World War II fighters, bombers, and trainers aboard, all scheduled to take part in a commemoration of World War II in the Pacific.