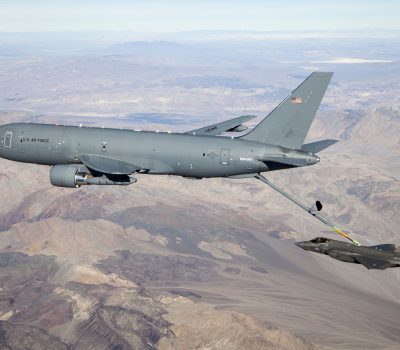 First ABMS Tool Could Be This Tanker Pod

By Brian W. Everstine
An artificial intelligence-powered mission-planning pod is slated to be the first capability deployed under the Air Force's Advanced Battle Management System concept, possible next year using technologies demonstrated in the series of combat experiments known as “on-ramps,” according to the Air Force’s top weapons buyer and the head of Air Mobility Command. The pod could ride on KC-46s or KC-135s as a way to give tanker planes a bigger combat role. 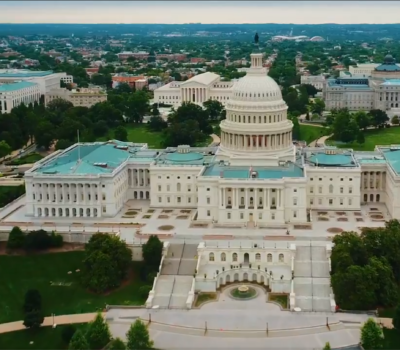 By Rachel S. Cohen
The Senate passed the fiscal 2021 defense policy bill 84-13 on Dec. 11 after a bumpy few weeks for the key annual legislation. “We must protect freedom, democracy and peace, and support our troops. This is the heart of the National Defense Authorization Act, and I look forward to it becoming law before the end of the year,” Senate Armed Services Committee Chairman Sen. Jim Inhofe (R-Okla.) said in a release. While both chambers of Congress have now approved the legislation, President Donald J. Trump must still sign off for it to become law. 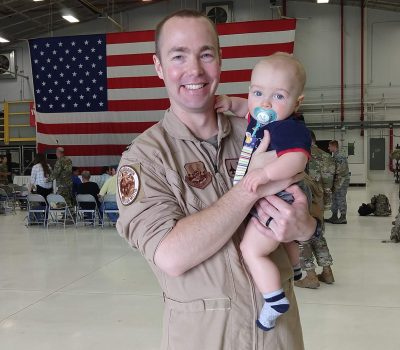 By Brian W. Everstine
The 115th Fighter Wing identified Capt. Durwood “Hawk” Jones, 37, as the F-16 pilot killed when his jet crashed in Michigan on Dec. 8. Jones, from Albuquerque, N.M., was flying a routine training mission when the F-16 crashed in the Hiawatha National Forest in Michigan’s Upper Peninsula. Wing Commander Col. Bart Van Roo said during a Dec. 11 press conference that the wing's flying operations are paused. 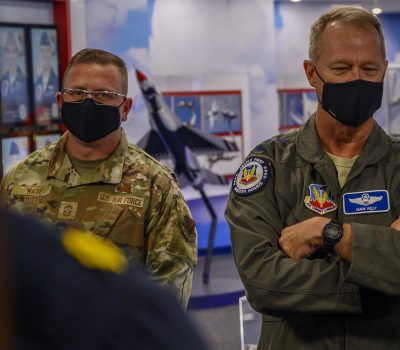 By John A. Tirpak
Exhausted by almost 20 years of nonstop combat against violent extremism, the Air Force is seeking a new cycle of modernization and refurbishment, Air Combat Command chief Gen. Mark D. Kelly said Dec. 11. The new construct would routinely change out old gear and modernize equipment, rather than allow a backlog of needed replacements to grow indefinitely. The Air Force wants a model that is easy to understand, as the Navy has managed to do, he said. 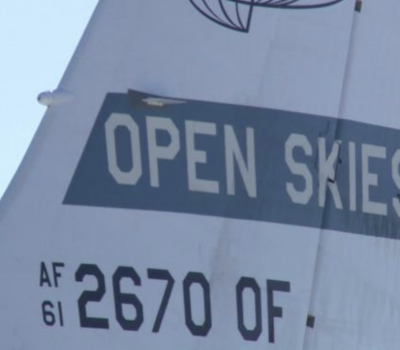 By Rachel S. Cohen
As the United States closes out its participation in the 1992 Open Skies Treaty, some in government are starting to consider what might come next for the Air Force unit that has handled those foreign surveillance flights for decades. Lawmakers earlier this month released a bipartisan, bicameral agreement on the fiscal 2021 defense policy bill, known as the National Defense Authorization Act. If enacted, that legislation and its accompanying instructions would tell the Air Force Secretary to study what other missions the OC-135Bs could take on. 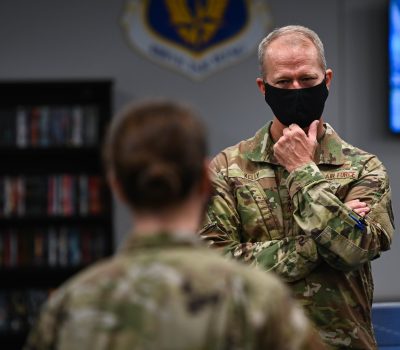 By John A. Tirpak
The Air Force must make the mindset change from focusing just on preparation for conflict to day-to-day competition with Russia, China and other adversaries, Air Combat Command chief Gen. Mark D. Kelly said Dec. 11. The service will be constantly vying for superiority in the cyber realm and in situational awareness than it will be in kinetic conflict, and must adjust its thinking accordingly, Kelly said. He's given 16th Air Force the duty to lead this cultural shift. He also discussed what fourth-generation fighters need to stay relevant, and the need for dominance in the electromagnetic spectrum. 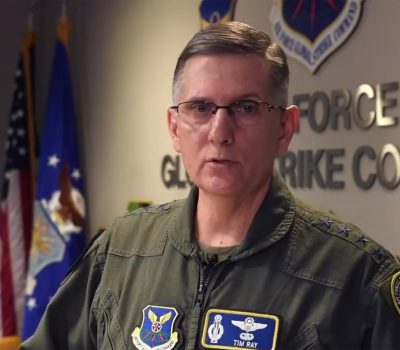 By Jennifer-Leigh Oprihory
China’s nascent identity as a nuclear-capable power and Russia’s nuclear modernization plan underscore the continued need for America’s nuclear triad, the head of Air Force Global Strike Command said Dec. 10. “There's a myth out there that nukes are less relevant,” AFGSC boss Gen. Timothy M. Ray said in a pre-recorded keynote broadcast during the 20th Nuclear Triad Symposium, which was co-hosted by AFA’s Mitchell Institute for Aerospace Studies, the Louisiana Tech Research Institute, and the Cyber Innovation Center on Dec. 10. As global powers consider the future of nuclear arms-control agreements, Ray urged a combination of both modernization and pacts to keep the world safe.

Airman Benjamin Nevoraski’s story is one a lot of people who’ve joined the armed services can tell: he had the feeling that life wasn’t going the way he wanted it to go, so he shook things up. On Dec. 10, when he graduated from basic training, the Air Force Secretary and two generals had a word with him.

In an 8-0 opinion issued Thursday, the U.S. Supreme Court ruled that military personnel accused of a rape between 1986 and 2006—a period previously subject to a five-year statute of limitations—can be charged for the crime.

Retired Army Gen. Lloyd J. Austin III, President-elect Joe Biden’s choice for defense secretary, may have to stay out of decisions on the Pentagon’s costliest weapons system, the F-35 Joint Strike Fighter, because of his ties to its engine-maker, Raytheon Technologies Corp.

A survey of military organizations conducted by the Government Business Council and satellite operator ViaSat reveals that many don’t have access to modern technologies to communicate and share data despite growing availability of commercial satellite services.

Mitchell Institute’s ‘Aerospace Advantage’ Podcast, Ep. 2: ‘An Air Force on the Brink: The Case for Modernization’

In Episode 2, host John Baum asks a crucial question: “Why is the Air Force aircraft inventory so small and old?” In gaining better insight regarding how we got here, the episode also emphasizes important lessons that will prove crucial to the service as it seeks to buy the next generation of combat aircraft. To dig into the details surrounding this challenge, Baum speaks with individuals who had a front-row view of key historic decisions, including retired USAF Col. Mark “Gonzo” Gunzinger, the Mitchell Institute’s director of future concepts and capability assessments, and retired USAF Gen. John Corley, former Air Combat Command commander.

USAF Solicits Bids on $953M Contract to Revamp Base Defense in Europe, Africa

The Air Force released a solicitation on Dec. 9 inviting defense industry companies to apply for a $953 million contract to support more aggressive U.S. air base air defense in Europe and Africa as the service adapts its power projection concepts to operate under a greater threat of attack.

Dayton, Ohio, is now an Air Force Innovation digital hub, a designation that Air Force and Dayton advocates say should open doors to greater cooperation between private-sector innovators and Air Force decision-makers. The designation was announced on Dec. 11 at the virtual AFWERX Accelerate event.

The latest addition to the PBS AEROSPACE Inc. engine’s stable is the PBS TJ100P—a response to the growing demand for a wide variety of small tactical UAVs and missile systems that require reliable engines of greater thrust, performance, and lower overall cost.

The Air Force Association offers more than $190,000 annually in scholarships, program, grants, and educator awards. AFA is a top supporter of aerospace education. Join today to be a part of the force behind the Air and Space Forces. Airmen and Space Professionals—Active, Guard, Reserve, and civilian—are eligible for free 3-year memberships with AFA!

For Air Force Leader, Making Video on Racism He's Faced Was ‘the Right Thing to Do’

Just before Gen. Charles Q. Brown Jr. was confirmed as Air Force Chief of Staff in June, he issued an emotional and personal video message about racism in the military. At the time, the country was roiling in the wake of the police killing of George Floyd, and Brown, who is Black, felt compelled to speak out. On NPR's “Morning Edition,” he explains why.

The U.S. Navy has announced that its Boeing MQ-25 Stingray unmanned aerial vehicles, which will provide aerial refueling from its aircraft carriers, will be operated by warrant officers with a new specialty designation—the aerial vehicle operator. This comes as the flight-test program for the drone continues to make progress, with a first sortie recently flown with the refueling pod attached.

Efforts are underway to rescue a sailor from the aircraft carrier USS Theodore Roosevelt who may have gone overboard on Dec. 10, Navy officials have announced.

Team Tempest and the Royal Air Force recently held a virtual event to provide an update about the development opportunities of the new sixth-generation aircraft to industry and government representatives from Northern Ireland, the first of a series of events to engage with industries across the U.K.