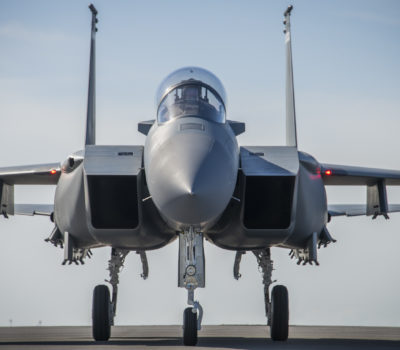 By Brian W. Everstine
The Air Force unveiled the name of its newest fighter jet—the F-15EX Eagle II—during an April 7 ceremony at Eglin Air Force Base, Fla. ANG Director Lt. Gen. Michael A. Loh said during the ceremony the F-15EX’s improvements will be key to its mission of homeland defense. The Air National Guard will be the first to receive the new jet operationally. Lt. Gen. Duke Z. Richardson, the military deputy in the Office of the Assistant Secretary of the Air Force for Acquisition, Technology, and Logistics, said new approaches in digital engineering will speed up the acquisition timeline. The first two F-15EXs will be delivered within nine months of the contract award, as opposed to the normal 39 months, Richardson said. This is key, given that 10 percent of the fleet is grounded due to structural issues, with 75 percent flying beyond their certified service life, he said. 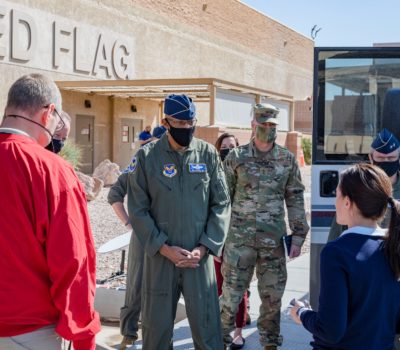 By Shaun Waterman
The Air Force is experimenting with the use of 5G technology to provide mobile, distributed command and control and it eventually hopes to be able to do away altogether with fixed location air operations centers, according to the service’s deputy chief technology officer. "Today’s air operation centers are static, easy targets to hit that are considered a huge ... liability. There’s no resilience there," James “Rob” Beutel said April 7, during a virtual AFCEA DC event. 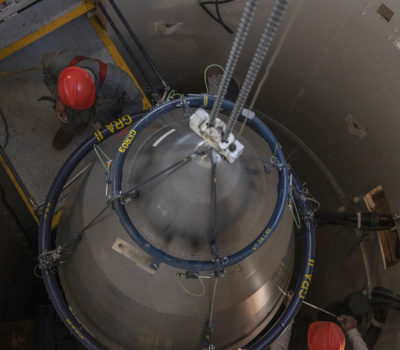 GBSD Passes Integrated Baseline Review, on Pace for IOC In 2029

By Brian W. Everstine
Northrop Grumman successfully completed the integrated baseline review for the Ground Based Strategic Deterrent program, which is on track for initial operational capability by 2029. The integrated baseline review sets the cost and schedule baseline, identifies risk, and ensures there are mitigation plans ready for the program. It occurs within 180 days of contract award. The company and the Air Force worked together early in the process to meet the deadline, according to an April 7 Northrop release. 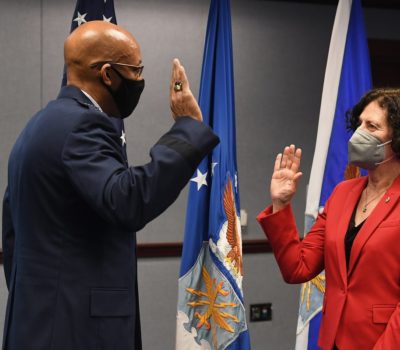 By Brian W. Everstine
The Air Force has a new chief scientist: Victoria Coleman, who most recently was the director of the Defense Advanced Research Projects Agency. Coleman started in her role as the 37th chief scientist of the Air Force last week, and was ceremoniously sworn in by Chief of Staff of the Air Force Gen. Charles Q. Brown Jr. on April 6. Coleman served as the leader of DARPA from November 2020 to Inauguration Day in January. She replaced Richard J. Joseph, who served in the role since 2018. 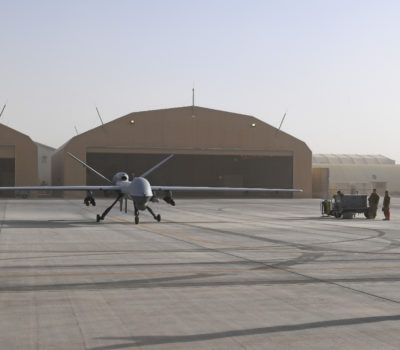 By Brian W. Everstine
The Taliban targeted Kandahar Airfield, Afghanistan, with rockets on April 7, and though no casualties were reported, the Pentagon said the attack is a threat to fragile peace discussions in the country. Preliminary reports showed the rockets landed outside the perimeter of the airfield, with no casualties and no damage, Pentagon spokesman John F. Kirby said. Kandahar has served as a key airfield for U.S. forces and has been the headquarters of Train, Advise, Assist Command-South, with American and NATO forces based on the installation. 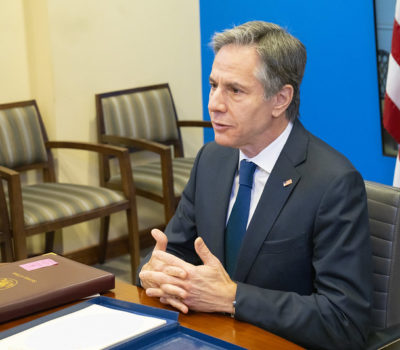 By Brian W. Everstine
U.S. and Iraqi officials, during a joint strategic discussion April 7, agreed to start talks on the eventual removal of American combat troops from Iraq as Iraqi Security Forces grow in capacity. Secretary of State Antony J. Blinken and Iraqi Minister of Foreign Affairs Fuad Hussein led the virtual discussion aimed at reaffirming relationships between the two countries, including on security and counterterrorism, among other areas. The sides agreed to further bilateral security coordination, with a light at the end of the tunnel for combat deployments to the country.

A trial begins April 7 in San Antonio in a lawsuit filed by more than three dozen families against the U.S. government over allegations that the Air Force is liable for the November 2017 massacre at First Baptist Church in Sutherland Springs that left 26 worshipers dead and 20 more injured.

The National Aeronautic Association (NAA) has selected the Tuskegee Airmen as the recipient of the 2021 Clifford Henderson Trophy.

Nearly nine years ago, the Senate Armed Services Committee reported the results of an investigation of counterfeit electronic parts in the U.S. military. The year-long probe found fully 1 million bogus parts, including components for several types of combat aircraft.

The U.S. military in Japan reported 16 new cases of COVID-19, all but four on Okinawa, by 6 p.m. on April 6. Misawa Air Base, in northeast Japan, had one person test positive for COVID-19 after returning from a trip to Osaka, according to a base news release on April 5. That person is quarantined. The base had not announced a new coronavirus patient since Jan. 22, when it reported three.

Top Air Force IT Leader Has ‘Mixed Feelings’ about CMMC

The Air Force’s chief information officer has concerns about how the Department of Defense’s new cyber standards for contractors could harm small businesses trying to enter the defense market.

Air Force Fitness Test is Practical, But the Service Could do Better, Study Says

A new study out April 6 encourages the Air Force to retool parts of its fitness test to incorporate more practical measures of everyday health, while keeping features like the 1.5-mile run.

Similar to other members of the intelligence community, the U.S. Space Force is responsible for advancing intelligence-related mission objectives for U.S. national security. The service is performing space-related intelligence, surveillance, and reconnaissance to provide key information and data to the community. Being part of the intelligence community is an important step for the year-old service, said Maj. Gen. Leah Lauderback, USAF, director of Intelligence Surveillance and Reconnaissance for the U.S. Space Force, speaking April 2 during a virtual Mitchell Institute for Aerospace Studies event.

If China ever makes good on decades of threats and posturing and attacks Taiwan, Chinese hackers, rocketeers, and bomber crews likely would fire the first shots, initiating a potentially devastating war that could draw in the United States and remake the world order.

BAE Systems has tested its Small Adaptive Bank of Electronic Resources (SABER) technology on a total of 11 flights of an EC-130H Compass Call aircraft. The flight tests were carried out along with teams from the U.S. Air Force at Davis-Monthan Air Force Base in Arizona.

U.S. Northern Command executed the second in a series of Global Information Dominance Experiments earlier this spring, according to an April 6 announcement.

Next month, the Korean War Veterans Memorial on the National Mall will have a new focal point—a remembrance wall featuring the names of approximately 36,574 Americans who died supporting the war and more than 7,200 Koreans who died while augmenting the Army. Their names will be organized by rank and respective branch of service, demonstrating how the war’s burden fell unevenly across the military.