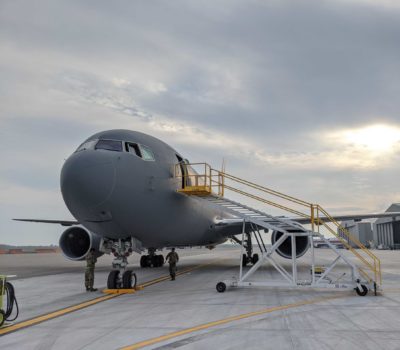 Inside a KC-46 Refueling Flight

By Brian W. Everstine
Air Force Magazine on May 25 flew aboard a KC-46 during a refueling flight as part of Air Mobility Command’s major exercise Mobility Guardian 2021 in Michigan, the first time an independent media outlet has flown on the new tanker. The KC-46 from McConnell Air Force Base, Kansas, refueled four F-16s during a daylight flight, showcasing both the capabilities and issues with the jet’s infamous remote vision system, which will be replaced before the jet can be declared operational. 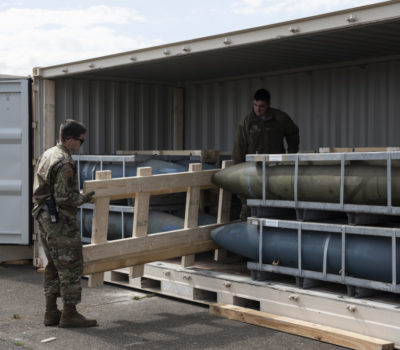 By John A. Tirpak
Frank Kendall, nominee to be Air Force Secretary, hinted that it may be time to resurrect the Cold War practice of dual-sourcing munitions to maintain wartime surge capacity. He also warned against any jointly managed acquisition programs and suggested that the Air Force will have to live with a mix of fourth- and fifth-generation aircraft for at least a decade. The observations come from Kendall's written answers to questions posed by Senators ahead of his May 25 confirmation hearing. 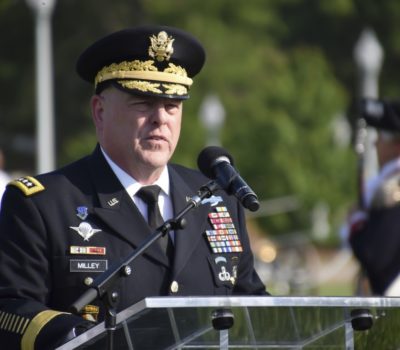 By Greg Hadley
The next Chairman of the Joint Chiefs of Staff could well be an Airman or Guardian, hinted Army Gen. Mark A. Milley, the current CJCS, while speaking at the graduation ceremony for the U.S. Air Force Academy on May 26. Air Force Chief of Staff Gen. Charles Q. Brown Jr. and Space Force Chief of Space Operations Gen. John W. “Jay” Raymond are the obvious candidates. "I want to thank the next Chairman of the Joint Chiefs of Staff—it's going to be either Brown or Raymond. Take your pick, Space or Air Force," Milley said in a half-joking tone after thanking Acting Air Force Secretary John P. Roth for his attendance. 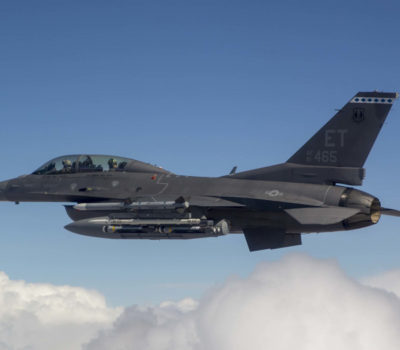 By John A. Tirpak
In a multi-faceted test, six bombs that were dropped from two F-16s over White Sands Missile Range, New Mexico, set up their own communications network, received new targets in-flight, and struck the targets collaboratively in a synchronized fashion, the Air Force Research Laboratory announced. The technology was compared to the advent of laser-guided bombs as a major shift in weapons capabilities.

Iraq Militia Chief Arrested Over Attacks on Base Hosting US Forces

Iraqi security forces on May 26 arrested senior militia commander Qasim Muslih under the country's anti-terrorism law, the military said, in a move security sources said was linked to attacks on a base that hosts U.S. forces. Muslih was arrested at dawn and is being questioned by a joint investigative committee about the criminal charges against him, a military statement added, without giving further details. Two security sources with direct knowledge of the arrest told Reuters that the militia chief was arrested in Baghdad for involvement in several attacks including recent assaults on al-Asad Air Base, which hosts U.S. and other international forces.

The United States will press forward with ending Turkey’s role in producing parts for the F-35 Joint Strike Fighter, Air Force Secretary nominee Frank Kendall said at his Senate confirmation hearing on May 25. Turkey was officially kicked out of the F-35 program in 2019 under the Trump administration for agreeing to purchase Russia’s S-400 air defense system in 2017. U.S. officials had repeatedly warned the purchase would jeopardize Turkey’s role in the multinational fighter program because operating both systems could expose F-35 vulnerabilities to Russia.

Mysterious Air Base Being Built on Volcanic Island Off Yemen

A mysterious air base is being built on a volcanic island off Yemen that sits in one of the world’s crucial maritime chokepoints for both energy shipments and commercial cargo. While no country has claimed the Mayun Island air base in the Bab el-Mandeb Strait, shipping traffic associated with a prior attempt to build a massive runway across the 5.6-kilometer (3.5 mile)-long island years ago links back to the United Arab Emirates.

John W. Warner, Senator from Virginia and Force on Military Affairs, Dies at 94

John W. Warner, the five-term U.S. senator from Virginia who helped plan the nation’s 1976 bicentennial celebrations, played a central role in military affairs, and gained respect on both sides of the political aisle for his diligence, consensus-building and independence, died May 24 at his home in Alexandria, Va. He was 94. His former chief of staff Susan Magill announced the death and said the cause was a heart ailment. Because of his willingness to buck his increasingly conservative party, Mr. Warner became the Republican whom many Virginia independents and Democrats respected and voted for. By the time he retired in 2009, he held the second-longest tenure of any senator from Virginia.

A Flying Car Could Be the Air Force's Next Medevac Transport

A flying ambulance heads to a remote airfield somewhere in the Pacific. With or without a pilot behind the controls, it's able to land vertically, like a helicopter, near a base where troops are under attack. A wounded service member boards and straps into wearable technologies that monitor his condition, and the aircraft takes off to a site where his injuries can be treated. It's a scenario that Lt. Gen. S. Clinton Hinote, the Air Force’s deputy chief of staff for strategy, integration, and requirements, envisions for the service's "flying car" effort. That initiative, while in the nascent stages, has the potential to save lives or deliver critical equipment, all while decreasing the service's carbon footprint, he added.

The Chinese government has created a company dedicated to creating and operating a 13,000-satellite broadband constellation. The State-Owned Assets Supervision and Administration Commission, a government body overseeing state-owned enterprises, issued a press release April 29 announcing the creation of the China Satellite Network Group Co. Ltd. The move follows comments from senior space industry officials earlier in the year that a company will be formed to oversee a national low Earth orbit broadband constellation.

Lawmakers and victims’ advocates blasted defense officials on May 25 for an incomplete and inadequate response to domestic violence incidents in the ranks, saying they may be undermining faith in military leadership by overlooking large numbers of cases annually. “Excuses are over. The safety and wellbeing of our service members is at risk,” said Rep. Jackie Speier, chairwoman of the House Armed Services Committee’s personnel panel. “We know that over 40,000 incidents met DOD criteria for domestic abuse between 2015 and 2019 and that 74 percent of those incidents were physical abuse. But how many were never counted by the department? How many were never reported? For more than 20 years, no one can say.”

The Pentagon’s budget process is not agile enough to quickly get emerging technology to soldiers on the battlefield, President Joe Biden’s pick to oversee the Defense Department’s research and engineering efforts told Congress. The largest roadblock, according to Heidi Shyu, is something known as the program objective memorandum, the Pentagon’s internal five-year spending plan more often called the POM. It typically takes two years at a minimum before funding for new projects can get put into the so-called POM.

The Russian military said May 25 it has deployed three nuclear-capable long-range bombers to its base in Syria, a move that could strengthen Moscow's military foothold in the Mediterranean. Russia's Defense Ministry said three Tu-22M3 bombers have arrived at the Hemeimeem air base, located in Syria's coastal province of Latakia and the main hub for Moscow's operations in the country. The ministry said bomber crews would fly a series of training missions over the Mediterranean. The Tupolev Tu-22M3, code-named Backfire by NATO, is a supersonic twin-engine long-range bomber which is capable of carrying nuclear weapons and has a range exceeding 5,000 kilometers (3,100 miles).

South Korea can now develop ballistic missiles capable of reaching targets far beyond the Korean Peninsula, following the United States’ approval to lift a 42-year-old restriction on its ally’s missile development program. South Korean and U.S. leaders announced the termination of missile guidelines imposed on Seoul in 1979. At the time, South Korea wanted to acquire American technology to develop its own missiles, and in return, the Asian nation agreed to limit the range of its missiles to 180 kilometers with a maximum payload of 500 kilograms.

The Biden administration’s nominee for the role of top technology official at the Department of Defense wants to see an overhaul of budgeting processes that could allow for more innovation and lower sustainment costs. At a confirmation hearing May 25 before the Senate Armed Services Committee, Heidi Shyu told Senators that extra early-stage funding for the DOD’s weapons platforms, tech projects, and other systems would keep programs running and help to curtail their costs in the long term.

The Department of the Air Force has taken a big step toward enabling data sharing across the Air and Space Forces. Last week, the service completed four options, each with its own technical architecture, to be presented to the Air Force Department’s senior leadership for review. A decision is expected in June. Once leaders pick an option, the Air Force’s Chief Architect Integration Office will begin building a minimum viable product.

America’s new way of war, soon to be articulated in the Joint Warfighting Concept, will require more and different intra-theater lift capabilities, says the outgoing head of U.S. Transportation Command. “What we see, as we look to the future, is actually some increasing demands on the logistics enterprise, and specifically with regard to intra-theater transport, whether that be surface oriented with more shallow-draft kinds of vessels or air mobility,” Gen. Stephen Lyons told the Hudson Institute.

Last year, on one of the northernmost air bases in the world, Russia’s military laid the final stretch of reinforced concrete on a runway to make it long enough to handle modern jet fighters and strategic bombers. The finishing touches to Nagurskoye Airbase, located on a largely ice-locked archipelago in the Arctic Ocean, are turning a once-abandoned staging point for Soviet aircraft into one of Russia’s most advanced military outposts. It is one in a string of new and refurbished bases meant to service the Kremlin’s ambitions in the resource-rich Arctic.

The Trojan Horse and Pearl Harbor might spring to mind. HistoryNet rounds up those and seven more, from ancient Rome to Vietnam.