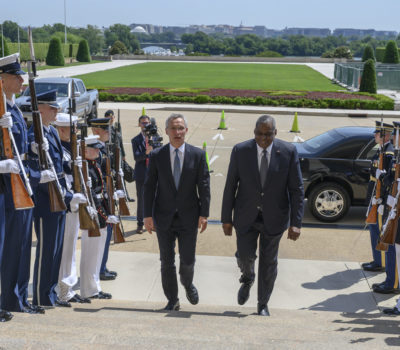 Afghanistan Withdrawal ‘Halfway Finished’ as US, NATO Look for New Ways to Advise

By Brian W. Everstine
U.S. forces are about half way done with the planned withdrawal from Afghanistan as the U.S. and NATO pledge to continue support in new ways. U.S. Central Command boss Gen. Kenneth F. McKenzie Jr. said June 7 that with so much progress already, “we will make the September deadline to complete the full withdrawal from Afghanistan," though he noted the U.S. will still maintain an embassy in the country and continue to support Afghan forces. 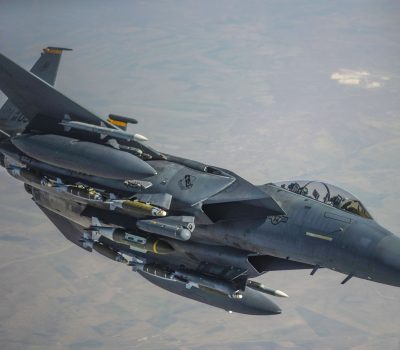 By John A. Tirpak
Funding for munitions may have taken a hit in the Air Force's 2022 budget request, but Air Force Materiel Command boss Gen. Arnold W. Bunch Jr insists munitions are not serving as the billpayer for other parts of the budget. Bunch said the “pipeline” will remain open for more production if needed—and Foreign Military Sales customers are being encouraged to buy—but the savings are being used to increase purchases of weapons for a “high-end fight." 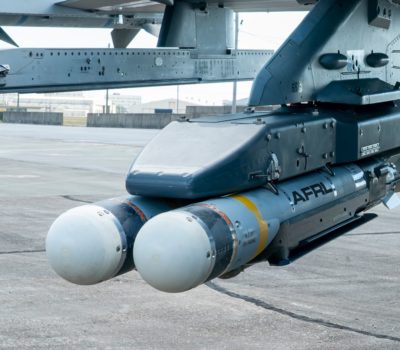 Despite Golden Horde Success, USAF Not Ready to Make Technology Program of Record

By John A. Tirpak
The Golden Horde Vanguard program yielded good results but will not advance into a program of record just yet, Air Force Materiel Command boss Gen. Arnold W. Bunch Jr. told reporters. “We haven’t finalized” what will be done with the technology, he said. The program was a success at demonstrating collaboration and networking, and the next step is to take that knowledge and put it into simulations run by the Air Force Munitions Research Labs to “bring in new ideas and capabilities” about how it might be fielded, he said during a June 4 Defense Writers Group virtual event. 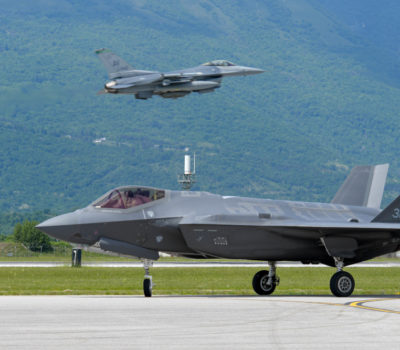 By Brian W. Everstine
F-35s from four nations are coming together in a large-scale exercise in Italy during which the fifth-generation fighters will fly alongside several fourth-generation jets. USAF F-35s from Hill Air Force Base, Utah, and F-16s from Aviano Air Base, Italy, are flying in exercise Falcon Strike 21 at Amendola Air Base, Italy, June 7-15. They will join U.S. Marine Corps F-35Bs, along with F-35As and F-35Bs from the Italian Air Force, F-35Bs from the United Kingdom Royal Air Force, and F-35Is from the Israeli Air Force. 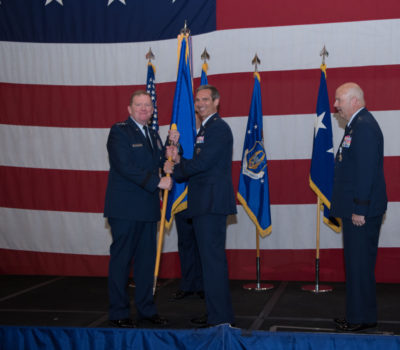 The Defense Department continues to move forward with its Joint All Domain Command and Control (JADC2) plan, with Secretary Lloyd J. Austin III signing the Joint Warfighting Concept document to enable the Joint Chiefs to better orient each service on the same page. But such a comprehensive system needs an all-encompassing cloud, and the Pentagon’s JEDI system, currently under contract to be made by Microsoft, may be imperiled by a lawsuit from Amazon Web Services.

“We contend that the U.S. military has neglected its responsibility to develop in its ranks a professional military ethos focused on service members’ oath to the Constitution. The oath is not to any individual or organization, but rather to the democratic processes and civil liberties that our Founders enumerated in the Constitution. Improved education and training on the meaning of the oath would strengthen service members’ core commitment to the nation and bring into focus behaviors that deviate from the ideals that bind us together as Americans,” write USAF Maj. Kelly Atkinson, a member of the faculty advisory board for The Oath Project at the U.S. Air Force Academy, and retired Col. Marybeth Ulrich, co-founder of The Oath Project.

Boeing’s MQ-25 Stingray completed the U.S. Navy’s first ever aerial refueling between a manned aircraft and an unmanned tanker June 4, successfully connecting and transferring fuel with a Navy F/A-18E-F Super Hornet at 10,000 feet. The MQ-25 operator was positioned in a ground control station and was in radio contact with the two F-18 pilots. More tests are scheduled throughout 2022 and 2023 in a series of more challenging conditions, altitudes, and situations.

More than five years ago, the Defense Department lifted its ban on women serving in ground combat roles. But in the Air Force, there are still only a handful of women in such positions, with the Air Force Special Operations Command featuring just six in an operational force with 4,000 total Active-duty special warfare billets. Officials say there has been a lack of interest but are working on increasing recruitment and training.

The U.S. Space Force has awarded a $1 billion contract to Lockheed Martin to operate and maintain the ground control systems of the Space Based Infrared System (SBIRS), part of the Defense Department’s missile warning network. The contract runs for five years and involves SBIRS’ geostationary satellites, run from operations centers at Buckley Space Force Base, Peterson Air Force Base, and Greeley Air National Guard Station, all in Colorado.

The U.S. Supreme Court declined to review a case challenging the requirement under federal law that only males have to register for the draft when they become legal adults. The case was brought by an organization called the National Coalition for Men, who were represented by the ACLU, and the plaintiffs asked the court to review the constitutionality of the Military Selective Service Act’s male-only requirement, calling it sex discrimination. In a three-page opinion, Justice Sonia Sotomayor, joined by Justices Stephen Breyer and Brett Kavanaugh, seemed to express doubt that the law was in fact constitutional but cited the “Court's longstanding deference to Congress on matters of national defense and military affairs” in declining to take on the case.

The U.S. Air Force uses the NT-43A aircraft to help develop and validate stealth technologies, but it is highly secretive and rarely seen. In newly unveiled photos from 2014, though, we get a glimpse of the heavily modified Boeing 737, often known by its callsign and nickname "RAT 55.” The 50-year-old airframe has some unusual features, presumably as part of its mission.

Russian President Vladimir Putin signed a bill June 7 confirming his country’s exit from the global treaty allowing surveillance flights over military facilities. U.S. President Joe Biden announced last month that America would also not re-enter the treaty after his predecessor, Donald Trump, initially withdrew from it in 2020. Trump cited violations of the treaty on Russia’s part as his reason for leaving the pact, and though Biden initially criticized the move, he reaffirmed it once in office. Biden and Putin are set to meet in Geneva, Switzerland, on June 16.

The richest man on Earth is now set to leave it—for a couple of minutes at least. Amazon founder and CEO Jeff Bezos announced Monday that he will be taking part in the first commercial flight of Blue Origin, the spaceflight company he founded, in July. The brief flight is a first in the long-anticipated space tourism business and will include Bezos, his brother Jeff, and the highest bidder in a charity auction.

Rainbow flags signaling support of LGBTQ rights will still not be permitted to fly at U.S. military bases and installations, as the Defense Department reaffirmed its stance on the matter June 4, a few days after the start of Pride Month. The decision, announced by Pentagon spokesperson John Kirby, follows the department’s ruling last year that effectively barred the Confederate flag from flying at any military installation. Only the U.S. flag, the flags of U.S. states and territories, flags for military services, prisoners of war and missing in action, national flags of U.S. allies, and a handful of others flags are allowed to be flown.

Egypt’s recent agreement to purchase 30 new Rafale jets from France could lead to more deals and a strengthened partnership between the two countries, as the Egyptian government will “probably” buy more air force equipment from the French, according to a defense analyst. In particular, Egypt is looking to acquire satellites and a multi-role tanker transport to equip its air force with aerial refueling capabilities.

German Military to Ship Surplus Beer Back from Afghanistan

Members of the German military are typically entitled to two cans of beer, or the equivalent, per day, but a commander in Afghanistan recently banned the consumption of alcohol for security reasons. What with U.S. and NATO forces continuing to withdraw from the country, that created a 22,600-liter surplus of beer, wine, and liquor that could not be sold or destroyed. Thankfully, a civilian contractor agreed to ship it all, including almost 60,000 cans of beer, back to Germany.