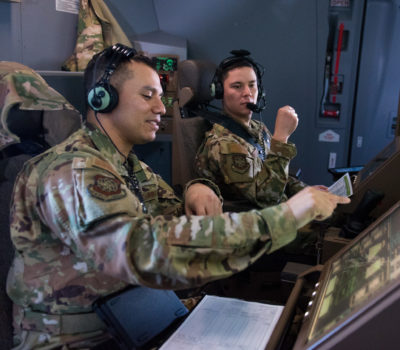 By Brian W. Everstine
A feature in the KC-46’s advanced refueling system, designed to improve safety and ease the burden on boom operators, is not working as designed, so the Air Force implemented a workaround. The problem is with the aircraft’s Aerial Refueling Software, which has preset limits for different types of receivers—aircraft needing fuel—to control the boom’s independent disconnect system. However, the presets in the system are not accurate to each receiver, so boom operators have to override the automatic preset limits and input correct ones. The problem was a Category II deficiency on the KC-46 before the workaround was implemented. 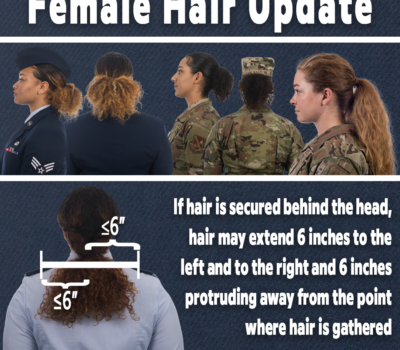 By Amy Hudson
The Air Force is once again changing hair standards for women to better address differences in hair texture and density. Beginning June 25, women’s hair may extend six inches to the left of the point where hair is gathered behind their head and six inches to the right, as long as they can still properly wear headgear. The updated guidance follows the January announcement that women in the Air Force and Space Force can now wear a single ponytail, or single or double braids, as long as the hairdo reaches no farther than their upper back and doesn’t exceed the width of their head. The January guidance also allowed eyebrow-length bangs. “Change doesn’t happen overnight, and sometimes it takes another iteration to arrive at the best solution,” Chief of Staff Gen. Charles Q. Brown Jr. said in a June 11 release. 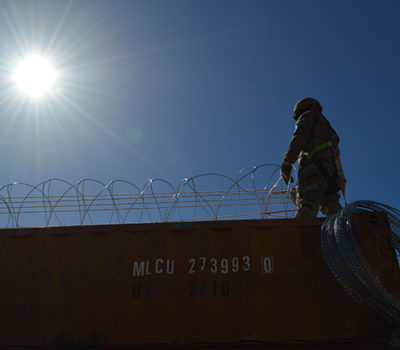 By Brian W. Everstine
The Pentagon announced June 11 it is restoring $2.2 billion of military construction funds that had been reprogrammed to pay for the construction of a wall on the southern border. The funding covers 66 projects in 11 states, three territories, and 16 countries. Pentagon spokesman John F. Kirby said in a briefing that the funding was unobligated, and comes out of a total of $3.6 billion that had been reprogrammed for the wall in fiscal 2021. The Trump Administration, beginning in 2019, moved military construction and operations and maintenance money to pay for the construction of the barrier. President Joe Biden on the day he was inaugurated issued a proclamation reversing the plan and repurposing the funding. 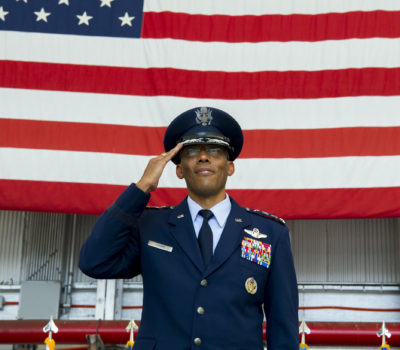 By Greg Hadley
Chief of Staff of the Air Force Gen. Charles Q. Brown Jr. hasn’t exactly made his fandom for Marvel comic books and movies a secret, and on June 10, he got to take part in a conversation with actor Anthony Mackie, star of “The Falcon and The Winter Soldier” and the latest actor to take on the role of Captain America, about the importance of Black superheroes and role models.

This is the first of a two-part series about the fatal accident of 1st Lt. David Schmitz, an F-16 pilot at Shaw Air Force Base, South Carolina. Schmitz's tragic death underscores the inherent risks of fighter training. But it also casts a harsh light on the impacts of limited flight hours and insufficient training due to limited available aircraft and the demands of real-life missions. Despite the best efforts of the Air Force and Congress to understand what causes catastrophic aviation mishaps, it's clear that a lot of work remains.

The Pentagon’s leadership is taking steps to promote inclusion in the military, prompting a political backlash.

The Department of Defense announces a new $150 million package for the Ukraine Security Assistance Initiative (USAI) that includes training, equipment, and advisory efforts to help Ukraine’s forces preserve the country’s territorial integrity, secure its borders, and improve interoperability with NATO.

The Defense Department and its partners will hold the next demonstration of the highly anticipated drone swarming concept this fall, said Air Force Lt. Gen. Brian S. Robinson, deputy commander of Air Mobility Command. The next test for the program, known as Gremlins, will occur in the October to November timeframe.

In the Biden administration’s 2022 budget proposal, the Pentagon is requesting $15.3 billion for investments in space technology, an increase of $1.8 billion over what Congress enacted in 2021. “National security space was a clear winner amongst major investment accounts,” consulting firm Avascent wrote in a new report.

What 5G Will Actually Do for the U.S. Military

Marine Corps Lt. Col. Brandon Newell, the director of the Navy’s SoCal Tech Bridge, leads what he calls a 5G living lab. His experimentation, culminating in a demonstration later this month, looked at how 5G cellular connectivity across a base would unlock new uses for self-driving vehicles, greater energy efficiency on base, and even better teaming between drones and ground robots.

The Air Force unveiled new software that it has been developing that it says will optimize flight planning using its internal cloud provider, Cloud One. The software, dubbed Joint Open Mission Systems Core Mission Planning (JOMS CMP), is not billed for full deployment until 2027, but the development team at Hanscom Air Force, Mass., in the interim will work to update the legacy system currently in place.

A wildlife manager with the Space Force’s Space Launch Delta 45 was conducting sea turtle nesting surveys May 19 when she found small, tightly wrapped packages dotting the shore. After testing, it was determined all 24 packages, weighing nearly 65 pounds, had cocaine in them and were seized from the beach, the Space Force said. According to the local sheriff's office, the drugs have an estimated value of approximately $1.2 million.