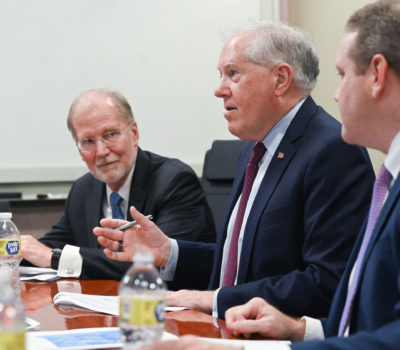 By John A. Tirpak
Air Force Secretary Frank Kendall distilled the top fighting priorities of the Air Force and Space Force into seven “operational imperatives” chiefly as a mechanism to identify the spending transitions needed in the fiscal 2023 budget. But they are likely to persist, and more—on electronic warfare, cyber, and munitions—may be added as the Department of the Air Force continues to scrutinize the capabilities it will need to deter or win a fight with a peer competitor, service leaders said at an industry conference. 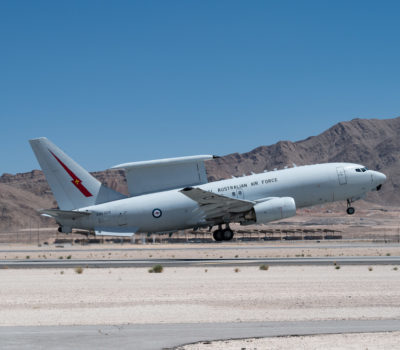 By Greg Hadley
With concerns growing that Congress will once again fail to pass a spending bill in time for the start of the new fiscal year, one Air Force program in particular could suffer—the E-7 Wedgetail. While it’s likely that lawmakers would pass a continuing resolution to keep the Pentagon and the rest of the government open if they don’t meet their Sept. 31 deadline, spending would be frozen at fiscal 2022 levels. That typically prevents new programs from getting underway. 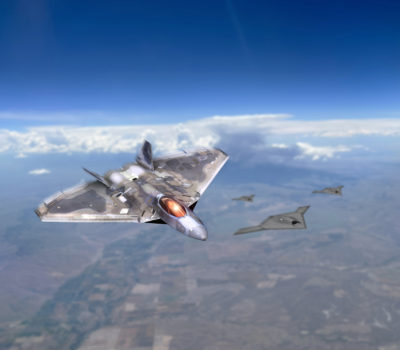 By Greg Hadley
The Air Force’s Adaptive Engine Transition Program is demonstrating and maturing key technologies, but it won’t produce the engine that powers the service’s Next Generation Air Dominance fighter, a key acquisition official said. That engine will come from the lesser-known Next Generation Adaptive Propulsion program, which is still in its preliminary stages, said John Sneden, director of the Air Force Life Cycle Management Center’s propulsion directorate. 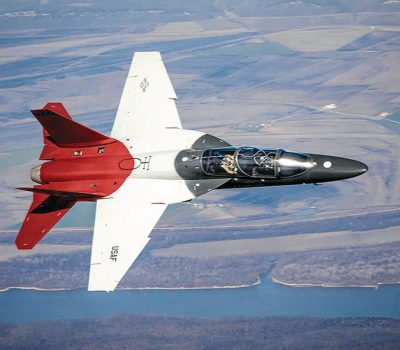 By John A. Tirpak
The era of “three-day critical design reviews” of Air Force programs may be ending with the advent of digital design and development methods, Gen. Duke Z. Richardson, head of Air Force Materiel Command, told attendees at an industry conference. “This is completely transforming how we’re doing systems engineering,” Richardson said of the new technology. Delegating decision-making to “the lowest level” and having a constant, up-to-date digital model or twin of the system that all interested parties can review will likely “end these cataclysmic, three-day critical design review events where I’m at a table with all these drawings—like I’m supposed to notice if there’s [something] missing." 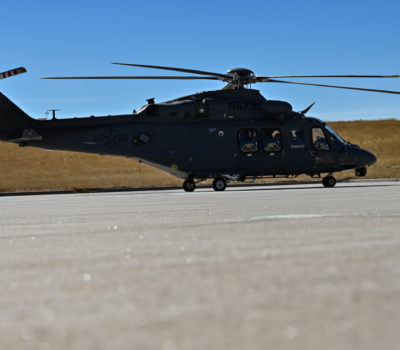 By Greg Hadley
After months of unexpected delays, the Air Force’s MH-139 Grey Wolf is set to enter military utility testing within the coming month, a service program officer said. The Air Force first announced flight testing of the Grey Wolf, intended to patrol the service’s sprawling intercontinental ballistic missile fields, in February 2020, and the service was hoping to declare initial operating capability by 2021.

U.S. Northern Command is wrapping up testing of the Long Range Discrimination Radar for missile defense and expects that it will be operational within “months,” said Brig. Gen. Joseph M. Lestorti. “From the testing so far, we are seeing positive results for what this radar can do for us, discriminating threats to the continental U.S. to make ground-based interceptor engagements more lethal.”

The Pentagon is speaking out against Russia's launch of a spy satellite believed to be shadowing one of its American counterparts closely in the same orbit. The Russian satellite Kosmos 2558 launched Aug. 1 and appears to have been placed in nearly the same orbit as a classified American reconnaissance satellite with a separation of 37 miles. "That's really irresponsible behavior," said Gen. James H. Dickinson, commander of U.S. Space Command, in a report released by NBC News. "We see that it's in a similar orbit to one of our high-value assets for the U.S. government. And so we'll continue like we always do, to continue to update that and track that.”

Pregnant Airmen assigned to Air Mobility Command will now have more information privacy during their pregnancy as part of a new directive by AMC Commander Gen. Mike Minihan. Under the new guidelines, pregnant Airmen will still be able to access prenatal medical care while maintaining health information privacy, a standard that aligns with other medical privacy policies, such as the Health Insurance Portability and Accountability Act.

Fifth B-2 to Touch Down in Australia

A fifth U.S. Air Force B-2 bomber has flown to Base Amberley to train with Royal Australian Air Force F-35s amid tension between China and Taiwan. The UFO-like Spirit can carry nuclear weapons and is thought to be the most expensive aircraft ever made, valued at around $2 billion each.

OPINION: It’s Time to Double Down on Drones for Future Conflicts

“Success in future conflicts requires the U.S. to maintain a large and diverse inventory of combat drones. In a major war with China or Russia, reducing risks to U.S. forces will be essential. Against large, capable forces, the U.S. military risks significant loss of blood and treasure, which, in turn, may lead to mission failure as the adversary’s military assets live to fight another day and American assets dwindle. Drones provide a way to turn the tables: They reduce U.S. costs—measured in both lives and dollars—and impose those costs on the adversary’s most valued targets,” writes Caitlin Lee, senior fellow for the Center for Unmanned and Autonomous Systems at AFA’s Mitchell Institute for Aerospace Studies.

A congressional push to block the Air Force’s plan to retire 33 F-22s could have ripple effects for one of the service’s top priority programs, the Collaborative Combat Aircraft. The Air Force’s proposal to cut the F-22s is part of a broader plan to divest 150 aircraft in fiscal 2023 to free funds for higher priorities such as the B-21 bomber, hypersonic weapons programs, and Next Generation Air Dominance systems.

As part of its military arsenal, Ukraine uses advanced military drones for observation and attack. But the bulk of its drone fleet consists of off-the-shelf or hand-built units adapted in workshops around the country to drop grenades or anti-tank munitions. The soldiers call them “mosquitoes.”

The Air Force implemented new training for aviation psychologists that aims to increase the psychologists’ knowledge of aviation training and practices. One of the many aspects of Air Force aviation psychology is focused on resiliency and readiness of its aircrews’ daily activities by addressing the human factors involved in safe and effective performance. Enhanced understanding of pilot training and the human performance demands on aircrew will facilitate improved ability for these psychologists to accomplish their mission.

The National Guard is shipping doses of Novavax’s newly approved COVID-19 vaccine out to units in hopes that it will help shrink the number of unvaccinated Guard members who face expulsion. About 10 percent of Guard members—around 45,000 Soldiers and Airmen—are not fully inoculated against the coronavirus that has killed more than 1 million people in the United States and nearly 6.5 million worldwide since December 2019.

The Pentagon’s costliest program ever—the $398 billion F-35 Joint Strike Fighter made by Lockheed Martin—has had its share of travails: software snafus, delays, and most recently groundings. But it’s set to be largely insulated from a problem that seems poised to plague other weapons systems: the lack of a new budget for fiscal 2023. The specter of a budget impasse is rising as Congress heads into rancorous midterm elections in November—and coincides with the Pentagon negotiating new contracts for hundreds more F-35 aircraft.

Four al-Shabab terrorists who recently attacked Somali forces were killed Aug. 10 after a series of American airstrikes, U.S. Africa Command announced. U.S. forces, in coordination with the Somali government, launched three airstrikes against the terrorists who attacked the Somali troops near Beledweyne, Somalia. “The command’s initial assessment is that the strikes killed four al-Shabab terrorists and that no civilians were injured or killed,” AFRICOM said. “U.S. forces are authorized to conduct strikes in defense of designated partner forces.”

The U.S. Air Force has deployed 12 F-22 Raptor fighter aircraft to support NATO’s air shielding mission in Poland. The deployed aircraft are from the USAF’s 90th Fighter Squadron based at Joint Base Elmendorf-Richardson, Alaska. On Aug. 5, the F-22 fighter jets arrived at the 32nd Tactical Air Base in Lask, Poland.

Listen to the Surrender Speech of Emperor Hirohito

At noon Aug. 15, 1945, the Japanese people stopped whatever they were doing to listen to a voice almost none of them had ever heard before but that belonged to a man whom they thought about and worked for every day of their lives. For many, it was like listening directly to the voice of God. And he was telling them to surrender. Though Emperor Hirohito of Japan never used the word for “surrender” in this remarkable four-minute, 36-second broadcast, and though he used an archaic form of Japanese that few commoners could clearly understand, it soon became known throughout the empire of Japan that World War II was now over—and that they had unequivocally lost.