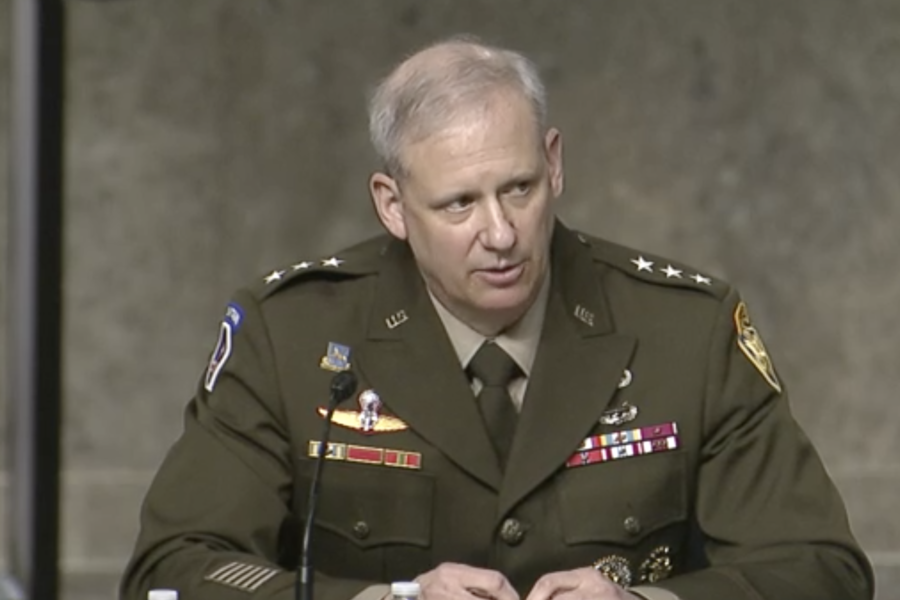 China and Russia are the key adversaries when it comes to developing high-tech weaponry over the next 20 years, but while China’s rate of progress is accelerating, Russia is stymied by multiple factors, the Defense Intelligence Agency told Congress.

DIA Director Lt. Gen. Scott D. Berrier said China will have “basically modernized” its military in just six years and aims to introduce the most “disruptive” military technologies by 2030-2035, according to prepared testimony for the Senate Armed Services Committee provided April 29.

During the next two decades, any of the three main powers—China, Russia, or the U.S.—may steal the lead “in one or more fields and seek to develop military capabilities and concepts to capitalize on perceived advantages,” Berrier said. Any one of the three could come up with new weapons or concepts that “will change the character of warfare.”

But China’s whole-of-government approach—which Berrier called “military-civil-fusion”—intentionally blurs the lines between civilian and military technology efforts, and China’s greater investment in these presents “the greatest threat to U.S. technological superiority.” In fact, Berrier said China has “already achieved peer or near-peer levels in many research areas” and has targeted 57 specific technologies in which to outpace and out-field the U.S. military.

Soon, China will “almost certainly be able to hold U.S. and allied forces at risk at far greater distances from the Chinese mainland,” the DIA said, while it enhances its power projection forces. By 2027, China expects to be able to win a small number of brief but high-level military conflicts—“including the forcible unification of Taiwan”—while deterring, dissuading, or defeating any third-party military intervention. By 2050, China plans to be the dominant world military power.

To underscore China’s advance, the DIA noted that China deployed its new J-20 stealth fighters to the border region with India during recent tensions between the two countries.

China did not slow its military modernization at all as a result of the COVID-19 pandemic, the DIA said.

“China is highly advanced in quantum key distribution and is among the leaders” in artificial intelligence, high-performance computing, quantum information sciences, biotechnology, and advanced robotics. Its lead in this area is both due to indigenous capability as well as “licit and illicit foreign technology acquisition.” This has put it “at the forefront of numerous scientific fields.”

Russia, on the other hand, despite having a “massive” military-industrial complex, has adopted a strategy of targeting military technologies to specifically “match, counter, or offset” perceived advantages in U.S. capability, and those of certain other adversaries, rather than pursue its own pioneering efforts.

Russia can produce “large numbers of weapons” and it is trying to increase its indigenous capabilities in cutting-edge technology, but it is “challenged both organizationally and technically” to develop and make the “high-tech subcomponents required for advanced weapons” because of “severe funding, resource, and infrastructure constraints” on that country’s science and technology sector, Berrier wrote.

Because of these different approaches, China “very likely will present the greatest threat to U.S. technology superiority,” he added. The intelligence community has for three years described China as the “pacing threat” to the U.S. military.

To offset its weakness in broad conventional weapons and computing capabilities, Russia is ever-more-reliant on a profusion of new nuclear weapons for which there is no analogy in the West, such as an undersea weapon capable of creating tsunamis that could destroy broad swaths of coastline. This reliance will continue, DIA estimates.

Intelligence estimates of China’s nuclear capabilities have changed from just six months ago, when it was estimated that China would double its nuclear weapons delivery systems from 200 to 400. Rather, it is accelerating that rate of deployment, the DIA said.

China and Russia both have pressed forward with “advances in space and counterspace capabilities, and [are] using cyberspace to increase their operational reach into U.S. infrastructure,” the DIA said. They are also both taking advantage of the COVID-19 environment “to conduct information warfare to undermine Western governments, attack coalitions, and compel economic and political outcomes in their favor.”