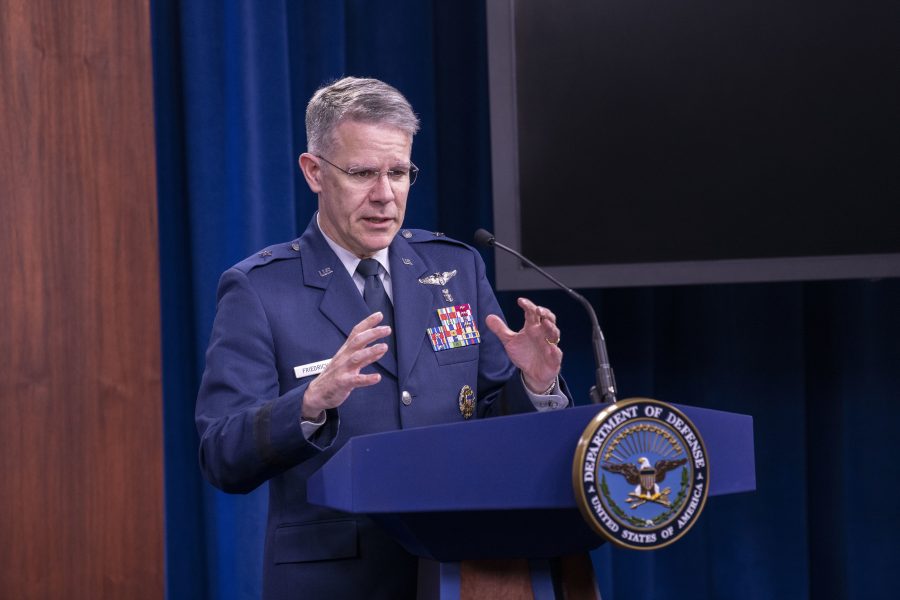 The Pentagon reported having 49 military personnel who have tested positive for the new coronavirus, as well as 19 dependents, 14 civilian employees, and seven contractors, as of 5 a.m. March 18.

Brig. Gen. Paul Friedrichs, the Joint Staff surgeon, said 936 patients have been tested for the virus by Defense Department labs as of March 17. Those who have contracted the coronavirus are not showing more severe symptoms than expected.

The Pentagon has 16 laboratories that are certified to process test kits, and it wants to expand its ability to handle more.

“We’re looking at whether we have the equipment in our labs to perform those tests,” Friedrichs said of new supplies rolling out from health care firms Roche and Thermo Fisher Scientific. “We have one lab that has the Roche equipment, and then all of the labs that are currently performing the coronavirus test can also perform the Thermo Fisher test.”

As DOD begins using its resources to help the country address the global coronavirus pandemic, like flying 500,000 test swabs and medical liquid from Italy to Tennessee for distribution across the U.S., the department is in contact with governors nationwide about which states need more swabs, masks, ventilators, hospital beds, and assistance from two hospital ships.

“The military works well if you tell us what the problem you’re trying to solve is, not the resource you need,” Pentagon spokesman Jonathan Hoffman said.

Vice President Mike Pence said March 18 the U.S. has more than 10,000 ventilators available, and the Pentagon has offered up to 2,000 more as the country worries about a national shortage of supplies to treat the ill. President Donald Trump said he would tap the Defense Production Act to pump out undisclosed numbers of masks and ventilators akin to the mass production of military equipment during World War II.

DOD is also readying two hospital ships, the USNS Mercy and Comfort, to assist states that need to move patients onboard who have not contracted the virus to free up hospital space. The Mercy should be ready to sail from California within days, though officials haven’t decided where it will go, Hoffman said. The Comfort plans to bring its 1,000 beds to New York, but it is undergoing maintenance in Virginia and won’t be available for weeks.

The ships are designed to handle trauma and combat casualties, and will be staffed by military personnel who are equipped to treat surgical and medical cases other than COVID-19, the illness caused by the new coronavirus. Friedrichs said DOD is figuring out where those personnel should come from to balance medical needs nationwide.

The department wants to rely on Active-duty personnel and has not started tapping Reservists because it wants to be sensitive to where those people should be serving their local communities, he added.

While the Pentagon is hesitant to describe the full scope of its deployable medical resources, citing operational concerns, the military is on alert to provide more than 1,000 beds, not counting hospital ships, if needed. A range of field and expeditionary hospitals of varying sizes can also be set up across the country. Those can arrive in a matter of hours or days.

“We are hoping to better understand where there’s demand on the hospital system that exceeds that hospital system’s capacity, and then we’ll work with [the Department of Health and Human Services] … to decide what’s the best capability, if we’re asked to help,” Friedrichs said.

The Army Corps of Engineers is meeting with New York Gov. Andrew Cuomo and his team to see how they might be able to help the state, which has seen more than 2,300 confirmed cases so far, Defense Secretary Mark Esper added.

“We will continue to support the administration’s comprehensive efforts and the country every step of the way while ensuring our nation’s security remains the top priority,” Esper said.

As part of a nearly $46 billion supplemental funding request for fiscal 2020 sent from the Trump administration to Congress on March 17, DOD is asking for $8.3 billion to help stop the virus’s spread among U.S. service members, their dependents, and DOD civilians, minimize its impact on military readiness, and support national response efforts.

“The request includes resources to facilitate changes in service member personnel policy; expedite access to rapid COVID-19 diagnostics; ensure access to medical care, including additional medical countermeasures; address the impacts of the pandemic on logistics and supply chains, including pharmaceuticals and personal protective equipment; and bolster the overall national response,” according to the request. “In addition, this request would provide transfer authority from the Emergency Response Fund to other currently available DOD accounts.”