Skip to content
Staff Sgt. Ross Dugger, a 354th Operations Support Squadron Aircrew Flight Equipment craftsman, zips up the new arctic survival seat kit for the F-35A Lighting II on Eielson Air Force Base, Alaska, on Sept. 25, 2020. All of the items have to be packed tightly and efficiently to save space and fit in the cockpit. Air Force photo by Senior Airman Beaux Hebert.
Expand Photo 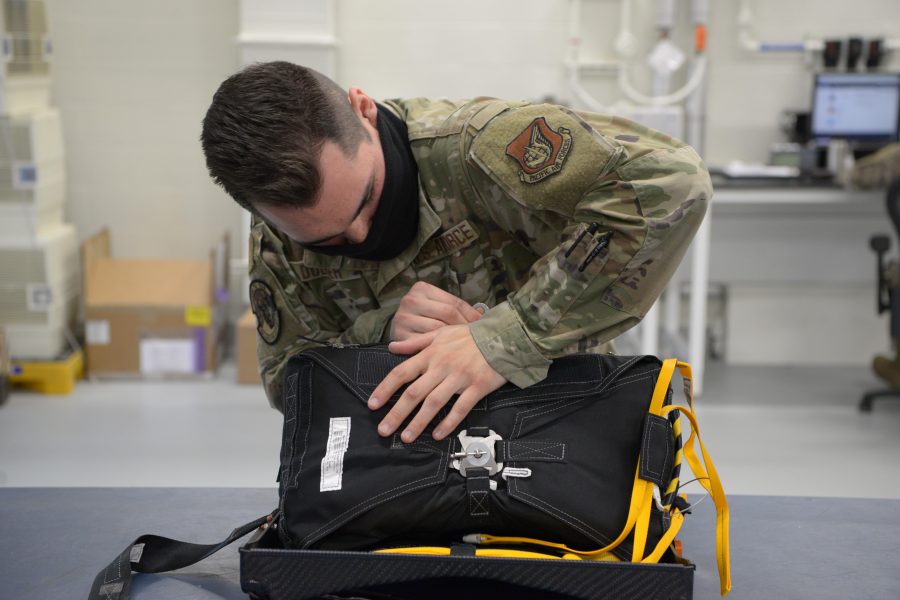 The F-35 was not designed to carry sleeping bags and other equipment to protect pilots if they need to eject into the brutal Arctic temperatures, which regularly dip to -40 degrees Fahrenheit or colder. Alaska-based Airmen had to figure out how to fit roughly 10 pounds of survival gear into a 5-pound sack attached to the F-35’s ejection seat.

After months of research and testing, the 354th Operations Group commander approved the final kit, which includes survival tools such as a knife for gathering food, a poncho to stay dry, and flares to alert rescue crews to a downed pilot’s location.

“Due to the smaller size of the seat, we are limited on how many items we can pack in here,” Staff Sgt. Ross Dugger, a 354th Operations Support Squadron aircrew flight equipment craftsman, said in a release. “Over the years, we’ve worked with [survival, evasion, resistance, and escape specialists] to develop this kit and decided what is the most essential equipment needed to survive.”

Airmen from the 356th Fighter Squadron, the F-35 Program Integration Office, the 66th Training Squadron’s Detachment 1, and the 354th Operations Support Squadron’s aircrew flight equipment team tried out the subzero chamber in November 2019. Once inside, the team timed how long it took to get the gear on and then stayed in the chamber for about five hours to see how the equipment fared in extreme cold.

USAF also shared what it learned with Norway. The Arctic nation also owns the F-35 and is “interested in keying in on our advances,” Anger said.

As maintainers with the 354th Maintenance Squadron perform the complex swap of summer survival kits for the Arctic version, they will also inspect each ejection seat to ensure pilots are safe if they need to escape.

“Hopefully they never have to use these items, but I take a lot of pride in my work, which could potentially save a pilot’s life,” Dugger said.