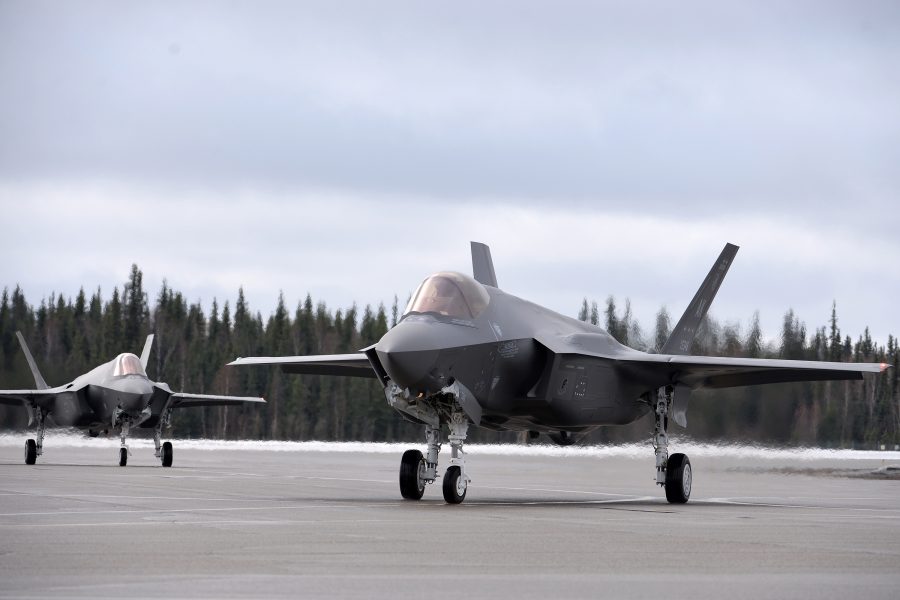 Not even a global pandemic can stop Pacific Air Forces from taking delivery of its first two F-35 strike fighters. The fifth-generation fighters landed at Eielson Air Force, Alaska, on April 21, marking a historic shift for the 354th Fighter Wing, which will now take on a combat mission in addition to its role training U.S. and partner forces through major exercises like Red Flag-Alaska.

“They are on their way and we are ecstatic,” 354th Fighter Wing Commander Col. Ben Bishop said shortly after the jets departed Lockheed Martin’s Fort Worth, Texas, facility. “Moving forward we’ll be charged with projecting airpower from the top of the globe. It’s significant growth for the 354th Fighter Wing, and also for the Eielson community.”

The wing planned to live-stream the arrival rather than hold a formal arrival ceremony because of the COVID-19 pandemic, but Bishop said the coronavirus is not expected to impact the beddown schedule. A third F-35 is set to arrive this month, with follow-on aircraft filling out two squadrons and expanding Eielson’s fleet from 30 aircraft to 84 by the end of 2021. The base also hosts nine KC-135 Stratotankers from the Alaska Air National Guard and 21 F-16 Fighting Falcons—one of USAF’s two organic Aggressor squadrons.

“Once the beddown is complete, with 54 aircraft, the state of Alaska will have the highest concentration of combat-coded fifth-generation aircraft anywhere in the Department of Defense,” Bishop said. In addition to Eielson’s F-35s, two F-22 squadrons are based at nearby Joint Base Elmendorf-Richardson, Alaska.

As far back as 1935, USAF Gen. Billy Mitchell spoke of the strategic importance of Alaska, telling Congress, “Whoever holds Alaska will hold the world.”

With tanker support, Eielson is just one fighter sortie from any target in both the Indo-Pacom and European theaters, Bishop said. Eielson’s Airmen also have operational experience over the Arctic, a region of increasingly important strategic interest as the Polar Icecap melts and the region becomes accessible to more nations.

“This is a contested environment and the weather can be very challenging,” Bishop said. “We have a team here at Eielson that’s used to this environment, and bringing the F-35 here is an opportunity to project power from this strategic location.”

The F-35 was not designed to carry sleeping bags or other equipment needed to protect pilots if they ever need to eject in -40 temperatures, which are common in the Arctic region. Bishop said the wing is working to ensure Arctic survival kits are ready for the winter flying season.

By the end of 2021, the number of Airmen at Eielson is expected to nearly double, from about 1750 in 2019 to 3,250. The wing has eight qualified F-35 pilots now and more than 90 maintainers, enough to accept delivery of the first aircraft. Growth plans are stymied by the Defense Department’s stop movement order, however.

“We do have the ability to grant waivers as needed, and we’re looking at that closely to make sure we are taking the appropriate precautions to mitigate the spread of the coronavirus and still allow us to do our mission-essential tasks,” Bishop said.

To accommodate all those new Airmen, the Air Force is investing $500 million in dozens of building projects at Eielson, including new hangars, an F-35 flight simulator, munitions storage, and a new school. Of 41 military construction projects associated with the F-35 beddown, 28 are complete.

“What’s unique about Eielson is that we haven’t deactivated anything” while preparing to take on all those new fighters, Bishop said. “This is all additive.”

Editor’s Note: This story was updated at 10:30 a.m. on April 22 to include the correct number of maintainers assigned to the wing and the number of Airmen who will be assigned once the F-35 beddown is complete.