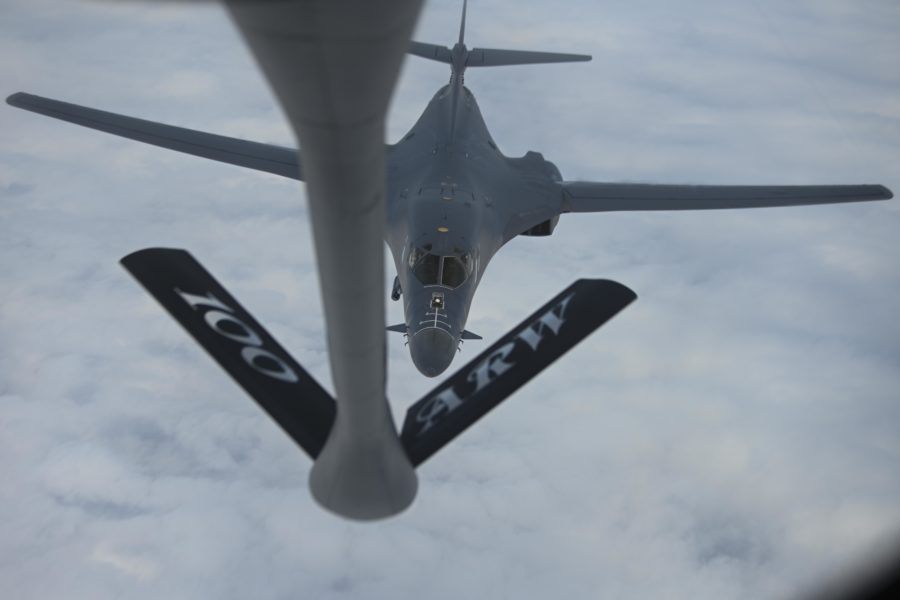 Two B-1B Lancers returned to Europe for a bomber task force flight on April 7, shortly after USAF bombers returned home from the continent after a deployment.

The Lancers from Ellsworth Air Force Base, S.D., flew directly to the Aegean Sea and returned home in a 12,000 nautical mile round-trip flight. During the mission, F-16s from Aviano Air Base, Italy, escorted the bombers before flying over the Aegean Sea, according to a U.S. Air Forces in Europe release. Photographs show the B-1s linking up with KC-135s from RAF Mildenhall, England, during the mission.

“U.S. security commitments to the NATO alliance remain ironclad,” said Maj. Gen. Lance Landrum, U.S. European Command director of operations, in a release. “Today’s Bomber Task Force mission is another in a long list of examples of how America’s military forces sustain readiness, improve interoperability, and demonstrate our nation’s ability to deliver on commitments from across the Atlantic.”

The flight comes about two weeks after B-1s from Dyess Air Force Base, Texas, completed a Bomber Task Force deployment to Norway—a first for the bomber. During the deployment, the bombers flew with 11 allies and partner nations in Europe and the Arctic, landed in Poland for the first time, and conducted the first hot-pit and warm-pit refuels in the theater, according to a Dyess release. At the same time, B-2s from Whiteman Air Force Base, Mo., deployed to Lajes Field, Portugal, as part of the USAFE bomber task force.