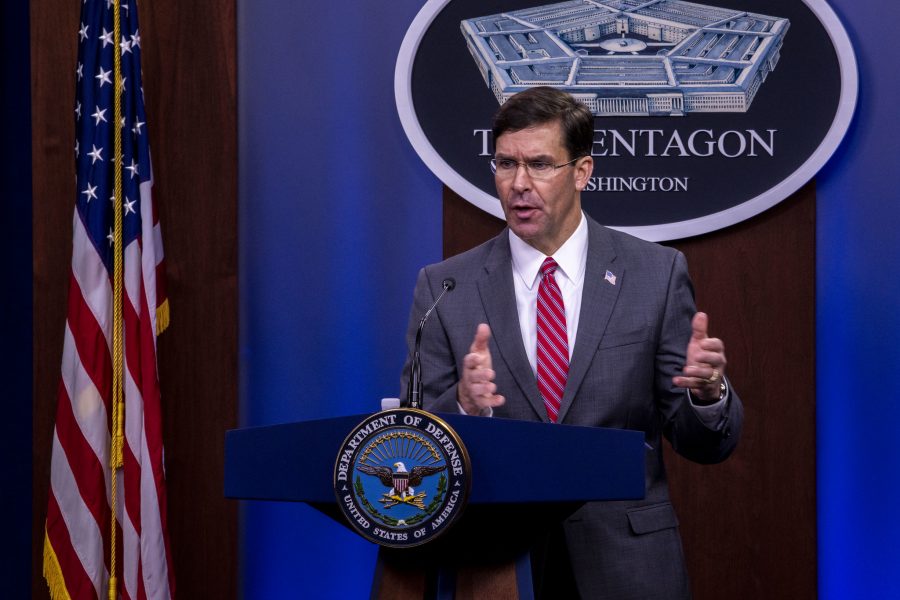 Defense Secretary Mark Esper on June 3 abruptly reversed a plan made earlier in the day to send home a portion of the Active-duty troops called to Washington to quell civil unrest in the National Capital Region, following a meeting at the White House.

The Defense Department has deployed 1,600 Active-duty Soldiers from the 16th Military Police Brigade and the 91st Military Police Battalion to D.C., flown in by several USAF mobility aircraft. The Associated Press reported the Army was told earlier on June 3 to send 200 troops home, but the plan was canceled hours later.

“It is our intent at this point not to bring in Active forces, we don’t think we need them at this point,” Army Secretary Ryan McCarthy told The Associated Press. “But it’s prudent to have the reserve capability in the queue, on a short string.”

During an early morning press conference, Esper told reporters Active-duty forces must be called on “only in the most dire situation,” and he said the Insurrection Act, the federal law that allows the Commander in Chief to deploy military troops within the U.S. in case of uprisings, should not be used.

In addition to the Active-duty troops on standby, there are about 30,000 Guardsmen in 31 states and D.C. deployed to assist law enforcement. President Donald Trump said June 1 he will send in Active-duty forces if governors do not sufficiently call up the National Guard “and quickly solve the problem for them.”

Esper also was at the White House on June 1 when local police, supported by the National Guard, forcefully cleared Lafayette Square across the street of protesters so Trump could visit St. John’s Cathedral, which had been damaged the night before. Esper said he did know about the photo op, and he expected to see damage and visit with National Guard forces in the area. The decision to clear the square, he said, came from the Department of Justice, and Esper was not briefed on the plan nor did he expect to be since it was not a Defense Department operation.

Esper said he does “everything I can to stay apolitical, and to stay out of situations that appear political. Sometimes I’m successful, sometimes I’m not.”

Hours after the photo op at St. Johns on June 1, D.C. Army National Guard UH-72 Lakota medical evacuation helicopters flew extremely low over over protestors in Washington. Video of the helicopters, with Red Cross insignia, showed them hitting crowds with rotor wash in the streets. Esper said he was not aware until the next day that they were Army Guard helicopters, but once he found out, he ordered McCarthy to investigate how it happened. The Washington D.C. National Guard also has ordered an investigation.

This week, senior military officials have been publishing letters to service members and the general public about the state of race relations in the country, and within the ranks. Air Force leaders were among the first, with Chief Master Sergeant of the Air Force Kaleth Wright publishing a lengthy personal essay on his views and Chief of Staff Gen. David Goldfein, Chief of Space Operations Gen. Jay Raymond, and Space Force Senior Enlisted Adviser Chief Master Sgt. Roger Towberman following suit.

Esper released his own letter late on June 2, and said during the press conference that the killing of George Floyd, a black man, by a white Minneapolis police officer “is a horrible crime” and “a tragedy that we have seen repeat itself too many times.” Chairman of the Joint Chiefs of Staff Gen. Mark Milley also released a letter to military leaders that included a hand-written note saying, “We all committed our lives to the idea that is America—we will stay true to that oath and the American people.”

USAF Gen. Joseph Lengyel, chief of the National Guard Bureau, in a June 3 letter said he was “sickened by the death of George Floyd,” and “horrified his six-year-old daughter will grow up without a father.” He acknowledged the “anger and outrage” that is “spilling out into the streets all across America.”

“We all bear the scars of history, of oppressors and the oppressed. We cannot erase this legacy, but we can listen, we can learn, and we can be better. We must be better,” Lengyel wrote. “Everyone who wears the uniform of our country takes an oath to uphold the Constitution and everything for which it stands. If we are to fulfill our obligation as service members, as Americans, and as decent human beings, we have to take our oath seriously. We cannot tolerate racism, discrimination, or casual violence. We cannot abide divisiveness and hate. We cannot stand by and watch.”

The rollout of some of the public statements came slowly, with service officials waiting for Esper to lead and set the tone. Esper said he wanted to make the initial message as the situation escalated nationally, but several high-ranking former defense officials have offered scathing rebukes of Esper’s leadership since the riots erupted for allowing the military to be used as political pawns.

“We must reject any thinking of our cities as ‘battlespace’ that our uniformed military is called upon to ‘dominate,’” former Defense Secretary Jim Mattis told The Atlantic. “At home, we should use our military only when requested to do so, on very rare occasions, by state governors. Militarizing our response, as we witnessed in Washington, D.C., sets up a conflict—a false conflict—between the military and civilian society. It erodes the moral ground that ensures a trusted bond between men and women in uniform and the society they are sworn to protect, and of which they themselves are a part.”

Mattis, who resigned in 2018 over a policy disagreement with the administration, said local governments are best equipped to keep public order, and he denounced the President for putting troops in a precarious situation.

“When I joined the military, some 50 years ago,” he writes, “I swore an oath to support and defend the Constitution. Never did I dream that troops taking that same oath would be ordered under any circumstance to violate the Constitutional rights of their fellow citizens—much less to provide a bizarre photo op for the elected Commander-in-Chief, with military leadership standing alongside.”

Retired Adm. Mike Mullen, former Chairman of the Joint Chiefs of Staff, wrote in a piece that also appeared in The Atlantic that it “sickened” him to see the National Guard participate in efforts to “forcibly and violently clear a path through Lafayette Square to accommodate the President’s visit outside St. John’s Church.”

“As a white man, I cannot claim perfect understanding of the fear and anger that African Americans feel today. But as someone who has been around for a while, I know enough—and I’ve seen enough—to understand that those feelings are real and they are all too painfully founded,” wrote Mullen, who said Americans must “support and defend” the right to “peacefully assemble and to be heard … And neither of these pursuits will be made easier or safer by an overly aggressive use of our military, Active duty or National Guard. The United States has a long and, to be fair, sometimes troubled history of using the armed forces to enforce domestic laws. The issue for us today is not whether this authority exists, but whether it will be wisely administered.”

Editor’s note: This story was updated on June 3 to include updated information from the Pentagon as well as comments from the National Guard Bureau Chief and former defense officials.