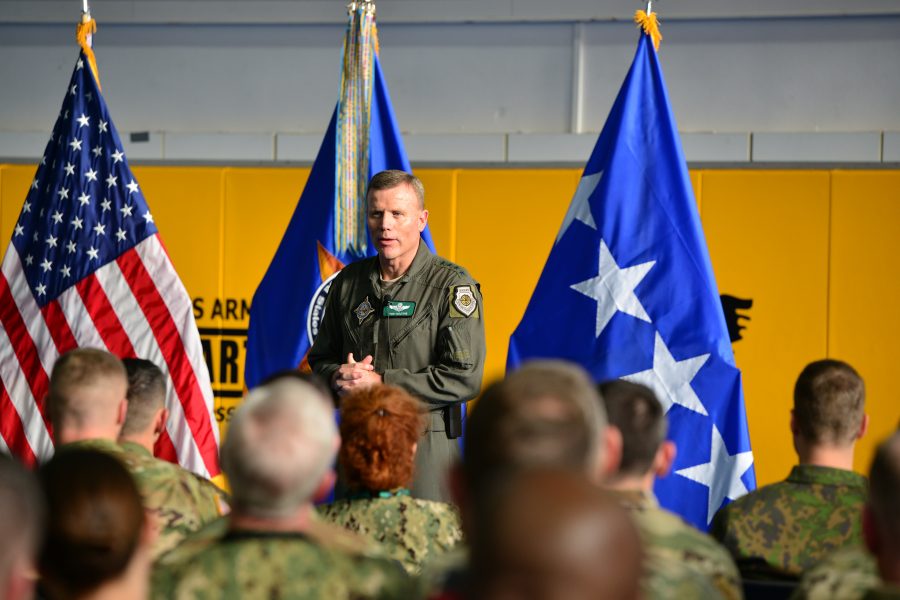 U.S. European Command has about 2,600 personnel in self-isolation and has curtailed its exercises because of the ongoing new coronavirus outbreak, but the head of the military in Europe says readiness will remain high for the foreseeable future.

USAF Gen. Tod Wolters, EUCOM boss and NATO Supreme Allied Commander-Europe, said March 20 that his command has watched the coronavirus outbreak spread throughout the continent for months now and is evolving its tactics, techniques, and procedures to try to counter the spread.

“This is serious, serious business and for months we have embraced precautionary measures to safeguard the health of not only our personnel but also of our communities and the mission,” Wolters told reporters via teleconference.

As of March 20, there are 35 U.S. service members on the European continent who have tested positive for COVID-19, the disease caused by the new coronavirus.

The command is preparing for the possible “worst case scenario” as the virus spreads, which Wolters said is a situation where EUCOM could not function independently and would need to “seek assistance from other U.S. forces outside the AOR,” he said.

“We don’t forecast that to occur, but conditions in the environment will dictate that in the future,” he said.

For now, the command has cut back on some exercises. For example, Wolters said the EUCOM has only accomplished about 40 percent of the large-scale ground-focused Defender Europe 2020 exercise. In the coming months, the command will likely reduce its exercises between 30 and 65 percent, depending on the scale of the outbreak, Wolters said.

The command is following the recommended steps to prevent the spread, including screening and social distancing, and will “do everything we can to ensure our readiness is sky high,” Wolters said.

The U.S. military has been able to work closely with NATO and other partners on the continent to share best practices as well as supplies when possible. On March 19, a USAF C-17 flew the second load of 500,000 swabs from Italy to Tennessee. The swabs are a key ingredient of COVID-19 test kits and have been in short supply. Combined with the first flight on March 16, that makes 1 million swabs that have been delivered from Aviano Air Base to the Department of Health and Human Services.