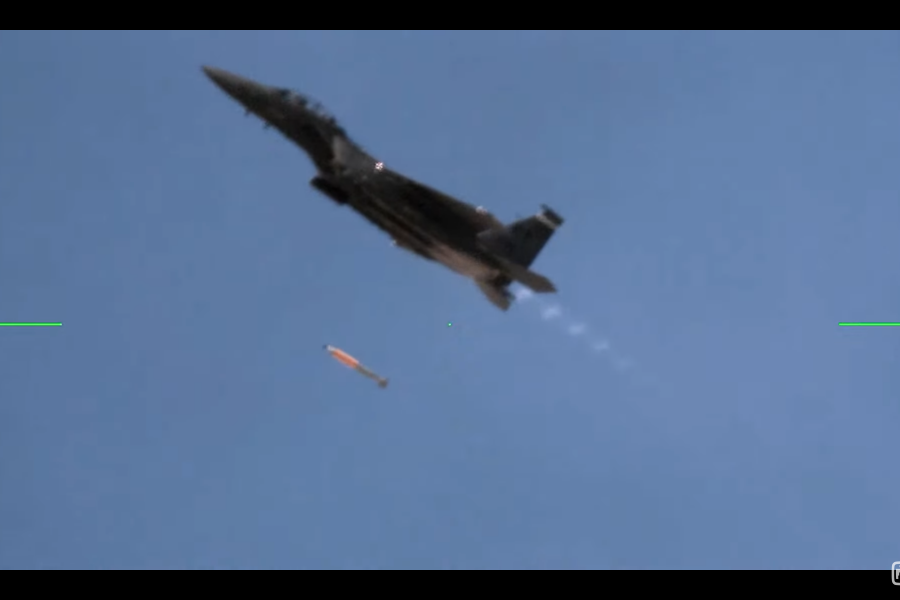 The F-15E Strike Eagle is the first Air Force aircraft to prove it is compatible with the refurbished B61-12 nuclear gravity bomb, Sandia National Laboratories announced on June 8.

A Strike Eagle took off from Nellis Air Force Base, Nev., and dropped a mock B61-12 from 25,000 feet in March, hitting the desert floor at Sandia National Laboratories’ Tonopah Test Range 55 seconds later. Officials also conducted a lower-altitude flight test at Tonopah, 160 miles from Nellis. The jet released a mock weapon while flying “nearly at the speed of sound” at about 1,000 feet. The flights marked the last of six flight tests and wrapped up demonstrations with the full weapon system.

“We were able to test the B61-12 through all operational phases and we have extremely high confidence the B61-12 is compatible with the F-15E Strike Eagle,” said Steven Samuels, a manager on the bomb program’s team at Sandia. “The results speak for themselves, the tests met all requirements, both in performance and safety. It was delivered with precision accuracy; it worked, and it worked well.”

Sandia does the design and engineering work on all non-nuclear components of the nation’s nuclear stockpile, including the refurbished B61, and is in charge of integrating the complete weapon, according to the release.

The B61 entered service five decades ago and has gone through numerous modifications. The B61-12 consolidates and replaces four legacy bomb variants into one weapon. The 12-foot, 825-pound bomb is designed to be delivered from the air in either ballistic or guided-gravity drop modes using a Boeing-built tailkit, according to the release.

Development for the redone B61-12 began in 2012, and is aimed at improving the safety, security, and reliability of the Air Force’s legacy air-dropped tactical nuclear weapon. USAF manages the tailkit’s development. The National Nuclear Security Administration had planned to manufacture the first refurbished warhead in 2020, but that has since been bumped to fiscal 2022.

The life-extension program is slated to cost $8.3 billion, and a top NNSA official said in September refurbishment delays could add $600 million to $700 million to that price tag. The Air Force’s guidance tailkit is projected to cost more than $1 billion as well.

In addition to the F-15E, the bomb also will be certified to fly on the B-2 strategic bomber, F-16C/D fighter, and eventually the F-35 Joint Strike Fighter.