Skip to content
Video released by the Pentagon show the aftermath of U.S. airstrikes along the Syria-Iraq border on June 27. Screenshot
Expand Photo 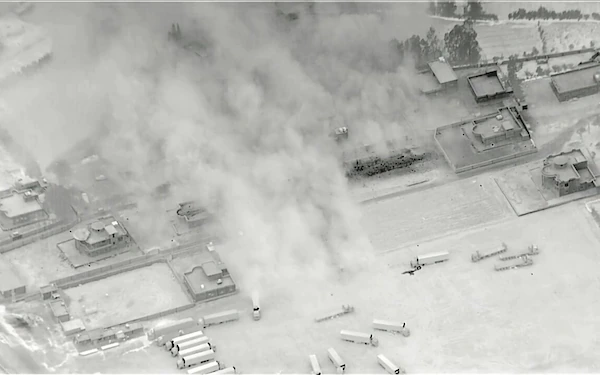 U.S. Air Force F-15E and F-16 aircraft on June 27 conducted strikes on three facilities on the Syria-Iraq border, where the Pentagon said Iranian-backed militias were building and storing the small drone weapons used to attack U.S. and partner bases in recent months.

The strikes hit buildings in As-Sisak, Al Hury, and Qasabat in Syria, with video released June 28 showing the buildings in rural areas destroyed by airstrikes. The buildings are linked to militias such as Kata’ib Hezbollah and Kata’ib Sayyid al-Shuhada, the Pentagon said in a statement.

“As demonstrated by this evening’s strikes, President Biden has been clear that he will act to protect U.S. personnel. Given the ongoing series of attacks by Iran-backed groups targeting U.S. interests in Iraq, the President directed further military action to disrupt and deter such attacks,” Pentagon spokesman John F. Kirby said in a statement.

The strikes were “necessary to address the threat and appropriately limited in scope,” Kirby said. The Syrian Observatory for Human Rights reported that seven members of a militia were killed, with more sustaining serious injuries.

The Iraqi government criticized the strikes, with Ministry of Defense spokesman Yehia Rasool saying it was a “blatant and unacceptable violation of Iraqi sovereignty.”

At about 7:45 local time on June 28, U.S. forces inside Syria were attacked by an undisclosed group firing multiple rockets. No one was injured and damage from the attack is still being assessed, Operation Inherent Resolve spokesman Col. Wayne Marotto said. U.S. forces in response fired counter-battery artillery fire at the rocket launching positions, he said.

The strikes come amid discussion on Capitol Hill on the existing Authorizations on the Use of Military Force, and whether the measures should be repealed and replaced to govern military action in the Middle East.

Sen. Bob Menendez (D-N.J.), chairman of the Senate Foreign Relations Committee, said the strikes showed “decisive action” to protect U.S. personnel and interests, and his committee will investigate the strikes and a “broader discussion” on the 2002 Authorization on the Use of Military Force as it relates to combatting Iranian-backed militia groups.

Some lawmakers raised concern that the repeated retaliatory strikes, conducted without Congressional notification, would now qualify as a “pattern of hostilities” under the War Powers Act.

“Both the Constitution and the War Powers Act require the President to come to Congress for a war declaration under these circumstances,” Sen. Chris Murphy (D-Conn.), the chairman of the U.S. Senate Foreign Relations Subcommittee on Near East, South Asia, and Counterterrorism, said in a statement.

Sen. Jim Inhofe (R-Okla.), ranking member of the Senate Armed Services Committee, said in a statement that “Iran’s persistent attacks on American personnel via its proxies cannot be tolerated.” The threat shows the continued need for the AUMF, or “at a minimum” the need for a comprehensive replacement.

President Joe Biden, speaking during a brief appearance at the Oval Office, said the Iranian-backed groups were responsible for attacking U.S. personnel and “I have that authority under Article II [of the Constitution] and even those up on the Hill who are reluctant to acknowledge that have acknowledged that that’s the case.”

It is the second time in about four months that Biden has approved airstrikes on the militias in the region. On Feb. 25, two F-15Es dropped seven precision-guided munitions on a border crossing complex used by the two militias to bring fighters and weapons into Iraq.

“These small- and medium-sized UAS proliferating across the [area of operations] present a new and complex threat to our forces and those of our partners and allies,” he said. “For the first time since the Korean War, we are operating without complete air superiority.”

In recent months, there have been several such attacks on U.S. positions in locations such as Erbil in Iraqi Kurdistan and al-Asad Air Base.

Editor’s Note: This story was updated at 6:44 p.m. on June 28 to include Congressional reaction.