Skip to content
An F-15E Strike Eagle assigned to the 335th Expeditionary Fighter Squadron prepares to depart at Al Dhafra Air Base, United Arab Emirates, on Feb. 18, 2021. An array of avionics and electronics systems gives the Strike Eagle the capability to fight at low altitude, day or night and in different climates Air Force photo by Staff Sgt. Miranda A. Loera.
Expand Photo 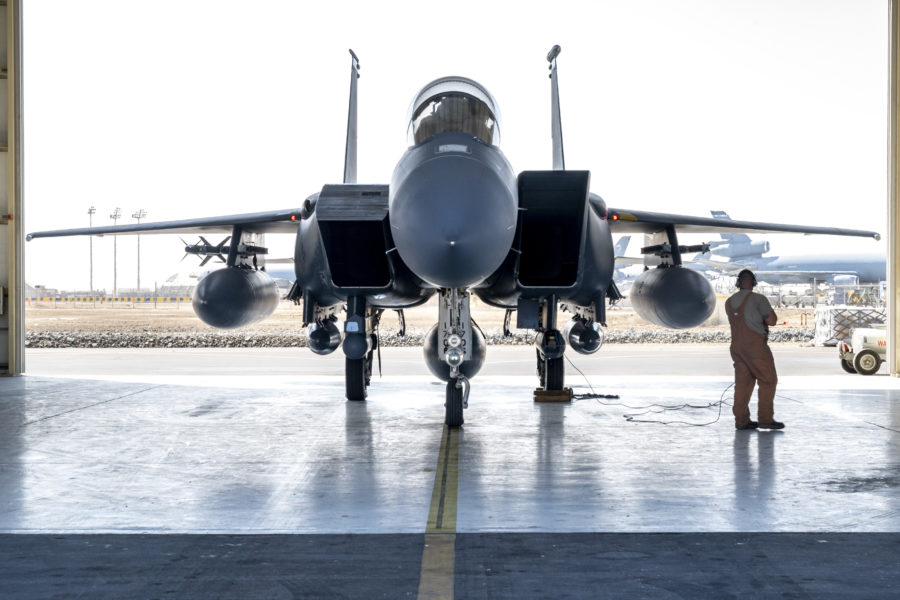 Two USAF F-15E Strike Eagles conducted the Feb. 25 strike on infrastructure used by Iranian-linked militias in Syria, dropping seven precision-guided munitions on a border crossing complex in a move designed to send a message in the region, the Pentagon said.

The F-15E strike destroyed nine facilities near the Abu Kamal border crossing with Iraq and damaged two more in the complex, Defense Department spokesman John Kirby told reporters Feb. 26. The complex is an “entry control point” that the militias, Kait’ib Hezbollah and Kait’ib Sayyid al-Shuhada, used to bring weapons and fighters into Iraq.

President Joe Biden ordered the strike the morning of Feb. 25 as a way to retaliate for the Feb. 16 rocket attacks on a U.S. operating location and other targets near the Erbil International Airport in Iraqi Kurdistan, which killed one non-American contractor and injured a U.S. service member and multiple other contractors. It was the first such strike Biden has ordered as President, Kirby said. The strike is justified legally through both Article II of the U.S. Constitution and Article 51 of the United Nations that outlines the right of self defense, he said.

U.S. forces depended on Iraqi and Kurdish investigations into the attack and other intelligence to develop the targets, he said. That local intelligence “certainly was of significant assistance” in putting together strike options.

However, Iraqi forces did not take part in the strike, and it was completely in Syrian territory. The U.S. military notified Russia in advance of the attack through the deconfliction phone line. As of the afternoon of Feb. 26, the battle damage assessment was ongoing and there were “preliminary indications of casualties on site,” but no specific numbers, Kirby said. The Syrian Observatory for Human Rights claims 22 militia members were killed in the strikes.