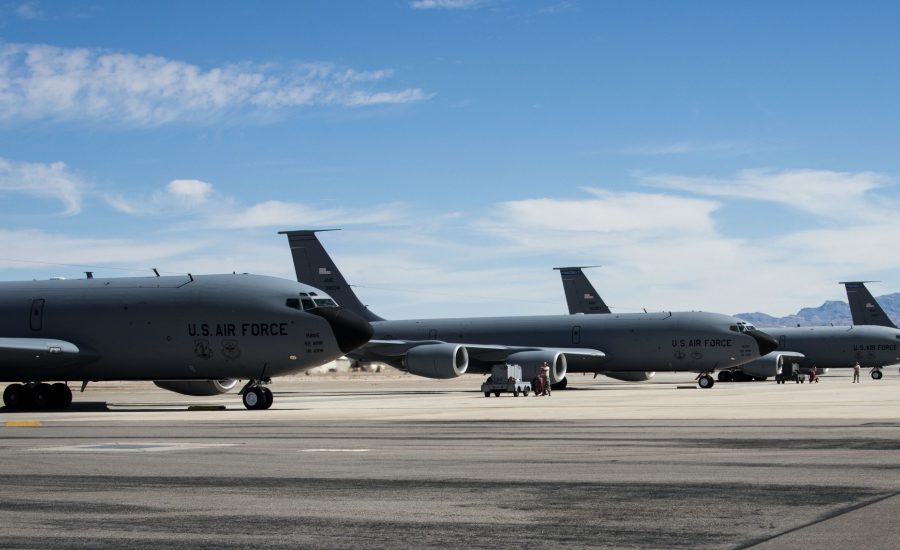 FAIRCHILD AIR FORCE BASE, Wash. — For a barometer of the military’s unrelenting thirst for aerial refueling, look to the sprawling flight line here in the Inland Northwest.

Fairchild is the home of the Air Force’s only “super” tanker wing, with four KC-135 squadrons. The fourth, the 97th Air Refueling Squadron, which activated in 2019, reached initial operational capability in October 2020 then quickly deployed.

The base’s 92nd Refueling Wing is unique among the Air Force in that it always has a squadron deployed downrange. The base has the most resources—63 total aircraft in its inventory—meaning it is often the Air Force’s first call when refueling is needed.

“We get the call more than anybody else, and part of that reason is because we have more resources,” 92nd ARW Commander Col. Cassius T. Bentley III said in an interview. “But also I think it’s because we have better Airmen.”

The Air Force’s mobility fleet is undergoing massive change as it brings on the new KC-46 Pegasus. While the KC-46 will not be operationally capable until about 2024, the service needs to free up personnel and ramp space to get ready for the new tanker.

This has meant force structure changes.

With McConnell Air Force Base, Kan., shifting to becoming Air Mobility Command’s main KC-46 operating base, the service needed a home for additional KC-135s and Airmen, so it looked to Fairchild.

The addition of the squadron made Fairchild the world’s largest tanker wing “by a lot,” Bentley said. If Fairchild became its own country, it would have the world’s second-largest refueling fleet behind the rest of the U.S. Air Force and ahead of both China’s and Russia’s fleets.

“[The requirement] goes up as we have more tails and more aircrews who can execute more missions,” Bentley said. This has made Fairchild the “911 call for the Air Force,” he said.

Fairchild likely flew more in 2020 than it has before, including short-notice calls to help with the withdrawal of troops from Somalia—called Operation Octave Quartz. The team got the call Christmas morning to head out for the mission. “The team is always ready, and they were the first ones to show up,” Bentley said.

When the 97th ARS deployed in late 2020 after reaching full operational capability, it replaced Fairchild’s 93rd ARS downrange. That squadron was deployed as the COVID-19 pandemic spread, extending their time in the region and making their deployment the longest ever for a KC-135 unit. That same squadron just redeployed, landing at Incirlik Air Base, Turkey, in mid-July.

The squadrons deploy on four-month rotations, soon to shift to six months, as part of a new mobility force generation model that uses one squadron to meet a deployment request as opposed to sending smaller groups of Airmen and aircraft from multiple units.

In addition to always having a squadron deployed for combat operations, Fairchild tankers sit on nuclear alert missions and on standby for homeland defense missions, supporting coronet fighter deployments, refueling bomber task force deployments, and refueling USAF and other service training missions such as Red Flags, among others duties.

Crews not deployed have been working on USAF initiatives such as agile combat employment and joint all-domain command and control, Bentley said.

Fairchild is focusing on developing a hot-pit refueling capability. Wing aircrews have been practicing every Thursday since March, and the 93rd ARS recently deployed with 100 percent of its crews trained on hot-pit refueling. Across the wing, 70 percent of crews are currently trained.

Fairchild’s KC-135s are looking at additional ways to contribute to a fight, including more command and control capability. This is taking shape with the planned installation of 42 Real-Time Information in the Cockpit systems, which use the Link 16 data link to improve its situational awareness. These modifications begin in August.

The wing is using its location and number of aircraft to train for the Air Force’s agile combat employment both at home and forward, austere locations. Recently, Fairchild KC-135s and aircrews deployed to far-off places such as Wake Island in the western Pacific, the type of location that would be important in a near-peer battle in the Indo-Pacific. Fairchild crews fly these sorts of missions once or twice per month and sometimes deliver cargo as well.

“We’re trying to change the narrative of the 135s,” Bentley said. “Because a lot of the time you think, ‘Hey, they take off, they offload gas, they come back to their home station.’ We’re changing the narrative, and we’re really moving out on this agile combat employment. … The tanker can do more than just give gas. It’s their primary mission, but there’s more we can do.”