Skip to content
Airmen recite the oath of office before transferring into the U.S. Space Force during a ceremony at the Pentagon, Arlington, Va., Sept. 15, 2020. About 300 airmen at bases worldwide, including 22 in the audience, transferred during the ceremony. U.S. Air Force photo by Eric Dietrich
Expand Photo 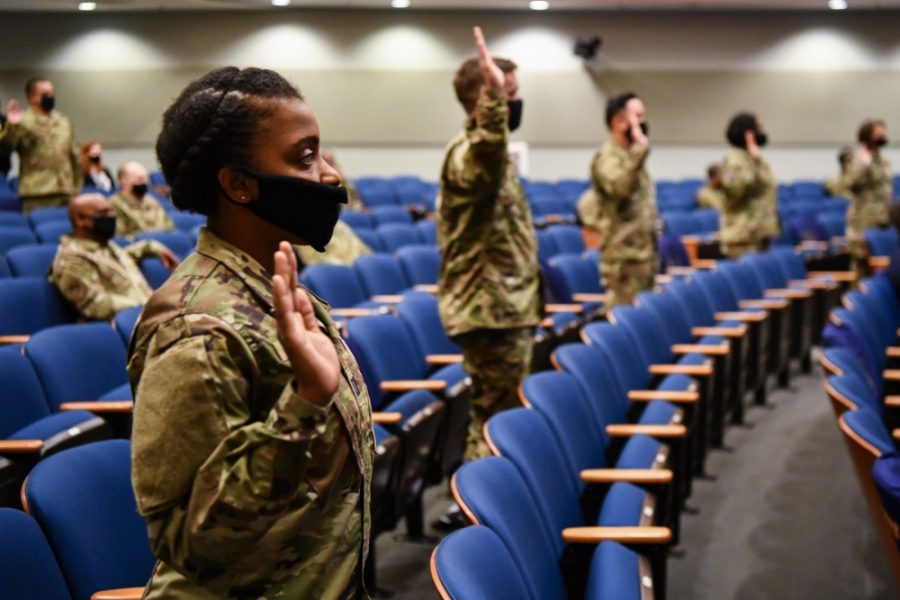 Space Force Selects First 50 Officers to Transfer from Other Services

Out of a pool of more than 3,700 applicants, the first 50 Active-duty Army, Navy, and Marine Corps volunteers were announced for transfer to the Space Force beginning in July. A second tranche of 350 transfers will be announced in July to match Space Force specialties including space operations, intelligence, cyber, engineering, and acquisition.

“We are overwhelmed by the number of applicants, and the outpouring of support our sister services have provided as we’ve partnered together to design the Space Force,” said Gen. David D. Thompson, vice chief of space operations, in a June 30 press statement.

The total manpower of the Space Force is roughly 12,000 Guardians, with some 6,000 civilians and 5,500 military as of June 15. An undisclosed number of Air Force Airmen also continue to support the Space Force in an administrative assignment capacity.

A Space Force spokesperson told Air Force Magazine June 30 that the force is onboarding the first 50 transfers from other services in fiscal 2021, which ends Sept. 30. The July announcement of 350 more transfers will be onboarded in the 2022 fiscal year.

New Guardians will join the force on a staggered approach according to their own individual schedules rather than a single transfer ceremony.

“When we will get to 16,000 depends on a lot of future transfers,” the spokesperson said of the number of Guardians Gen. John W. “Jay” Raymond has said will encompass a “lean” new fighting force.

“It’s being worked and more information will be released in the coming months,” the spokesperson said.