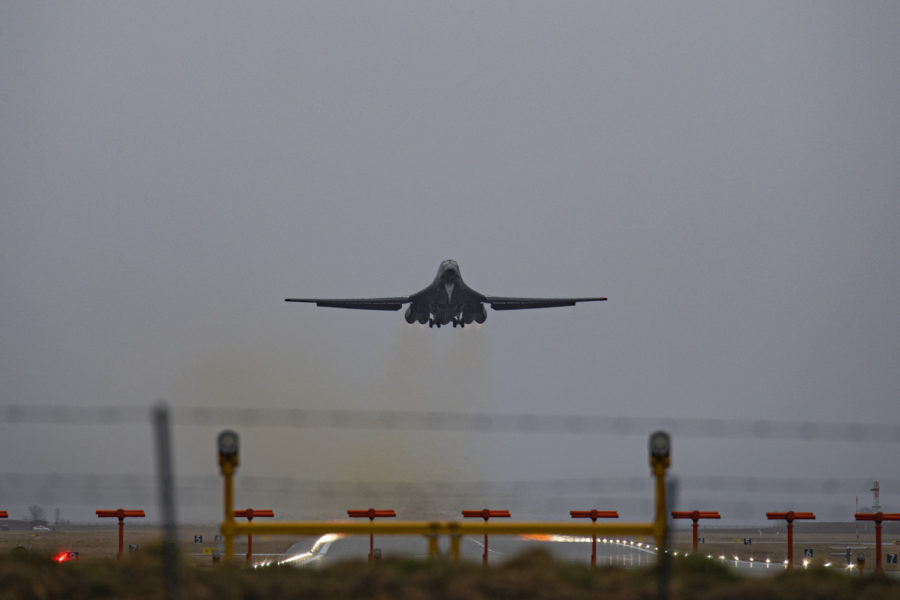 The first-ever basing of B-1B Lancers in Norway is giving aircrews and maintainers Arctic experience, which is becoming more important as the U.S. military looks north.

The B-1s from Dyess Air Force Base, Texas, deployed to Orland Air Base for joint training with Norway and other regional partners in the Arctic. While Lancers have integrated with Norwegian aircraft, it is the first time the bombers are based out of the country.

USAFE Deputy Commander Lt. Gen. Steven L. Basham told reporters in a teleconference March 5 the bomber task force deployment is an important opportunity for the crews to operate out of a new, frigid location. USAF bombers have routinely deployed to other locations in Europe, largely RAF Fairford in the United Kingdom, but flying out of the different location brings new challenges.

“While flying out of the U.K. is great, if we don’t expand our horizon and look for other opportunities to work with other allies, other partners, then we miss true training opportunities to continue to develop ourselves and, even more so I would say, to learn from others,” Basham said.

The deployment is the first time the U.S. is generating flights with Norwegian partners and working with the command and control and air restrictions in the country.

On March 3, two B-1s flew a training mission in the North and Baltic Seas, integrating with fighter aircraft from Denmark, Poland, Germany, and Italy. The Lancers also flew over Latvia, Lithuania, and Estonia.

Throughout the deployment, the bombers will fly further into the Arctic, and conduct bombing training with Norwegian ground forces.

The deployment is a test more so for the crews than the aircraft. B-1s, which are also based at Ellsworth Air Force Base, S.D., have already proven to be adept at operating in the cold.

“The aircraft doesn’t mind, it’s our great aviators and maintainers and support personnel who might not be as familiar with the rigors of the cold,” Basham said. “Our Norwegian partners are helping us along in that, but I would offer that the aircraft has performed exceptionally well, and we’ve been able to operate in many different environments.”

“This is a natural part of that, to be able to operate and defend our own territory,” he said. “For the Norwegian defense forces, it is important to more regularly exercise and train together with our close allies, and the bomber task force is an important asset to be able to conduct high-intensity, combined joint operations. So to do this in the Arctic conditions is timely.”

“As more countries are drawn to the Arctic region, some with competing interests, it’s imperative that we maintain free, fair access for all nations,” Basham said. “And we will continue to work diligently with our NATO allies and partners to ensure that stability.”