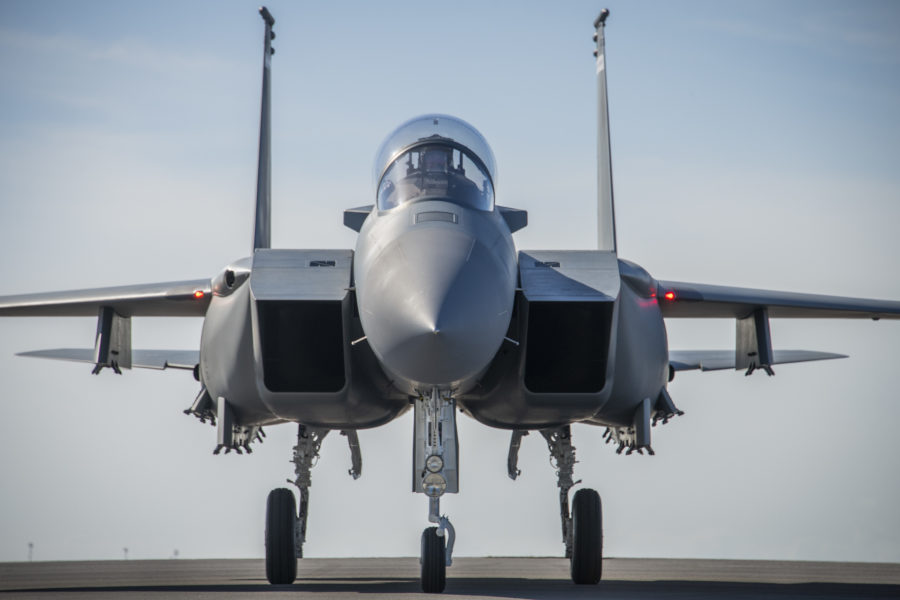 The first F-15EX flew to Eglin Air Force Base, Fla., March 11, a day after the Air Force accepted the airplane at Boeing’s St. Louis, Mo., facilities. The second airplane will be delivered the week of April 6, and will be flown to Eglin by Gen. Mark D. Kelly, head of Air Combat Command.

The Air Force signed the DD250 form accepting the airplane on March 10, and it was flown to Eglin by the commanders of the 40th Flight Test Squadron and 85th Test and Evaluation Squadron, which will put the jet through its paces.

During the flight, an F-15C, the first F-15E, and the new EX flew in formation, service officials said, for a family portrait of the Eagle.

Both initial aircraft will be used to support the Integrated Test and Evaluation team, which an AFMC spokesman said is “a combined [developmental testing/operational testing] approach used effectively by the F-15 test team at Eglin … for modernizing the legacy F-15C/D and F-15E fleets.”

To expedite testing of the EX and declare it ready for operational service, the test team will “leverage previous test data from advanced foreign military sales variants,” an AFMC spokesman said. An expansive flight test program was conducted by the U.S. Air Force on the Saudi Arabian F-15SA, which has the EX’s fly-by-wire flight controls. “However, the F-15EX has USAF avionics and Operational Flight Program software,” the spokesman said. Tests to be done at Eglin will serve to ensure the EX meets specifications and expected performance, and is “operationally effective and suitable for F-15 mission sets prior to fielding,” he said.

The EX model differs from the C/D in having a very powerful mission computer, fly-by-wire systems, conformal fuel tanks, and an additional weapon station under each wing. It also has the Eagle Passive Active Warning Survivability System, an electronic warfare and electronic deception suite also headed for the legacy F-15 fleet. Though it is a two-seat jet, the Air Force plans to operate it with a single pilot. The EX made its first flight Feb. 2 at Boeing’s St. Louis, Mo., facilities.

“With its large weapons capacity, digital backbone, and open architecture, the F-15EX will be a key element of our tactical fighter fleet and complement fifth-generation assets,” Air Force program manager Col. Sean Dorey said in a press release. “In addition, it’s capable of carrying hypersonic weapons, giving it a niche role in future near-peer conflicts.”

The Air Force plans to buy 144 F-15EX aircraft over the next 10-12 years, to replace the F-15C/D model, which “is fast approaching the end of its useful life,” Air Force Life Cycle Management Center said in a press release.  The EX “provides a cost-effective and expedient solution to refresh the F-15C/D fleet and augment the F-15E fleet” to meet National Defense Strategy “capability and capacity requirements well into the 2040s,” while avoiding availability disruptions that would result from a service life extension/modification program, AFMC said.

Six more aircraft are included in Lot 1 and will be delivered to Eglin in fiscal 2023. They will also be used for operational testing. Aircraft in Lots 2 and 3 will be delivered to Kingsley Field, Ore.—the F-15 schoolhouse—and Portland Air National Guard Base, also in Oregon, in fiscal 2024 and 2025, respectively. The 142nd Wing at Portland ANGB will be the first operational unit for the EX.

The process of acquiring the EX began in February of 2019, when then-Chief of Staff of the Air Force Gen. David L. Goldfein signed the F-15EX Rapid Fielding Requirement Document to address the problem of the F-15’s age, now averaging 37 years across the fleet. AFLCMC’s Fighters and Advanced Aircraft Directorate then “developed the acquisition strategy, awarded the contract, conducted design and verification reviews, and worked with Boeing to manufacture and test the aircraft in record time,” according to AFLCMC.

Air Force Materiel Command boss Gen. Arnold W. Bunch, Jr. offered compliments to the “entire team” for “bringing this platform online in record time and in the middle of a global pandemic.” With its “open mission systems architecture and weapons capacity, the F-15EX will provide an outstanding capability for our nation for years to come.”

The Air Force has said the EX will have the structural capability to serve into the 2050s.