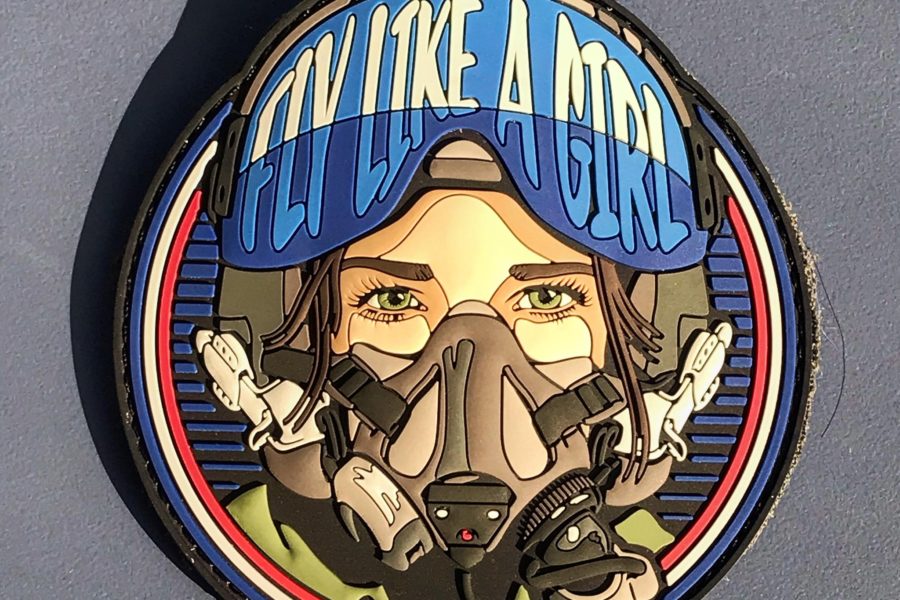 ‘Fly Like a Girl’: The Story Behind a Morale Patch That Honors Female Aviators

Air Force Capt. Melaine Valentin, a T-38C instructor pilot from Laughlin Air Force Base, Texas, leveraged her lifelong passion for visual art when asked to design a morale patch for Air Education and Training Command’s 2019 Women’s Fly-In. Since the event, the patch’s popularity has grown so much that the company she worked with to get it manufactured now sells it on its website.

The patch, which depicts a female aviator in a helmet and mask along with the slogan “Fly Like a Girl,” was a great complement to the event’s focus on uniting USAF aviators from a variety of Air Force Specialty Codes to network with one another, assist the service with fitting gear to female proportions, and serving as aviation ambassadors to the next generation of would-be women aviators.

“Everyone’s always heard … the phrase, you ‘throw like a girl’ or like that kind of off-the-cuff response, and I thought it would be cool to kind of take that back,” she recalled of the patch’s origin story during a March 11 interview with Air Force Magazine. “And yeah, I fly like a girl—I’m awesome. …. so kind of just a fun patch that kind of conveyed … ‘I am a female aviator, and I love it,’ and kind of being proud of that whole idea.”

The Huntington Beach, Calif., native first reached out to the company Bomber Patches in order to get the patches made for the event, but the company subsequently started selling the patch on its website. As of press time, the patch was sold out.

According to Valentin, representation is the biggest hurdle women aviators face, so “having this tangible representation” of their ability to get behind the controls of an aircraft can also give women who never thought about a flying career as a possibility permission to envision such a future.

“This is an example,” she said. “This is a dream that you can have.”

Valentin said Airmen who feel inspired to design a morale patch or challenge coin should be proactive about it and have “the initiative to have a vision and kind of go out and just make the change you want to see in the world.”

“But then on top of that, the avenues that I’ve used, there’s a couple patches of companies out there that you can contact and kind of help you on that journey, and all of ‘em are great,” she added. “They’ll be really helpful to take your vision and transition it to an actual tangible, physical piece of patch or coin or something so that you can kind of start on that journey.”

And the first steps need not be sophisticated, she said.

Her initial designs were drawings on paper, but she’s since begun drafting designs on “an iPad, so it’s a little bit easier of a digital medium to pass” the renderings onto would-be manufacturers.

And while the 2016 U.S. Air Force Academy graduate majored in history, she said art has been a mainstay for her since childhood.

“I wanted to be an artist ever since I could hold a pencil, my mom said,” she told the magazine. “I have constantly been drawing and sketching, and when … in class, I was doodling, so that kind of has been a constant pillar in my life. It’s my love, my art, or my hobby—I do it all the time.”

As she got older, she just set out to find ways to balance that passion with her education and career, she said.

Valentin encouraged fellow artists who might have military aspirations, but also doubts about how those passions might fit together, to go for it.