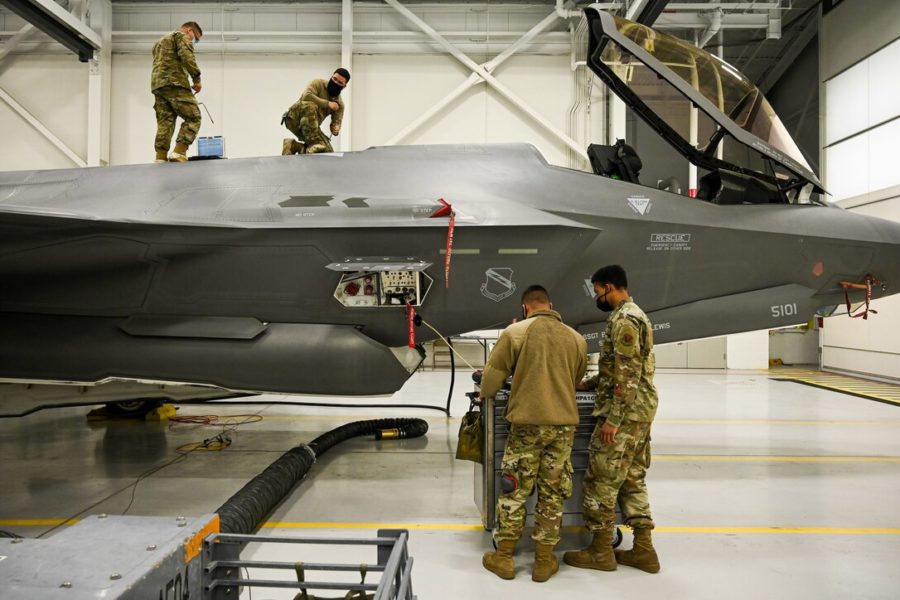 In the wake of threats by members of Congress to cut buys of the F-35 over its high sustainment costs, the Government Accountability Office is recommending that just such a course of action be considered until the fighter’s operating costs come under control.

In “F-35 Sustainment: DOD Needs to Cut Billions in Estimated Costs to Achieve Affordability,” the GAO recommends that the Pentagon get realistic about “affordability constraints” in the F-35 program so that the services—particularly the Air Force—don’t buy more of the fighters than they can pay to operate.

To that end, the GAO recommends holding off on declaring Milestone C—full-rate production—until the services and the Office of the Secretary of Defense develop a detailed plan for improving the F-35’s sustainment costs and living within their expected F-35 budgets. The plan should take a “risk management approach” that assesses the likelihood of success of various sustainment fixes, Congress’ watchdog agency said.

Members of both the House and Senate in recent months have suggested backing off F-35 purchases until the sustainment enterprise catches up to the demands of the extant inventory. Rep. John Garamendi (D-Calif.), chair of the House Armed Services readiness subcommittee, promised a “hell of a fight” if his colleagues moved to add extra F-35s to the Air Force’s budget beyond whatever it formally requested. In each of the past three years, USAF has included a dozen extra F-35s on its “unfunded priorities list,” a wish list of items not included in the formal budget request, and Congress has obliged. But for fiscal 2022, USAF conspicuously did not include F-35s in that document.

The GAO suggests DOD report to Congress annually on its progress in achieving F-35 goals within available funds and that it makes “F-35 procurement decisions contingent on DOD’s progress in achieving these constraints.” The GAO further suggests a new long-term plan be created on how to “afford to sustain the future F-35 fleet.”

While the F-35 has made gains in mission capable rates, the GAO said, these are still short of operator requirements.

Specifically, it noted, the average MC rate for aircraft in the F-35 fleet—indicating the jet can fly and do some of its multiple mission types—improved from 59 percent to 69 percent for all services from fiscal 2019 to fiscal 2020, while the average full mission capable rate—meaning it could do all of its assigned missions—rose from 32 percent to 39 percent over the same period.

The Air Force’s F-35A full mission capable rate was higher than that of all services—54 percent over that period—but the objective was 72 percent.

“Despite efforts to reduce costs” since 2012, the GAO said, the cost of operating the multiservice F-35 fleet increased from $1.11 trillion to $1.27 trillion, calculated over an expected 66-year service life for the program.

There’s “a substantial and growing gap” between what the services thought they’d spend on operating the F-35 and what it’s really costing, with that gap projected to be “almost $6 billion in 2036 alone,” the GAO reported.

If trends are not reversed, “the services will collectively be confronted with tens of billions of dollars in sustainment costs that they project as unaffordable during the program,” the agency said.

In the Air Force’s case, it needs to cut annual estimated sustainment costs per tail by $3.7 million. Otherwise, in 2036 alone, “it will incur $4.4 billion in costs beyond what it currently projects it could afford.”

The Air Force has upset some members of Congress by pushing to divest some of its aircraft in order to pay for development of new ones. In the fiscal 2022 budget request, USAF proposes cutting more than 100 aircraft to save $1.4 billion for research and development.

But because the Air Force has so many more F-35s than the other services, the cost gap adds up much higher. The GAO projects that USAF will have 1,192 F-35As in 2036. If it’s still paying $3.7 million more to operate each one per year than it forecast, that adds up to the $4.4 billion deficit in 2036. Including the other services, that F-35 sustainment deficit comes to about $6 billion, the report said.

“Without assessing cost-reduction efforts and program requirements (such as number of planned aircraft), and developing a plan prior to declaring Milestone C, the DOD may continue to invest resources in a program it ultimately cannot afford,” the GAO asserted. If Congress insists on a performance improvement report and “making F-35 procurements contingent on achieving affordability constraints,” that would improve the Pentagon’s accountability and spur “appropriate actions” to sustain the fleet, the agency said.

In a lengthy response, the JPO said the GAO’s report contained “no surprises” and that the situation is “well known” to the services, the defense industry, and F-35 international partners. The Pentagon “partially concurred” with all the GAO’s recommendations, and the JPO will implement them, it said. The non-concurrences focused mainly on things the Pentagon said it is already doing that would fulfill GAO’s intent and noting that it still doesn’t know when Milestone C will come because of unrelated issues having to do with integrating the F-35 into the Joint Simulation Environment wargaming tool.

The JPO did not directly address the GAO’s numbers but said the situation is not as dire as it may look. It asserted that in base year 2012 dollars, F-35 operating and sustainment costs have grown only seven percent, or $42.8 billion, and that these numbers are verified by the Pentagon’s Cost Assessment and Program Evaluation office.

The JPO said it recognizes that F-35 users “don’t have unlimited funds” and is doing all it can to cut costs.

“Signs of progress” cited by the program office include a decrease in USAF flying hour costs from $37,000 to $33,600 in fiscal 2020. The JPO has also previously pointed out that it has sharply accelerated the number of depots servicing the F-35 and that the full planned number of depots will be up and running six years ahead of schedule.