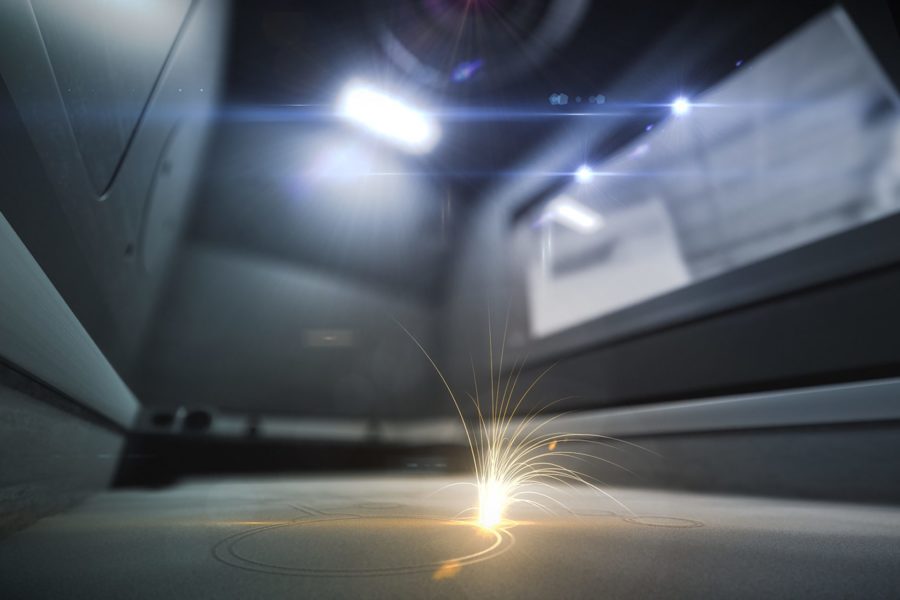 Additive manufacturing is changing the way many products are prototyped and developed. But in most cases, its use has been limited to peripheral components. Not anymore.

GE Aviation is now using the technology to dramatically reduce the parts count, weight and complexity of jet engine parts—slashing production times and fuel consumption in the process.

Additive manufacturing—also known as 3D printing—builds up super-thin layers of fine metal powder, which are heated with lasers or electron beams to form solid metal structures.

“Additive can make parts that would be impossible with traditional manufacturing techniques,” says Mark Shaw, director of government programs and technology for GE Additive. Another benefit: Because additive parts are made using 3D computer models—and without molds or conventional tooling—designs can be continually adjusted. That’s not possible with conventional forging.

GE has been investing in additive technology and know-how for nearly a decade, Shaw says. The company broke off GE Additive as a stand-alone business in 2016.

“Now we want to bring the speed of additive to the Air Force,” Shaw says.

The Air Force is all-in. Assistant Secretary of the Air Force for Acquisition, Technology, and Logistics Will Roper touts additive manufacturing as a critical tool for accelerating repairs, cutting costs, and getting old airplanes back in the air in a hurry. “Going faster is not just a tagline for us; it’s a dead serious business about keeping the Air Force competitive and dominant,” he has said.

Early work in 3D printing focused on replacing plastic parts. GE is taking additive to another level. The insides of jet engines reach temperatures exceeding 1300 degrees and endure incredible stress. GE has been producing FAA-certified airworthy engine parts for the civilian market for five years. And now it’s ready to bring that expertise to bear for the Air Force.

“Additive is complex,” Shaw says. “It brings great value but it takes a lot of learning and development to get to that point. GE has made the investments, so we have the technology and the know-how. We’ve built an entire ecosystem for additive manufacturing, from the material science to the structural engineering and everything in between. That’s our recipe for success in our work with the Air Force.”

GE’s partnership with the Air Force on additive manufacturing began with replacement parts for older aircraft that are out of production. Using additive processes meant avoiding the need to recreate expensive tooling, molds and dies in order to build a small number of parts.

“If I need two or three parts for a B-52,” says Will Roper, “I can just turn that over to one of our printers.” The payoff goes beyond cash: It also saves time. “With additive, everything’s a warm start,” says Shaw. Lead times for some engine parts have been reduced by a year or more.

GE is also showing that 3D printing can revolutionize new engine design. Its Catalyst engine for small commercial turboprop aircraft was designed and built with additive processes from the start. The engine was developed in half the usual time. Testing was completed in six months versus a year.

“Speed is the currency of additive,” says Lisa Coroa-Bockley, general manager for advanced materials commercialization at GE Aviation, “That’s what we can offer the warfighter.”

But durability and simplicity are also advantages. With additive, GE has slashed the number of parts in a new engine and ramped up reliability. Coroa-Bockley said.

GE’s first additive manufactured part—the first ever produced for the civilian aviation market—was the LEAP fuel nozzle, which cut parts count from 20 to one. That “nozzle ended up being five times as durable,” Coroa-Bockley said.

In the Army’s Improved Turbine Engine Program (ITEP) competition, GE leveraged those techniques in developing its T901, which will replace the 1970s-era T700 engine on the UH-60 Black Hawk and AH-64 Apache helicopters.

For the Air Force, GE is starting “with the simplest parts, like a housing,” Coroa-Bockley said. “We prove that concept out with the Air Force, get them to the point where they are comfortable with that, and then move on.”

GE launched their additive partnership with the service last year. One goal they have right now is to make Tinker Air Force Base in Oklahoma a USAF center of excellence for additive. “It’s all about helping the Air Force gain capability and capacity for metal additive manufacturing,” says Coroa-Bockley. “They want to do that as rapidly as they can to improve readiness and sustainability.”

U.S. Special Operations Command has awarded a contract for its Armed Overwatch program, selecting L3 Harris Technologies’ AT-802U Sky Warden as the winner of its competition for a low-cost aircraft to fly surveillance and strikes in austere locations. The deal could be worth up to $3 billion and will include…

The Air Force’s aging E-3 Sentry fleet is on its last legs. The service has already asked in the 2023 budget to retire half the fleet, and its replacement, the E-7 Wedgetail, has been selected. But now, lawmakers and observers are asking a new question: How quickly can the Wedgetail…

Air Force acquisition chief Andrew Hunter sees the need for faster design and development cycles for the service—they just likely won’t happen as quickly as his predecessor pushed for. As part of a panel discussion at Farnborough International Airshow, Hunter laid out his view of an Air Force acquisition and…