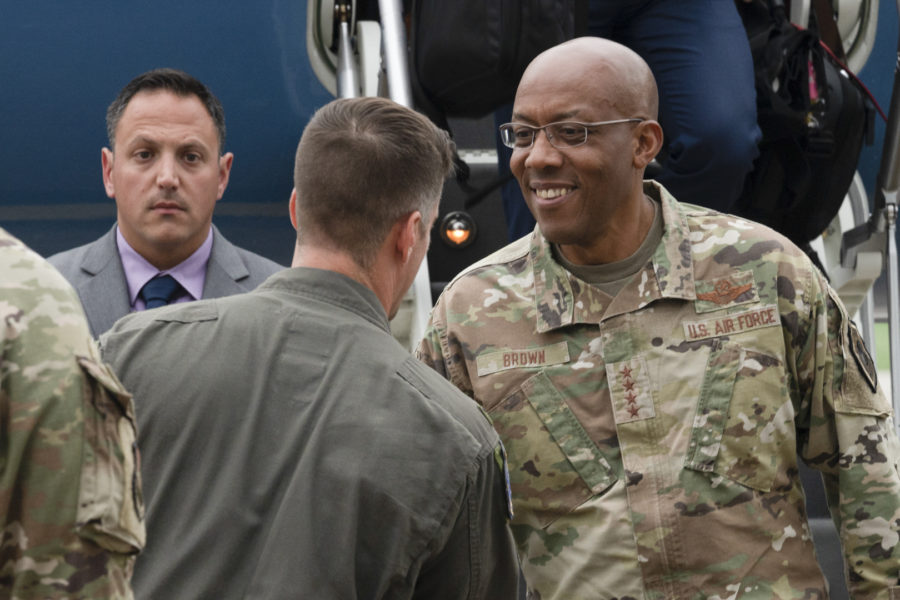 Brown’s first trip back to the theater where he commanded Pacific Air Forces from 2018 to 2020 comes at a time of heightened U.S. competition with China. Brown kicked off his trip at Travis Air Force Base, Calif., before visiting Joint Base Pearl Harbor-Hickam, Hawaii; Andersen Air Force Base, Guam; Kadena, Air Base, Japan; Osan and Kunsan Air Bases, South Korea; Eielson Air Force Base, Alaska; and U.S. partners and allies in Singapore and the Philippines from Aug. 4 to 13.

“In order protect and enhance our collective international security, we need to focus on purposefully fostering our relationships,” Brown told senior enlisted leaders Aug. 1 at a gathering of 65 nations outside Washington, D.C.

Brown reflected on the relationships he built at the Air Command and Staff College at Maxwell Air Force Base, Ala., in 1997. His former classmates included the current air chiefs of Japan, Mexico, and Israel, he said.

Just days after delivering the message of nurturing long-standing relationships, Brown was on a plane for the Indo-Pacific to rekindle some of his own.

Brown set the stage for his Pacific swing Aug. 4 at Travis, the largest air mobility wing, and what he called the “Gateway to the West” for its role in defense of a free and open Indo-Pacific.

At Hickam, Brown discussed the value of strengthening relationships with allies and partners, and 15th Wing Airmen highlighted how they work with regional partners to integrate joint operations. As he spoke, 14 nations, hosted by Indonesia and the United States, were conducting exercise Garuda Shield 2022.

At each stop, Brown held an all-call with Airmen to discuss the Air Force’s role in the National Defense Strategy, to talk about resiliency, and to urge Airmen to innovate. In small group settings, he had breakfasts and lunches with Airmen to gather their feedback and to provide mentorship, according to a readout provided to Air Force Magazine.

At Kadena Air Base on Aug. 11, Brown said Airman must exploit the air domain through mission control and empowerment of Airmen.

In South Korea, Brown visited both Osan and Kunsan Air Bases on Aug. 12, where in 2007-2008, he served as 8th Fighter Wing commander. Brown then flew north to Eielson Air Force Base. Details were not available about his Eielson trip, and the Air Force chief held no public meetings before his partner-building trips to Singapore and the Philippines.

Brown was in the city state of Singapore Aug.7-10, one of the strongest U.S. partners in Southeast Asia, to reaffirm the strong bilateral defense partnership and to discuss ways to enhance cooperation. There, he met with the Singapore minister of defense, chief of the defense force, and chief of the Air Force. He participated in a national day parade and was given Singapore’s military Meritorious Service Medal.

“Strong bilateral relationships like that of the U.S. and Singapore are cultivated over time and are based on communication and transparency and shared values and interests,” Brown said, according to an Air Force press release.

Brown’s final stop was the Philippines, where a new government has signaled its willingness to cooperate militarily with China. Brown’s visit was consistent with a Defense Department hope to deepen the U.S.-Filipino defense partnership after strained relations under ex-president Rodrigo Duterte.

In Manila, Brown met with the Chief of Staff of the Philippines Armed Forces and the Air Force command general to discuss ways to deepen cooperation. The Philippines is among the nations with whom China has acted aggressively on the high seas and maintains a maritime dispute. The Philippines, nonetheless, is deeply dependent on China economically.

“The U.S.-Philippine alliance is strong; we support a resilient and independent Philippines with the capability to protect its sovereignty and defend its security interests on its own terms,” Brown said, according to a press release.

The Air Force Chief of Staff told Philippines defense leaders that the United States would support Philippine Air Force modernization requirements. Brown is expected to brief members of the media Aug. 17 to provide further details about the objectives and accomplishments of his Pacific trip.