Skip to content
A doctor and several nurses from the 445th Airlift Wing’s Aerospace Medicine and Aeromedical Staging squadrons, board a C-17 Globemaster III on April 5, 2020 heading to Joint Base McGuire-Dix-Lakehurst. The Airmen were notified April 4, 2020, that they would be mobilized to New York City to help with the COVID-19 pandemic. Air Force photo by Patrick O’Reilly.
Expand Photo 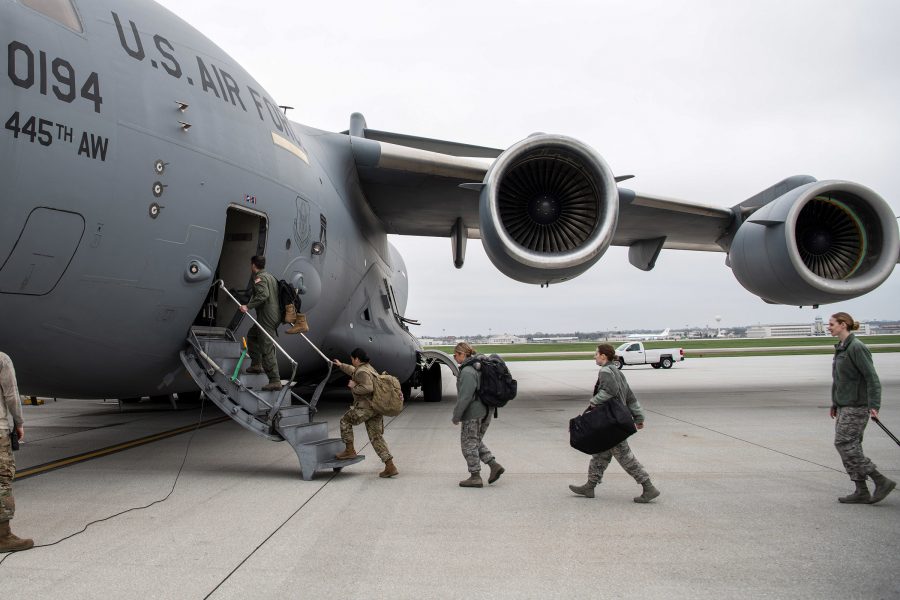 Air Force Pararescuemen live by the motto, “These things we do, that others may live.” Air Force Chief of Staff Gen. David Goldfein owes his life to that motto, having been rescued by PJs in Serbia after his F-16 was shot down in 1999.

Now he’s seeing that phrase in a new light. “We’re seeing that same kind of service and commitment from across the medical community,” Goldfein said in a recent interview with Air Force Magazine. “I couldn’t be prouder of them.”

“They are there, they are racing into the breach. They are going every day to treat,” he said. “This is not just Air Force medics and nurses, this is [Health and Human Services], this is the response team. These are our medical professionals who are really the big MVPs right now of this response, and every one of them has a family, spouses, kids, parents, all who are worried about them. And yet they don’t hesitate. They go into the breach and take care of others.”

Across the entire Defense Department, there are about 15,000 Active Duty personnel deployed, including more than 4,000 medical personnel. There are also about 33,000 National Guard troops called up to help with individual state responses.

“We are building and outfitting nearly 150 alternate care facilities, with over 83,000 beds to alleviate stress on the medical infrastructure,” said Maj. Gen. Dawne Deskins, director of manpower and personnel for the National Guard Bureau Joint Staff, in an April 16 town hall hosted by the COVID-19 Military Support Initiative.

Within the Air Force, Goldfein said his goal from the outset was to give commanders the right amount of leeway to decide what’s best for their installations and communities, while not being too absent so as to leave them foundering without direction. “They understand the overall intent and basic guidelines that align us with the Department of Defense and how the national response is going,” Goldfein said. But he’s been careful to give Airmen “the decision authority to be creative and move out, according to what their population requires at that base. … There’s a balancing act that we always have to have that we’re not too heavy handed from the top.”

This has led to some creative responses, such as a pharmacy at Whiteman Air Force Base, Mo., that is setting up curbside delivery for pharmaceuticals, reducing delivery time and face-to-face interactions.

“This is a local commander who is looking at their population, and ways to get after that,” he said.

USAF leaders at the Pentagon split into blue and silver teams and alternate working from home and working inside the Pentagon. On his “off days,” Goldfein said, he tries to talk to wing commanders for updates and he calls Airmen and USAF civilians who have been diagnosed with COVID-19 to “see what their experiences are like, how their families are doing.”

Responses vary from one patient to the next. “That’s essentially the intensity, the nature of this virus,” Goldfein said. “We’re still learning so much about it as we go forward.”