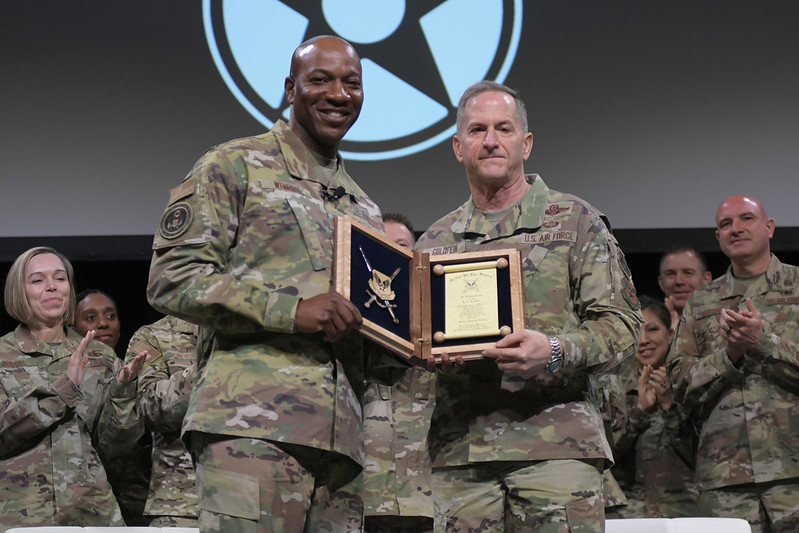 Goldfein Presented with Order of the Sword

The award was a unanimous decision from enlisted leaders of the Air Force, Wright said. There have been 250 recipients of the award, with four former chiefs of staff receiving the award while in the service’s top position.

The surprise, emotional awarding came during Goldfein’s last Air Warfare Symposium speech as chief, before his expected retirement this summer.

Russian President Vladimir Putin’s invasion of Ukraine has united NATO and proven a robust U.S. air and space capability that does not require a no-fly zone, but invasion could have been deterred if the U.S. had stronger air power, said experts at an AFA Warfare Symposium panel on the European…

The Department of the Air Force’s annual Spark Tank competition takes place March 4, as six teams will take to the stage at the AFA Warfare Symposium in Orlando, Fla. Each team will pitch the most senior leaders in the Air and Space Forces on how their innovations can save…

Spark Tank Finalists: Video Games as the Future of Training?

The Department of the Air Force’s annual Spark Tank competition takes place March 4, when six teams will take to the stage at the AFA Warfare Symposium in Orlando, Fla. Each team will make pitches to the most senior leaders in the Air and Space Forces on how their innovations…

The Department of the Air Force’s annual Spark Tank competition takes place March 4, when six teams will take to the stage at the AFA Warfare Symposium in Orlando, Fla. Teams will pitch ideas to the most senior leaders in the Air and Space Forces on how innovations can save…

The Air Force plans to conduct a full review of its Exceptional Family Member Program. The program is intended to assist service members with special needs family members, but it has been plagued by issues, including short staffing and long waits for enrollment. Chief Master Sergeant of the Air Force…

In an interview with Air Force Magazine at AFA's Air Warfare Symposium, Chief Master Sergeant of the Air Force Kaleth Wright outlined his top four priorities for the last six months of his tenure as the service’s top enlisted leader. They are: Fixing the Enlisted Performance Reporting system, eliminating Weighted…

Here’s What the Next Chief Was Saying Last Week

Gen. Charles Q. Brown sat down with reporters at AFA’s Air Warfare Symposium, just days before officially being tapped as the next Chief of Staff of the Air Force. The wide-ranging interview touched on Joint All-Domain Command and Control, logistics while under attack, the challenges facing U.S. forces in the…

The top couple in the Air Force on Feb. 27 hosted the first-ever Air Force-level Key Spouse conference, bringing together 300 spouses from across the service to discuss issues they all face and to find ways to improve the quality of life in the service. “Our key spouses are probably…

The Air Force has updated its official song to be more inclusive of the women who wear the uniform, Chief of Staff Gen. David Goldfein announced. The third verse of the song, which originally included the lines “to a friend we send a message of his brother men who fly”…