Skip to content
Navy F/A-18 Super Hornets fly in formation behind a Kadena AFB, Japan-based KC-135. The aircraft were all acting as adversary air in Exercise West Pac Rumrunner, which simulated an air attack on Kadena. Staff photo by Jennifer Hlad.
Expand Photo 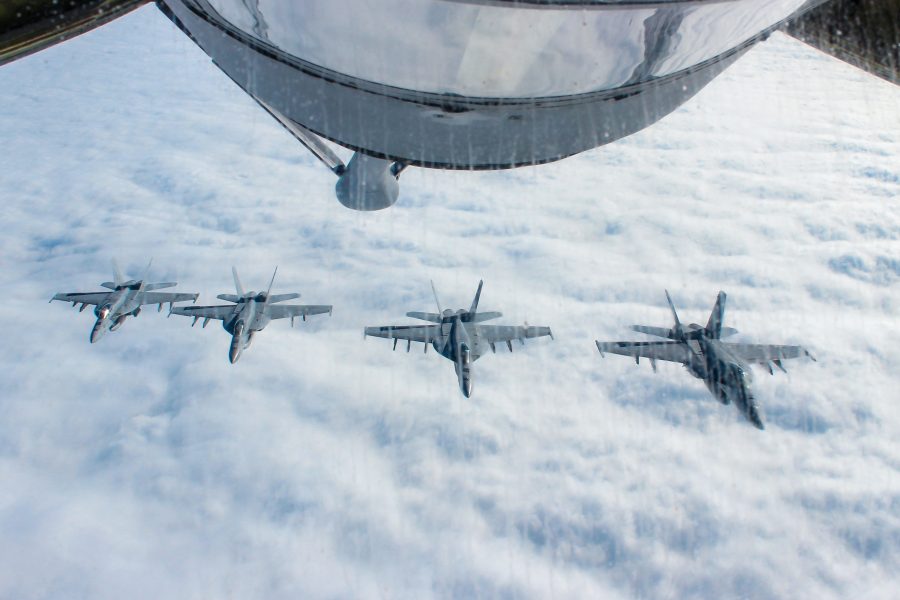 KADENA AFB, Japan—More than 50 aircraft from three US bases took to the air over Okinawa on Jan. 10 for a complex joint exercise simulating an attack on the largest USAF base in the Pacific.

“Kadena was defending itself today,” explained Capt. Brian Davis, the exercise director and a pilot with the 67th Fighter Squadron.

The exercise, dubbed WestPac Rumrunner, included Navy aircraft from the USS Ronald Reagan, Marines from Marine Corps Air Station Futenma, soldiers from the 1st Battalion, 1st Air Defense Artillery Regiment, and Air Force special operators, along with airmen and several types of aircraft from Kadena. In addition to the main defensive counter-air scenario, it also incorporated water rescue training, agile combat employment, and forward air refueling. As part of the exercise, troops had to accomplish their mission even though the communication channel to the main headquarters was cut off.

“One of the main focuses of WestPac Rumrunner is, ‘What do we have and what can we do with it,’” Davis said.

The idea for the exercise came about on a US Navy ship in the South China Sea, Davis said. “We were planning Valiant Shield and I sat down with a couple of friends there, and I said, ‘What if we do a Defend Your Base Friday?’”

It came together in about four months, and instead of trying to meet a specific requirement, the intent was “to see how much we could do,” he said. “What we discovered is we can do a lot.”

Brig. Gen. Joel Carey, commander of the 18th Wing, told Air Force Magazine the service has realized that while it has a “viable, respected deterrent at present, we can’t rest on our current capabilities. We’ve got to become harder targets. We’ve got to be more agile. We’ve got to, in some ways, be able to go back to our roots in working not just in our main operating bases and out of our main operating bases, but in other more expeditionary dispersed locations.”

This exercise is taking Pacific Air Forces and Indo-Pacific Command leadership’s intent “and going with it,” he said.

“For decades, we have operated in this part of the world in a way where we would build power in a particular location, and then we would employ from that main location,” Carey continued. “That’s still going to be part of the concept of operations into the future, and that’s why locations—bases like Kadena—are so important and will continue to be for stability in this region and our continued relationship with our Japanese partners.”

But as the US’ competitors’ capabilities grow, “we have got to continue to … develop capabilities that cause them problems, in a way that we haven’t here in recent years. And one of those ways is to increase expeditionary capability, increase dispersed operations in different locations than we have traditionally operated.”

Maj. Alex Demma, director of operations for the 961st Airborne Air Control Squadron, said the exercise “allowed us to coordinate the battle from assets that were coming from different locations, coalesce in one place, and then execute the mission.”

Using only assets from the Western Pacific “really helps us as a joint force to exploit the organic capability that we have in this [area of responsibility] and practice concepts that are imperative to how we strategically employ these assets at the tactical level,” he said.

And, Davis noted, having the exercise at Kadena with mainly local assets had another upside:

“A fight that size at another exercise would probably be in the millions,” he said. “We did it for $7,000.”