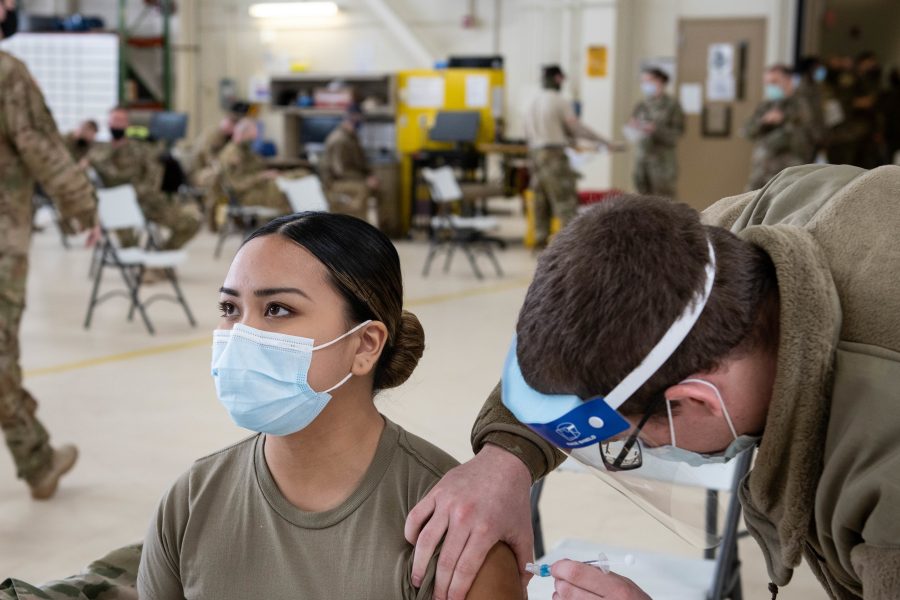 Guard Has Given Out Nearly 38K COVID-19 Vaccines to Troops

As of the afternoon of Jan. 29, the National Guard Bureau had given out more than 37,580 COVID-19 vaccines to its uniformed personnel, with about 4,000 troops having received the two doses needed to grant maximum protection against the virus, Air Force Maj. Gen. Jerry L. Fenwick, director of NGB’s Office of the Joint Surgeon, told reporters during a Jan. 29 press call.

Troops who are deployed following their first dose are being prioritized for second doses in their deployed locations—whether they’re mobilized stateside in the nation’s capital in the wake of the Jan. 6 rioting at the U.S. Capitol or serving overseas. Unvaccinated troops who are currently deployed to Washington, D.C., are also being prioritized for shots if they’re interested in getting them, Fenwick added.

“We have to look at this in a dynamic sense, and so our positivity rates, if we look at it from the 5th of January—which we consider the beginning—to the end, or to today, we’re looking at positivity rates of about 1 to 3 percent,” Fenwick explained. “And so, over time, if we snapshot it, it comes out to about two percent.”

Fenwick said that positivity rate should be viewed through “the lens of the national percentage rate of 9.3 percent,” praising the Guard’s “force health protection” and the way it has advised Guard troops serving in the city.

However, he said he couldn’t publicize the total number of Guard members who’ve tested positive for the new coronavirus since being mobilized within the District.

“Right now, I’m not at liberty to disclose the actual number from one time frame to another timeframe,” Fenwick told reporters. “Our office has been tracking the actual percentage rates over a period of time due to the dynamic nature of the mission.”

Guard troops who are exposed and test positive for COVID-19 while on duty in the District are placed in isolation at area hotels where they were already staying, Tumminello said.

“There’s a white cell or a buddy care at every hotel … where those Soldiers [and Airmen] are staying, and … they’re visited at least three times a day making sure they have all the food and care that they need,” he explained.  “And if there’s anybody that has any increase in their symptoms, or [is] feeling not well, they would be moved to a hospital, but that has not had to happen.”

The DCNG made headlines last week after photos of Guard troops sleeping on the floor of a parking garage located close to the Capitol building—some visibly unmasked and not positioned at least six feet away from their colleagues—circulated on the internet.

“When National Guard members departed from their individual states and upon arrival to the DC Armory, they had their temperatures checked and completed a screening questionnaire,” NGB spokesperson Wayne V. Hall wrote in a Jan. 25 email to Air Force Magazine. “Masks and social distancing are required where the mission allows. They are following these procedures daily.”