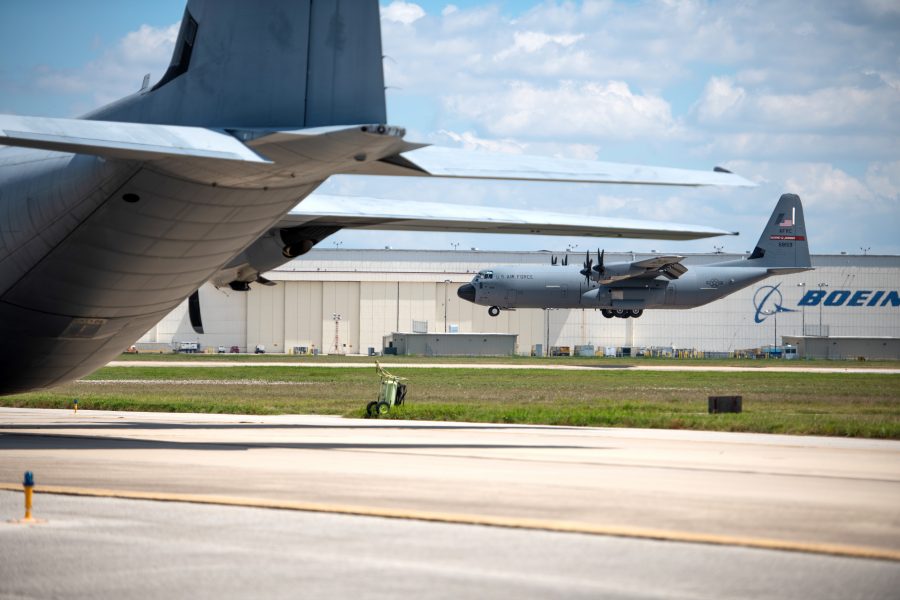 Air Force installations along the Gulf Coast are starting to resume operations after Hurricane Sally made landfall early Sept. 16 over Gulf Shores, Ala., as a Category 2 storm.

Early announcements indicate the bases weathered harsh winds and rain but avoided widespread damage, though nearby residential and commercial areas were battered. The National Hurricane Center cautioned of “catastrophic and life-threatening flooding” in the Florida Panhandle and southern Alabama.

In Alabama, Maxwell Air Force Base reported that the base weather office had given the all-clear as the storm left.

“She’s still causing a bit of rain and wind locally, but things should be clearing up heading into the weekend,” the base said of Sally in a Sept. 17 Facebook post. “River Road on Maxwell is still a no-go place as the Alabama River is expected to reach flood stage and stay there for a couple of days.”

To the west, Keesler Air Force Base, Miss., incurred “minimal damage” and began reopening Sept. 17, according to a base release.

“The 81st Training Wing, along with help from the 403rd Wing, was able to take safety precautions before the hurricane made landfall,” the release said. “These safety precautions not only helped minimize the damage on base but also ensured the safety of Keesler Airmen and their families.”

Col. Heather W. Blackwell, the 81st Training Wing commander, said in a Sept. 16 video that Keesler was assessing damage and reopening its runway so WC-130J “hurricane hunter” aircraft can resume their reconnaissance flights.

“Our goal is to be fully mission-capable by the end of today,” she said.

Blackwell added on Facebook that she had visited Airmen in Basic Military Training at Keesler on Sept. 16: “They have plenty of food, great attitudes, and are continuing their training.”

Eglin Air Force Base, Fla., supervisors can bring their employees back to work if their commutes are safe enough to do so. The Florida Panhandle base is conducting mission-essential operations only and began assessing storm damage Sept. 17.

“Pockets of the area are flooded, but we are OK,” Eglin spokeswoman Ilka Cole said. “Our response force teams are in recovery mode and assessing damage to Eglin main and the ranges. Our aircraft are currently hangered.”

Tyndall Air Force Base, another Florida installation that already faces a long rebuild from Hurricane Michael in 2018, is gradually opening on-base facilities.

“Unit leadership will modify duty hours as necessary to meet mission-essential tasks,” the base instructed. “Work with your leadership to adjust work schedules based on individual circumstances. Stay alert for high water hazards throughout the local area.”

Nearby Hurlburt Field, Fla., is closed while recovery begins, the special-operations installation said in a Sept. 17 release.

“Initially, the most significant damage noted is to infrastructure on the Soundside near the marina, and the foundation of the pedestrian bridge that crosses Highway 98,” Hurlburt said. “The pedestrian bridge is currently closed until repairs can be made. Recovery teams are spending today assessing the damage and securing the base.”

Hurlburt officials encouraged Airmen and their families to restock their hurricane supply kits as soon as possible because more storms are forming in the Atlantic Ocean.

“Managing a pandemic and hurricane season can be stressful,” Hurlburt said on Facebook. “Please look out for your wingmen.”

This is one of the busiest hurricane seasons the National Oceanic and Atmospheric Administration has ever predicted in the Atlantic basin, with as many as 25 named storms possible. Nearly half of those could be hurricanes, and as many as six hurricanes could be highly destructive with winds measuring 111 mph or greater.

The region has seen 20 named storms so far during Atlantic hurricane season, which ends Nov. 30.