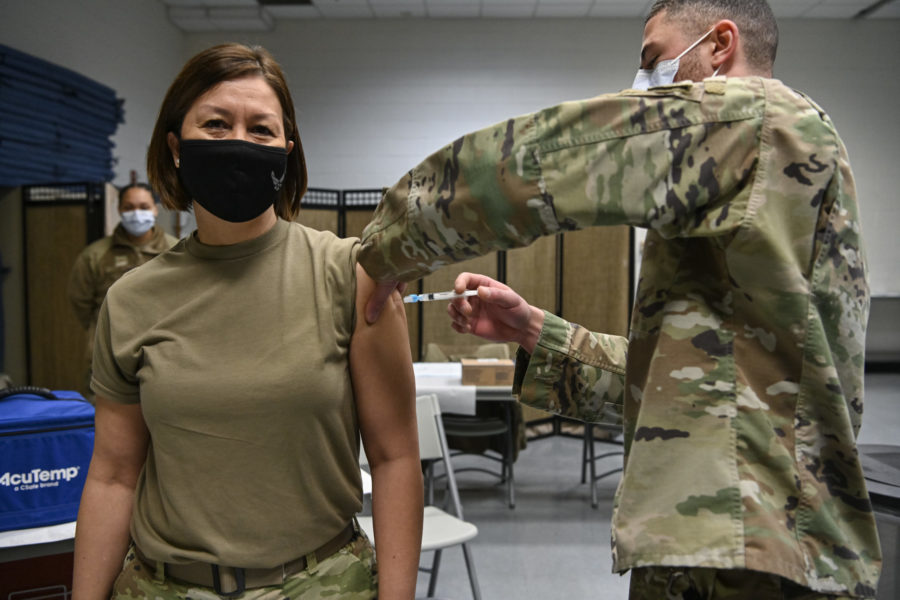 When it comes to easing enlisted Airmen’s reservations about getting the COVID-19 vaccine, the only way out is through, Chief Master Sgt. Brian P. Kruzelnick, Air Mobility Command’s command chief master sergeant, said during the Air Force Association’s virtual Aerospace Warfare Symposium.

Air Force Maj. Gen. Jeff Taliaferro, the Joint Staff’s vice director for operations, on Feb. 17 told House Armed Service Committee legislators that one-third of all U.S. military troops have declined the COVID-19 vaccine, though he said that decision doesn’t make them non-deployable. A recent Blue Star Families survey found that military family members are also largely on the fence about getting inoculated against the virus, Air Force Magazine previously reported.

Enlisted leaders can help ease their Airmen’s nerves through “timely and accurate communication” that removes emotions and sticks to the facts, Kruzelnick said during a pre-recorded enlisted leadership panel that aired on Feb. 25.

“In light of not communicating often and early with your team, they’re gonna get information elsewhere,” he explained. “And where they get it elsewhere, most likely might not be accurate—it might be misinformation that makes the decision even tougher after that.”

If leaders enter into these conversations prepared to tell Airmen how they fit into the situation and how it impacts them, Kruzelnick says, they can help their teams “make the best decision possible.”

“I think for us, it was transparency,” Hoffman said. “It was about an informed decision. It was about a discussion, and I think that led to Airmen making the right decision for themselves and the Air Force.”

Kruzelnick also encouraged leaders who are eligible for vaccines to “get up front” and get vaccinated, since he’s observed a trend where people want to see someone else go through the process first to make sure it’s safe before taking the dive themselves. However, he said he anticipates the enlisted force’s “take rate” for the vaccine to improve with time.

Air Force Chief of Staff Gen. Charles Q. Brown Jr. said that during his recent travels, he informally asked Airmen to help him understand “the atmospherics of those that decide to take the vaccine versus those that elected not to.”

“They didn’t tell me whether they have taken the vaccine or not, ’cause I’m not taking names,” he told reporters during a vAWS media roundtable Feb. 25.

Brown’s findings largely mirrored Kruzelnick’s insights: Airmen, he said, want to know more about the COVID-19 vaccines’ potential side effects and see people they trust make it through the vaccination process before getting the shot themselves.

However, he also found some Airmen are frustrated that being vaccinated doesn’t negate the need for mask-wearing and social-distancing, and that is deterring them from opting in.

He said he’s telling these Airmen that the sooner they get vaccinated, the sooner everyone will be able to ditch the mitigation measures.

And while the independent Air Force amn/nco/snco Facebook page on Jan. 14 shared photos of a memo from a Vandenberg Air Force Base, Calif-based squadron suggesting that non-vaccinated Airmen ran the risk of having leave requests denied, Brown clarified that USAF isn’t punishing troops for being on the fence about the vaccine.

“We are not denying leave and not allowing folks to travel because they have not gotten the vaccine,” he told reporters.