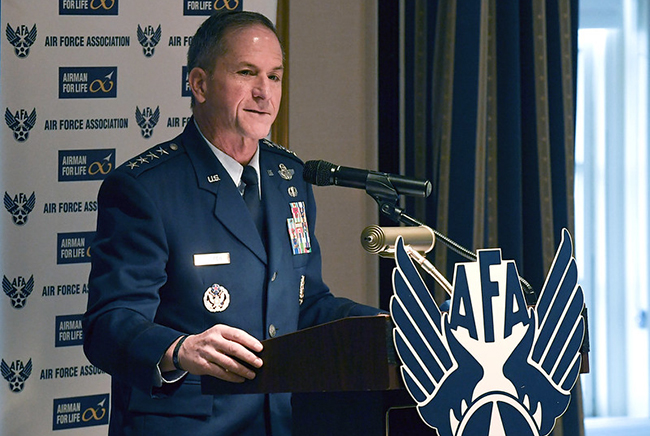 The Air Force plans to redirect $30 billion through the early retirement of legacy programs to fund new initiatives in connectivity, space, combat power projection, and logistics.

Chief of Staff Gen. David Goldfein spelled out his plans in further detail Nov. 6 at an Air Force Association event in Washington, D.C., defining the four investment “bins” and assigning amounts to each over the future years defense plan (FYDP), beginning in 2021:

“If you want to achieve [Defense] Secretary [Mark] Esper’s objective of gaining irreversible momentum for the National Defense Strategy, we have one good year to do it,” Goldfein said, echoing common sentiments that increased defense budgets are highly unlikely after the coming budget cycle.

Goldfein said the Air Staff “took a look at every legacy program we have and asked the question: does this contribute significantly to the 2030-2038 timeframe?” If the answer was no, then work began on trying to accelerate its retirement.

Connecting the force—“not just the Air Force, but the Joint Force,” he emphasized—is the most critical step. Wargames bear this out. Citing a recent wargame at the National Aerospace Intelligence Center at Wright Patterson AFB, Ohio, he said, a future Air Force prevailed “in one of the most challenging scenarios we could put on the table.”

That exercise—featuring “some of the best red teamers on the planet, who understood the threat and where the threat is going,”—projected a future contest in the 2030-38 timeframe. “For one of the first times we’ve seen in a while, we won,” Goldfein said.

The key was joint force command and control, he explained. “The first thing you need to do to win is you’ve got to connect the joint force,” he said. “We truly have to operate as a team: Connecting command and control, connecting sensors and shooters, taking humans from in the loop to on the loop, operating at machine speeds so you can close thousands of kill chains in hundreds of hours.”

Repeatedly he emphasized the need to connect platforms across every domain. “While connecting an F-22 and an F-35 and an X-37 is interesting, let me tell you what’s more important,” he said. “Connecting an F-35, a B-52, an Aegis cruiser, a Special Purpose MAGTF [Marine Air-Ground Task Force], a Brigade Combat Team, and new satellites.”

Systems that can’t connect, or that operate in their own separate worlds, will not be considered in the future, he continued, describing a plant visit at which he viewed an aircraft offering. “I said, ‘So you’re also the same company that builds a space capability, so I assume this connects to that, right?’ And what I got was, ‘no, that’s a separate part of the company,’” Goldfein recalled.

That’s not an acceptable answer, he went on. “If you understand one thing from me, I’ll make this loud and clear: I’m walking away from that offering because I can’t afford to buy a capability that doesn’t connect, doesn’t share,” he told a mostly industry audience. If it doesn’t connect in all domains, if it doesn’t share information, … if we haven’t built artificial intelligence into the tactical edge so it’s learning, and I can take humans out of the loop and put them on the loop, then it’s no longer of interest to me as Chief.”

Using common data formats, a common information architecture, and pre-generated algorithms, the space asset identified an enemy vessel, then passed the target to an ISR asset, which used its own sensors to raise the confidence level of what was being seen. Assured the target was what the satellite spotted, the ISR asset passed the target and coordinates to a C2 platform, which selected the optimum weapon for attacking the target and handed that assignment to a ship.

“The first human in that kill chain was on the Aegis cruiser,” Goldfein said.

GETTING TOUGH IN SPACE

Goldfein said it’s hard to talk about space because of classification levels, but the $9 billion he intends to invest there is essential to ensure future victory and to deter aggressors from taking a chance against the United States and its allies.

“We have got to be the first mover in space,” the Chief said. Acknowledging the challenges of asking for $9 billion for unnamed defensive and offensive space capabilities, he said he will press the edges of classification to make his case. “If you don’t see the pluses, all you’ll focus on is the minuses,” he said, of lawmakers concerned about program cuts. “Much of the mitigation—the reason for taking legacy [systems] down—is that we’re building up in classified.

The fourth and smallest investment area is logistics. Goldfein said future enemies will seek to deny logistics chains and battlespace access. “We have had the luxury for the past 18 years of moving in personnel and supplies at the time and place of our choosing in an uncontested way, and we do not think that is a good assumption for the future,” he said.

That means the Air Force must be more expeditionary, more mobile, more flexible. “This is about preserving our ability to move,” he said, promising an investment of some $3 billion over five years to support that capability.