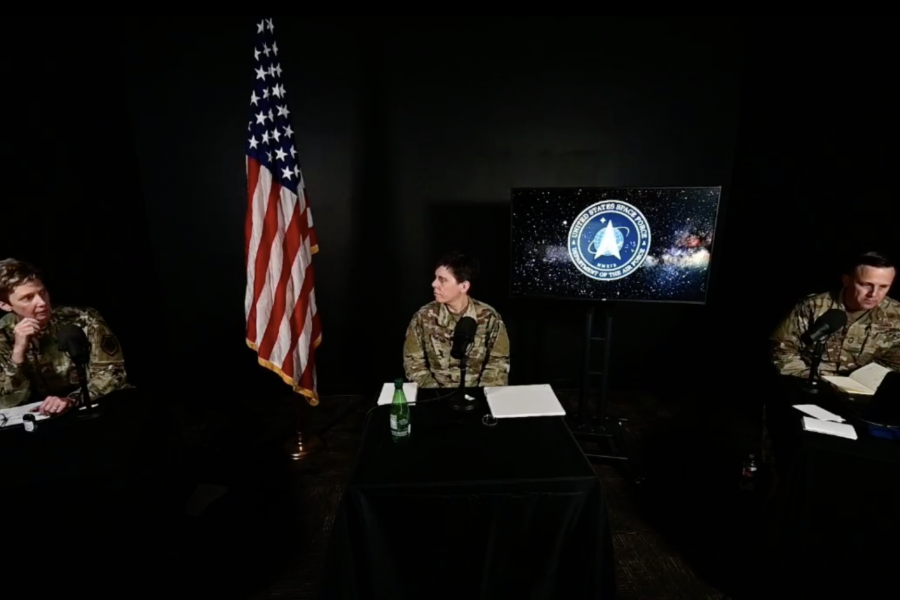 As the Space Force stands up, there’s one constituency it has to get on board with its plans: Airmen.

The Space Force squeezed in 10 “roadshows” to explain its mission before the coronavirus pandemic made it unsafe to gather for the presentations. Troops at Peterson, Schriever, and Buckley Air Force Bases and the U.S. Air Force Academy in Colorado; Patrick Air Force Base and Hurlburt Field, Fla.; Vandenberg Air Force Base, Calif.; Robins Air Force Base, Ga.; Thule Air Base in Greenland; and the Pentagon were briefed between March 3-12, according to service spokeswoman Lynn Kirby.

Instead of holding in-person events, the Space Force has switched to spreading the same message online through videos, webinars, and Facebook Live. It recently offered livestreams tailored to the intelligence and cyber communities. Acting Under Secretary of the Air Force Shon Manasco, Vice Chief of Staff of the Air Force Gen. Stephen Wilson, and Space Force Vice Commander Lt. Gen. David Thompson held a town hall with commanders at the end of April as well.

“The content of the roadshow hasn’t changed, just the questions we are asked at each event tend to vary,” Kirby said. “Many questions are regarding career issues such as promotion opportunities and career tracks in the Space Force. As these planning details are in development, we address what we know to be true today, share the direction and vision for the future while taking great care not to speculate.”

The presentation covers many of the fledgling service’s main talking points:

It also notes several types of threats to the U.S. that the Space Force would tackle:

“We need an independent force to focus on the scope, scale, and complexity of the space domain—like our sister services that focus on land, sea, and air,” the slideshow said. “This requires: space-focused experts developing space doctrine and tactics; rapid space weapon system acquisitions; intelligence, cyber, and space-focused domain planning and operations.”

The new Space Staff is finding its own officials to run intelligence, space and information operations, plans, programs and requirements, and analysis and assessment. It plans to share personnel, communications, and logistics and installation support officials with the Air Staff, according to the slideshow.

It suggests that using some of the same pieces of the Air Force secretariat will make the Space Force headquarters up to 50 percent smaller than it might have otherwise been.

It also details how the Space Force will transfer groups of people from the Air Force. The first batch of USAFA cadets have already graduated into the Space Force. Reserve Officer Training Corps and Officer Training School students will start joining the service Oct. 1, closely followed by newly enlisted space operators on Oct. 7.

An accession date hasn’t been decided for newly enlisted cyber and intelligence professionals.

Space operators who decide not to transfer, but have not served out their entire time commitment to the Air Force, will need to pick a different career field and retrain for that USAF specialty. They can also ask for a waiver to cut their service commitment short, Space Force operations and communications director Brig. Gen. DeAnna Burt said on a recent livestream.

Some are hesitant to transfer because of lingering unknowns as the service stands up, such as what the Reserve component could look like.

More than 2,000 Airmen have opted to transfer so far. The Air Force encourages those who join the Space Force to hold oath and enlistment ceremonies to mark the occasion.