Skip to content
Col. Will Marshall, 48th Fighter Wing commander, conducts a pre-flight systems check prior to a training sortie on March 27, 2020, at RAF Lakenheath, England. Despite the current COVID-19 crisis, the 48th Fighter Wing has a critical mission of delivering combat air power when called upon that must continue. Air Force photo by Airman 1st Class Madeline Herzog.
Expand Photo 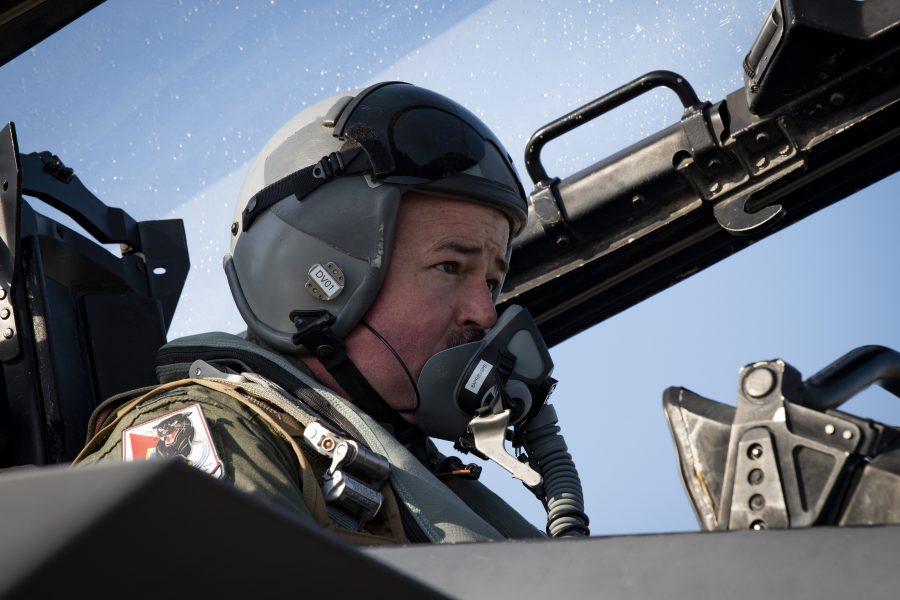 How Lakenheath is Fighting COVID-19 and Keeping its Eagles Flying

When the Air Force needs combat aircraft to rapidly deploy, the F-15s and Airmen of the Liberty Wing at RAF Lakenheath, England, are often the first to respond. So when the new coronavirus outbreak hit the base, it required a quick and evolving response to keep the Eagles and Strike Eagles flying and ready.

“The COVID-19 response has been a significant event for everybody involved,” Col. William Marshall, commander of the 48th Fighter Wing at Lakenheath, said in an interview. “Here at the Liberty Wing, our key task has been to balance the protection of our force, along with ensuring that we can continue to provide the combat airpower.”

The wing, based about 60 miles north of London, first faced the impacts of COVID-19 in mid-March, shortly after completing a combat deployment to Prince Sultan Air Base, Saudi Arabia. The airmen were on rest and relaxation after six months of continuous operations, but with the Defense Department’s stop movement order, the wing had to recall the Airmen and work travel waivers to get them home.

The base’s 48th Medical Group is comprised of some 800 personnel responsible for the care of about 27,000. Its COVID-19 response initially was reliant on emergency care, but as the impact of the virus grew, the group adjusted, 48th MDG Commander Col. Thomas Stamp said.

“At first we were heavily dependent on the ER staff and team … and it wasn’t a system that was sustainable over time,” said Maj. Clint Borchart, the family health medical director with the 48th MDG. “And so as a result of that realization, we started to build up an infrastructure around that team, which allowed for other people that are typically involved in patient care, like the primary care personnel and other departments within the hospital, that were finding that they had some free time … and we built a system around it.”

The group stopped allowing patients that were possibly afflicted with COVID-19 from coming in the hospital’s main entrance. The Airmen at the group also established a hotline for personnel to call in with COVID-19 questions and, if necessary, make an appointment to be evaluated and tested. In the early stages, there was a “surge” of calls and corresponding tests.

The MDG now has drive-through testing, based out of the hospital’s ambulance bay. Lakenheath began its testing process by sending its samples to local National Health Service testing laboratories. However, because of the extent of the outbreak in England, these labs were quickly over capacity and Lakenheath’s test results lagged. Now, the medical group’s samples are flown to Dayton, Ohio, via FedEx to be evaluated at an Air Force laboratory. Despite the long flight, the timeline for results has been cut approximately in half when compared to the local NHS systems, Stamp said.

Those who require evaluation now come to a tent outside the hospital where the primary care provider can wear full personal protective equipment, Borchart said. Doctors see four to six patients a day in the tent, with the goal of keeping the main hospital clean. At the end of the day, the tent is “terminally cleaned,” meaning every inch is wiped down with a bleach solution so it can run again the next day, Borchardt said.

Personnel who are placed into isolation following a positive test get calls from healthcare professionals to check on their recovery. If there’s no follow up emergency care, the patient follows the Centers for Disease Control and Prevention guidelines that state they can end isolation once they are seven days out from when the systems first started, 72 hours fever free without using fever-reducing medication, and their symptoms have improved.

For now, the pace of cases has “ramped down a little bit,” though Pentagon restrictions block individual bases from divulging the specific number of cases, Stamp said. With preventative measures in effect across the base, the installation’s trends are “moving the right way” with a decrease in calls to the hotline, decreasing tests, and fewer people in isolation, though the base is cautiously optimistic because the outbreak is spreading quickly in broader England, he said.

All of these medical efforts are focused on keeping the base and Airmen mission ready. There’s been a “dip” in the number of flights from the base as a result of some of the restrictions, but pilots can fly regularly and maintainers are turning wrenches on the planes at a regular rate.

For example, Lakenheath’s 492nd Fighter Squadron is broken up in to two teams, alternating at a one-week-on and one-week-off schedule. This has decreased the number of sorties by about 50 percent, with most younger pilots flying between two to three times per week and instructors and other senior pilots flying once or twice per week, said Capt. Alexandra Deerr, flight commander and an instructor pilot with the 492nd FS.

The squadron also conducts all briefings and debriefings virtually, and all planning is done remotely, enabling pilots to arrive just 45 minutes before stepping off for a flight. The push for a remote debrief and social distancing has even meant that the famous fighter pilot jalapeno popcorn in the squadron’s “heritage room” is no longer available after flights.

“We’ve really limited hanging out within the squadron,” she said, with pilots and Airmen policing themselves if they stand too closely.

Flying operations are largely limited to the base’s immediate area, with partners both in England and across Europe flying drastically less as the individual countries face the outbreak. Additionally, exercises with other USAF units have been canceled.

This means the Lakenheath squadrons are focusing internally and practicing tactics that, for example, the base’s 494th Fighter Squadron couldn’t fly during the Saudi Arabia deployment. Tankers from nearby RAF Mildenhall have been able to fly regularly with the Eagles for training.

Maintainers cannot do their jobs remotely, so Airmen are forced to be mindful of distancing and regularly wear personal protective equipment. Events such as roll calls are held in open spaces, so Airmen can spread out. Overall though, the pace has remained about the same, said Staff Sgt. Justen Frazier, a crew chief with the 48th Aircraft Maintenance Squadron.

“They don’t talk too much; I think we’re working to keep our minds off of it. And it just keeps us focused on the mission,” Frazier said. “And so, we make humor of small things, but we all know it’s very serious and we gotta take it very seriously.”

Lakenheath’s Airmen have risen to the challenges created by the outbreak, even as they are separated from families back home and the United Kingdom is on lock down.

“There’s been a tremendous amount of change in a very short amount of time,” Marshall said. “And while we continue to work through it, the Liberty Wing Airmen and the families have responded.”

The reduction in the pace of testing and medical evaluations is a result of the broader wing being receptive to the medical recommendations coming from the 48th MDG, Stamp said.

“It is a challenging position to be in, to have a medical group advising a fighter wing to reduce or shut down operations, for not only a period of time but to do so severely,” he said. “The wing leadership has been fantastic in providing support … That’s absolutely key.”