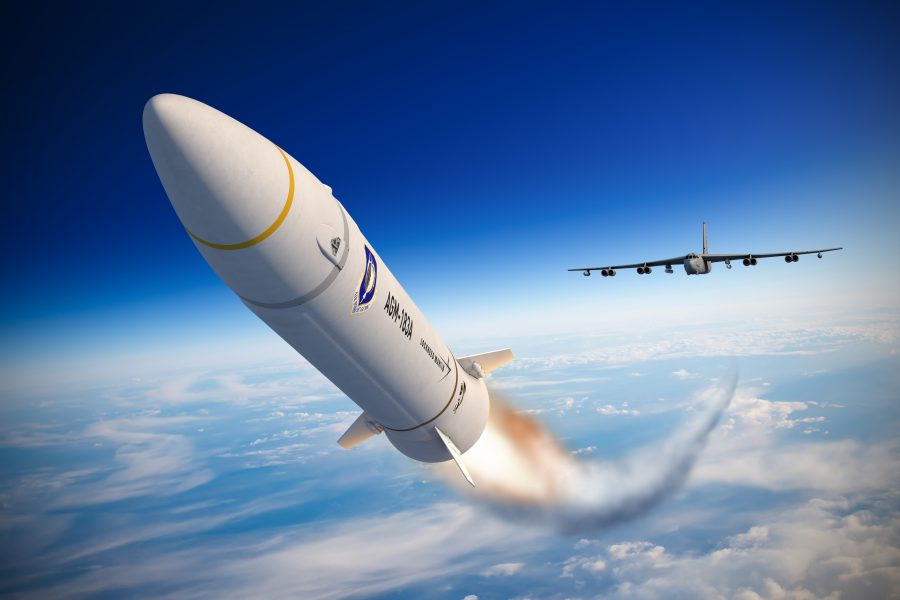 A test flight of the AGM-183A hypersonic missile will be made in the next 30 days, the Air Force’s Armament Directorate said March 5, but the flight will only be a test of the missile’s rocket booster, not an all-up round.

The Air-launched Rapid Response Weapon (ARRW) was trucked to Edwards Air Force Base, Calif., March 1 and work began straightaway on ground tests and checks prior to a boosted flight sometime in the next month, the directorate said in a press release.

The Booster Test Flight 1 (BTF-1) test vehicle “is complete,” the Air Force said. The test flight will “demonstrate the booster’s ability to reach operational speeds and collect other important data.” The flight will “validate safe separation and controllability of the missile away from the carrier B-52H, through ignition and boost phase, all the way up to separation of a simulated glide vehicle,” the service explained. The dummy glide vehicle “will not sustain flight, and will disintegrate soon after separation.” The test will be carried out over the Point Mugu Sea Range in California. Hypersonic speed is generally considered to be Mach 5 and above.

“Our first BTF will happen in the next 30 days, followed by several additional booster and all-up round test flight by the end of the year,” said Brig. Gen. Heath A. Collins, program executive officer for weapons. Collins had predicted Feb. 26 the flight would take place as early as March 1.

The Air Force said BTF-1 “will be the eighth flight test for the ARRW program, following seven captive-carry carriage flight tests.” Collins said Feb. 26 that the Air Force and industry team had experienced a “recent” test failure but had analyzed and solved the problem within a month.

The BTF-1 test vehicle was assembled on “production-representative manufacturing lines,” USAF said. The Air Force and prime contractor Lockheed Martin “took deliberate steps to achieve a high level of manufacturing readiness,” and assembly of the test ARRW “is a major step toward this production readiness goal.”

The ARRW is a boost-glide type of hypersonic missile. The booster accelerates the payload to hypersonic speed, at which point the clamshell front end opens and releases the hypersonic glide vehicle, which flies the rest of the way to the target with no further propulsion, maneuvering along the way.

The Air Force said the ARRW team dealt with delays from the pandemic and “successfully … resolved technical findings not uncommon in a first-of-a-kind weapon system.” The team said it had “minimized schedule delays while maintaining a laser focus on engineering rigor.”

Mike White, the Pentagon’s top hypersonics director, said at AFA‘s virtual Aerospace Warfare Symposium that engineering rigor is essential in testing hypersonics to avoid minor mistakes that can slow a major program or bring it to a halt. “Contractors have heard me give the engineering rigor speech more than once,” White told Air Force Magazine in a February interview.

The ARRW is a “rapid prototyping project that will leverage cutting-edge technologies to deliver a conventional hypersonic weapons capability to the warfighter in the early 2020s,” the service said. It’s meant to give combatant commanders an ability to destroy “high-value, time-sensitive targets.” The ARRW is meant to be survivable when going against “heavily defended targets.”