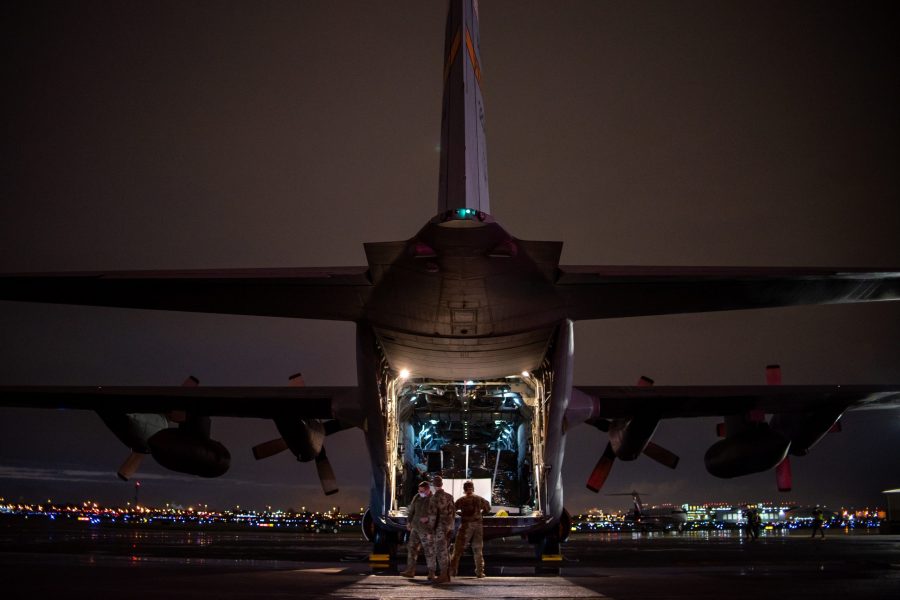 On April 8, two C-130Hs and 14 Airmen ferried 250 isolation pods, a total of 13,500 pounds of cargo, from the manufacturer in Eugene, Ore., to Chicago Midway International Airport, to be used at the McCormick Place alternative care center in Chicago.

“[This mission] flows into the Air Force core values and why we put on the uniform every day, and why we do what we do,” said Maj. Brian Rezac, the aircraft commander for one of the C-130s and the chief of safety for the 182nd Airlift Wing. “It is to help others.”

The wing received the tasking for the mission on April 4, with approval coming from the leadership of the Air National Guard, to prepare to fly in the needed equipment. The wing had to get waivers and exceptions to established Defense Department policy, including the stop movement order. It also had to find ways to operate under new requirements to wear face coverings and maintain social distance when possible. The squadron had recently returned from a deployment, and not many pilots and aircrew members were current and available for the flight, Rezac said.

Two C-130s and Airmen from the 169th Airlift Squadron flew the five-and-a-half-hour flight from Peoria to Oregon, with crew members wearing homemade face coverings or surgical masks in the tight confines of the plane. After landing in Eugene, they stayed in a hotel and avoided contact with others before going back to the airport to load the equipment for the return flight.

Pods were packed into tri-wall boxes, similar to the way cargo is loaded for airdrop missions in Afghanistan. The aircraft flew about five hours from Eugene to Midway, unloaded the cargo, and then made the 20-minute flight home.

“It was incredibly satisfying. … It’s the perfect example of how we serve the state of Illinois by bringing the equipment to the Chicagoland area,” Rezac said.

The coronavirus outbreak, with the related lockdowns and restrictions on operations, has changed how the wing operates. For now, the wing wants to maintain the currency of a cadre of instructors by flying a minimum of three to four times per month so they will be ready to help the traditional Guardsmen regain their currency when operations return to normal, Rezac said.

The wing is working remotely, with much of the full-time personnel not returning to base at all since the shelter in place direction was issued, which is requiring some innovation and flexibility. For example, the wing recently held a virtual drill weekend with everyone in the operations group on a conference call, and Rezac did his quarterly safety brief remotely.

“We’re really discovering a new level of innovation as this thing goes on, and coming up with new ways to get crews together to complete ancillary training,” he said.

For C-130 crews, this type of thinking isn’t new. For Hercules operations, crews are given cargo and a place to move it, and “you figure it out.”

“It’s kind of how we’ve always been doing it,” he said.