Skip to content
The wreckage of an F-16 is seen after crashing into a warehouse near March Air Reserve Base, Calif., in May 2019. An Air Force investigation found that improperly installed parts in the aircraft's hydraulic system caused the crash. Air Force photo.
Expand Photo 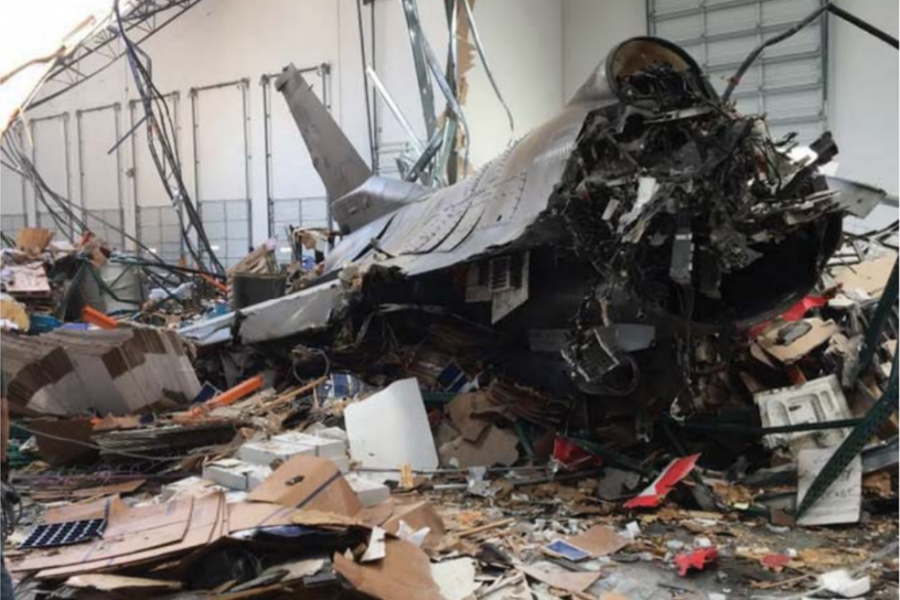 The improper installation of two parts caused an F-16‘s hydraulic system to fail, making the pilot lose control and crash into a warehouse in May 2019 while flying back to March Air Reserve Base, Calif., Air Force investigators found.

The F-16 pilot successfully ejected before the Viper crashed into the civilian building. The aircraft was destroyed at a loss of $24.99 million, and caused about $3.9 million in damage to the warehouse, according to an Air Combat Command Accident Investigation Board report.

The F-16C, tail number 88-0477 from the South Dakota Air National Guard’s 114th Fighter Wing, was operated by a pilot from the California Air National Guard’s 144th Fighter Wing Detachment 1 at March for homeland defense missions. On May 16, 2019, the F-16C took off as part of a two-ship formation for an aerospace control alert training mission in a nearby military operating area.

About 20 miles from base, the pilot deployed speed brakes and lowered the landing gear to burn more fuel and let the wingman visually inspect the aircraft. With the speed brakes and gear deployed and locked, the pilot did not yet declare an emergency, but continued the approach to March, the report states.

The aircraft then indicated further loss of pressure in both of its “A and B” systems, and the pilot consulted checklists for dual hydraulic failure. Once they got close to the base, the wingman landed first on one of the base’s runways, allowing the damaged F-16 to land on a runway with an arresting cable.

With both hydraulic systems failing, the pilot declared an emergency and turned on emergency power as a precaution before starting a straight-in approach to the runway. About one mile before touching down, at about 300 feet above ground level, the F-16 began to roll to the left without any pilot input. The pilot tried to maintain control, and counter the roll, but the aircraft rolled hard to the right in a way that was inconsistent with the pilot’s input.

After losing control of the aircraft, the pilot ejected. Immediately after punching out, the F-16 crashed into the warehouse, located across a major highway from the base. A photograph of the impact shows the F-16’s nose sheared off and wings largely removed in a pile of boxes and equipment. The pilot parachuted onto the runway overrun at the base, and was briefly hospitalized with minor injuries.

The Accident Investigation Board found that the cause of the mishap was two improperly installed hydraulic check valves in the aircraft’s right flaperon integrated survoactuator—a part that translates electrical commands to the movement of flight control surfaces. For both of the parts that failed, investigators found the same problem: the retainer on a screw cap had deformed, with fragments tearing away allowing fluid to leak.

“This condition allowed hydraulic fluid to leak from both systems resulting in decreased hydraulic pressure to move flight control surfaces,” the report said. “The [pilot] set up to land as soon as possible, but the system had lost enough pressure on final approach to prevent the [aircraft] from sustaining controlled flight.”

Maintainers with the 144th Fighter Wing Detachment 1 installed the parts as part of unscheduled maintenance in March 2019 after a possible hydraulic leak was discovered. The parts went through operational checks with no discrepancies found, and the aircraft had flown 10 sorties for 16.3 hours before the crash. The AIB states that there was an inadequate overhaul process, which lacked an effective procedure to identify problems with the installation of the check valves.