Skip to content
USAF F-22 Raptors form up during an elephant walk at Joint Base Elmendorf-Richardson, Alaska, on May 5, 2020. Air Force photo by Tech. Sgt. Westin Warburton.
Expand Photo 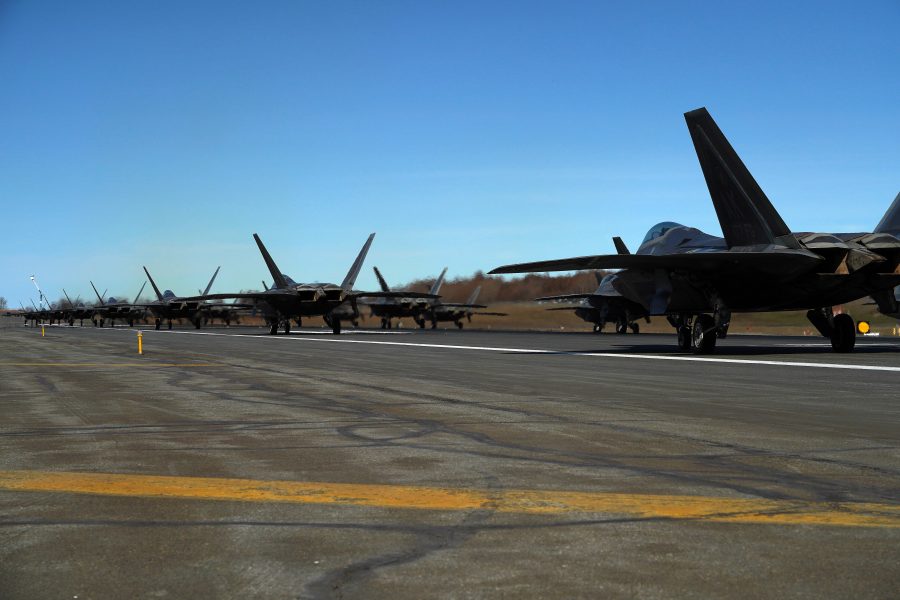 When rows and rows of aircraft, 35 in total, lined up for the largest display of airpower in recent years at Joint Base Elmendorf-Richardson, Alaska, they had two audiences in mind: the Airmen on the ground that made it happen, and most importantly, those who would see the photographs from abroad.

The May 5 “Moose Walk” included 26 F-22s, two C-12s, two C-130s, two E-3 Sentrys, and three C-17s, in addition to HH-60s and a C-17 already in the air. It was a massive display of readiness by the 3rd and 176th Wings at the Alaska base. Airmen worked in shifts leading up to the event, combining a full day’s worth of takeoffs and landings into one onslaught of aircraft.

“The message is that we’re ready. We’ve always been ready,” 3rd Wing Commander Col. Robert Davis told Air Force Magazine in an interview. “And the challenges associated with COVID-19 have not prevented us from being ready to defend the nation in our NORAD alert mission, or to be able to project airpower, to deliver airpower to combatant commanders.”

The base’s F-22s are the most visible frontline defenders to Russian aircraft that routinely test North American Aerospace Defense Command’s defenses of the U.S. and Canada. With the new coronavirus spreading across the globe and impacting the Defense Department’s movement and operations, Pacific Air Forces tasked JBER with showing off.

“We’re aware that there’s some speculation among our international potential adversaries or competitors … that our readiness has declined,” Davis said. “And so there’s a desire, particularly in the INDOPACOM [area of responsibility] for there to be a counter narrative of truth, which is ‘no, we have not declined in terms of our readiness.’

“We wanted to do our part to help send that message. And although an elephant walk doesn’t necessarily prove that our skills haven’t declined, it’s at least a visible message that we can generate a lot of airpower in a relatively short period of time. And then get it airborne.”

As the new coronavirus hit, JBER, like all other Air Force bases, was impacted in how it operates. Airmen began to work remotely more often, social distancing when possible became a requirement, and face coverings are now part of the uniform.

In the early days, the base cut its flying operations back to between 30 and 40 percent of its normal pace as they “hunkered down,” Davis said. Airmen in operations and maintenance split up into teams, coming in to work a few days in a row and then switching out so that if one person is sick, the number of others possibly exposed would be limited.

As time progressed and the base didn’t see a spike in COVID-19 cases, these teams figured out how to operate in their new reality. This new routine, coupled with the base cutting back on non-essential tasks like Airman Leadership School, physical fitness tests, etc., meant the wing could play catch-up on some work. Within the F-22 squadrons, for example, maintainers were able to address delayed maintenance discrepancies. The wing’s Raptors already had the highest maintenance metrics of all the Air Force’s F-22 units, based largely on lessons learned with how to treat the aircraft’s low-observable coatings and investments in supply chains to bring in more spare parts.

By early May, Elmendorf’s Raptors were healthy enough that 26 of the fifth-gen fighters that took off in the “Moose Walk” didn’t need extra maintenance before the event. The limiting factor was personnel, Davis said. If they were able to surge manning like in an exercise environment, the event could have had double the amount of F-22s involved.

The maintainers at Elmendorf, once they received the commander’s intent to do the elephant walk, had to work through an aircraft generation plan to get them out and ready, said Senior Master Sgt. Frederick Cook, the lead production superintendent for the 90th Aircraft Maintenance Unit. The planes themselves were ready to go, but the “biggest obstacle” was COVID-19 mitigation, such as keeping distance in getting the jets started up and ready, and handing them off to pilots with no contact.

“We didn’t change too much of how we operated, we just had to expand on how we operated with what we have and still meet our social distancing guidelines,” he said.

While an event like an elephant walk is largely known for the dramatic photographs of aircraft lined up for takeoff, JBER commanders focused on several ways to address training needs and had their squadrons select younger Airmen to participate to gain experience.

This training, for example, starts on the ground with coordinating fuel and logistics, 176th Wing Commander Col. Anthony Stratton said. Air traffic controllers have to set taxi and takeoff plans, getting aircraft up in rapid succession while also coordinating with nearby Anchorage International Airport, which has been the world’s busiest airport because of increased cargo traffic and the global decrease of passenger traffic.

“We need our Airmen to be able to operate in a complex, coordinated, and integrated environment,” Stratton said. “When we do displaced operations … it’s critical that those Airmen are able to integrate with other organizations that are both providing them with operational capability and logistics and support capability.”

All of this is occurring amid the coronavirus restrictions, which effectively turned the base’s environment into one with a biological threat. This would usually extend the time that Airmen need to do their jobs, but the quick action needed to get an elephant walk airborne provided some pressure.

“The coordination and synchronization that’s required to be able to put all those airplanes in the air … those skills don’t necessarily get exercised on a daily basis, when everything’s kind of spread out over a long period of time,” Davis said. “But in combat, if the sortie production rate is required to be high and you’re having to put up a lot of airplanes all at the same time, which is what we would expect, then that level of synchronization and coordination would be required.”

After the aircraft took off in rapid succession, they split off into smaller groups for other training events. Lt. Col. David Deptula Jr., commander of the 525th Fighter Squadron, took off in the lead F-22 and led a group of Raptors to the Joint Pacific Alaska Range Complex for training that included F-16 aggressors and KC-135 tanker support from nearby Eielson Air Force Base. The Raptors flew basic fighter maneuvers, air combat maneuvers, and defensive counter air training—“we showed a lot of combat airpower here, and we’re able to generate at a moment’s notice,” Deptula said.

Other F-22s met up with the newly arrived F-35s from Eielson for integration and photographs near Mount Denali, Davis said.

The C-17s were loaded with paratroopers from the 4th Brigade Combat Team (Airborne), 25th Infantry Division from the Elmendorf side of the base. They flew tactical low-level missions, and airdropped paratroopers, Stratton said.

The HH-60s involved in the training are spinning up for a combat deployment in the very near future. Rescue units need to conduct combat search and rescue coordinator training, in which they integrate with a variety of other assets. This is typically limited to large-force exercises, such as Red Flag events, but with this many different aircraft participating, they were able to set up a scenario and work with other aircraft to meet this qualification, Stratton said.

The idea behind flying the different aircraft together with younger Airmen was to get them comfortable working together in a way that is representative of possible combat situations.

The event, amid coronavirus restrictions, was a “leadership challenge,” Deptula said. Airmen are social people, and the ability to interact and train is part of the culture. Amid COVID-19, Elmendorf adjusted its methods to demonstrate “we’re still able to operate, to be ready when the COCOM needs us,” he said.

“It’s important to show when the 3rd Wing, PACAF, the Air Force says it can deliver combat capability, we put our money where our mouths are, and we’re able to deliver that capability,” Deptula said.