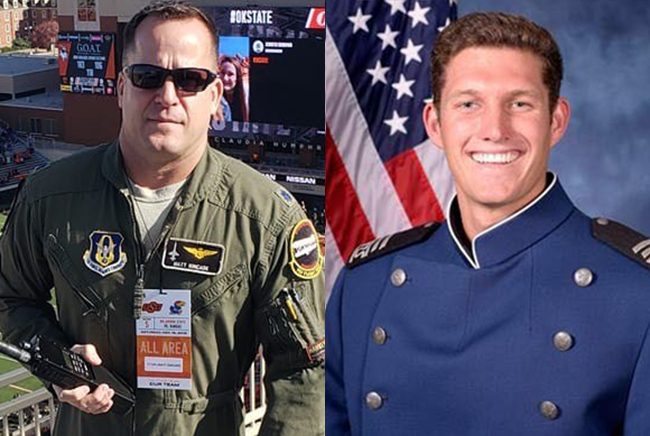 Air Force investigators say a T-38C instructor pilot failed to take control during a dangerous situation as the student pilot made an incorrect input during a formation landing in November 2019 at Vance Air Force Base, Okla., causing the Talon to flip and skid to a stop, killing both. However, the family of the student pilot says the report is “grossly and unjustly incomplete.”

The Nov. 21, 2019, crash at the training base killed instructor Col. John “Matt” Kincade, 47, a highly regarded pilot with the reputation as one of the best T-38 instructors at Vance, and 2nd Lt. Travis Wilkie, 23, a student with a “stellar reputation as a hard worker,” according to an Air Education and Training Command Accident Investigation Board report released May 1.

Immediately after touching down, the T-38 on the left side bounced back into the air and rolled rapidly to the right, before touching down again in a right bank. The aircraft began to skid and crossed the centerline of the runway toward the second Talon. The aircraft lifted off the runway again, possibly in an attempt to take off again and fly over the second aircraft, but struck the other T-38 with its landing gear.

The force of the collision caused the aircraft to roll over the top of the other, and then crash into the ground inverted, killing both the pilots immediately. The T-38 slid about 700 feet before coming to a stop in a grassy area.

The investigation found that during the landing, Kincade did not immediately take control of the aircraft from the student pilot as a “precarious situation” developed. Subsequently, Wilkie made incorrect flight control inputs, prematurely initiating an aerodynamic braking maneuver immediately after touching down. This caused the aircraft to lose contact with the runway, while Wilkie also applied and held right rudder to try to avoid the edge of the runway. The combination of these controls caused the aircraft to roll and yaw to the right, putting it “on a collision course” with the other plane.

The two pilots in the other T-38 were not injured in the incident. Vance temporarily suspended flying operations following the incident. The base flies T-38s, T-1s, and T-6s for pilot training, totaling about 225 missions per day, Vance Commander Col. Corey Simmons said at the time.

Wilkie’s family said the side-by-side landing is a “dangerous and wholly unnecessary maneuver” the family contends should not be included in the T-38 syllabus because it has “no continuing practical benefit to combat pilot proficiency or survivability.”

“Although it is the instructor’s mandate to keep a student pilot safe, it should not be his or her job to ensure preservation of life during an exceedingly unsafe maneuver in an exceedingly tired old plane in which minor student errors occurring in hundredths of a second cannot be corrected quickly enough by the instructor,” the family’s statement said. “We don’t think the Air Force is doing right by our Airmen and Airwomen by mandating student pilots land in formation in a plane so old that it doesn’t perform as responsively as needed to prevent loss of life.”