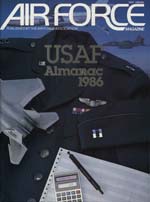 By Russell A. Rourke
At a time of deficit reductions, several areas need concentrated attention.

The Going Gets Tougher

By Charles A. Gabriel USAF
Good budgets have built a stronger defense. It will be difficult to pre¬serve that with the fiscal aus

The Heart of the Force

By Sam E. Parish USAF
In the age of technology, the NCO must be far more than a technician. And the NCO of the future will s

By John T. Correll
The Packard Commission on defense management (see p. 198) is hardly alone in charting new directions for military procurement. Packard’s final report isn’t in yet, but Congress has already erupted with a gusher of new legislation about the way the...

By John L. Frisbee
Manny Klette's war against Nazism would end only when the Third Reich collapsed.