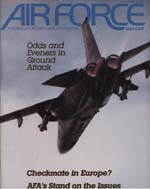 The 1986-87 Statement of Policy, adopted by delegates to AFA's National Convention on September 15, 19

In Focus: Stealth in the Nick of Time

Improving the Odds in Ground Attack

By Jeffrey P. Rhodes
Air superiority is the prestige mission. Sooner or later, though, the war usually gets down to putting

By John L. Frisbee
By extraordinary heroism in combat and as a POW, Col. James H. Kasler earned a distinction shared with no other airman.