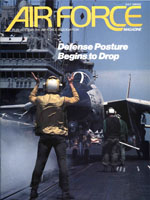 By John L. Frisbee
It definitely was not a day like any other for Howard Dallman and his crew.

By John T. Correll
The world’s most popular man is in trouble at home. Soviet leader Mikhail Gorbachev enjoys one success after another in foreign affairs. In the eyes of the international community, it seems, he can do no wrong. Recent opinion polls give...

A Little Lower on a Little Less

By John T. Correll
Could an Air Force in such splendid condition today have serious concerns about the future? Unfortunat

Back Into Harm’s Way

By Robert S. Dudney
It took a decade to regain the edge at sea. The question now is how to hold on to it.

By James W. Canan
At its lowest strength since 1950, the Army warns that it may not be able to perform its missions for

The Quiet Crisis in Civilian Personnel

They've always been the third of the force with the lowest profile. That may change, though, as it bec

By F. Clifton Berry Jr.
In a fourteen-nation test of science achievement, US high school seniors finished dead last. And that'

By Sam McGowan
Four-engine fighters, phantom friendlies, duels with flak guns, and other tales from the forgotten wor