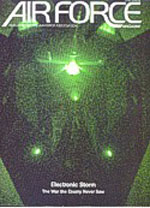 By James W. Canan
Not long ago, they called EW "a disaster area," but, as Operation Desert Storm demonstrated, things ch

Joint STARS Does Its Stuff

By Peter Grier
Six years before its official deployment date, the E-8A made a spectacular combat debut in the Gulf Wa

More Voices From the War

By Stewart M. Powell
Here's another helping of vignettes from the Gulf War, recounted by the troops who fought it.

A Conversation With Chuck Horner

By Richard Mackenzie
The Desert Storm "air boss" describes how the campaign was planned and fought.

The Sartorial Splendor of the Air Force That Was

By Bruce D. Callander
Recalling the short pants, the fifty mission crush, the cowboy boots, the US brass flap, and more.

The Measure of Affordability

By John T. Correll
The nation may not want to spend more than 3.6 percent of GNP on defense, but claiming it cannot do so

Valor: Eareckson of the Aleutians

By John L. Frisbee
Col. William O. Eareckson earned every major combat decoration except the Medal of Honor, but his superiors found him too hot to handle.