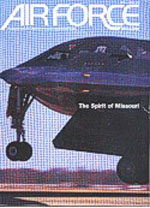 By John L. Frisbee
The odds were heavily against Mustang ace Bob Goebel, but the game wasn't over yet.

By John T. Correll
If the two-conflict strategy is overblown, how do you account for simultaneous war warnings to Serbia

War Stories at Air and Space

By John T. Correll
At the Smithsonian, history grapples with cultural angst.

The Decision That Launched the Enola Gay

By John T. Correll
In April 1945, the new President learned the most closely held secret of the war.

The Spirit of Missouri

By Frank Oliveri
It's the name of the first B-2 at Whiteman, but it also describes an attitude.

By John A. Tirpak
The heavily laden B-52s took off in a hard rain for the world's longest combat mission. They carried a

The Hollow Force That Was

By Daniel L. Cuda USAF
Trend indicators from 1974 through 1989 track the decline and the recovery.

By Robert S. Dudney
All in the Family “Because of his work during the Carter Administration, Dr. Perry is known as the ‘Father of Stealth.’ If that’s true, it’s my job to make sure he keeps up his child-support payments.” Gen. Merrill A. McPeak,...

Snapshots of the New Budget (Fiscal 1995)