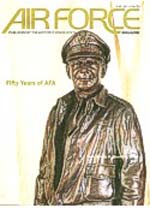 By John L. Frisbee
It was up to a gunner and the navigator to get the riddled B-24 to an emergency landing.

By John T. Correll
Airlift is so effective that the demand always has--and probably always will-- exceed the supply.

Airlift Moves Up and Out

By John A. Tirpak
The decision to build the full C-17 fleet boiled out of a host of studies--and views--about requiremen

During World War II, the War Art Advisory Committee sent combat artists to nearly every theater of the war to record events that changed the world.

By Michael Kennedy, Hugh Levaux, Mark Lorell and Daniel P. Raymer
No US fighter except the F-22 will hold a definite edge on next-generation European fighters.

The Air Force and Missile Defense

By Bill Gertz
The task includes not only destroying these weapons but also finding them before they can launch.

Defense in the Polls

Here’s a sampling of views on defense issues as expressed in public opinion surveys.

The standards for military professionals are higher than those for society at large.

By Suzann Chapman
USAF’s Bosnia Plans Unfold US Air Forces in Europe and Air Mobility Command more than two years ago began planning for possible peace operations in the Balkans. In December, those plans were put into effect. USAF troops at European and...

Three Trends in the Force