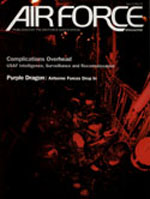 By John L. Frisbee
Capt. Jack Weatherby knew the risk as few did when he volunteered to fly a photoreconnaissance mission against a new kind of target.

By John T. Correll
Doubting we would use nuclear weapons is one thing. Knowing that we did not have any would be somethin

By John A. Tirpak
We're getting better at intelligence, surveillance, and reconnaissance--but the problems are evolving,

By James C. Kitfield
The Air Force and the Army demonstrate two very different cultures where Total Force is concerned.

More than 30,000 service members took part—and with more than 2,800 of them in the skies over North Carolina, things were jumping.

Statistics From the Storm

Ever since it ended, the 1991 Persian Gulf War has been the focus of intense controversy. Here are some illuminating facts about Desert Storm.

In the service’s history, only 21 enlisted members have received the Air Force Cross. Here are their stories.

Pressures Build on the New Budget

By Robert S. Dudney
Despite its readiness concerns, the Air Force says that force modernization funding cannot be put off.

By Bruce D. Callander
Some parts of the operational workload have a more negative impact than others.

The Defense Budget at a Glance (Fiscal 1999)