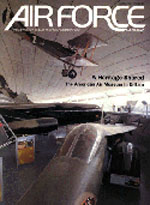 By John L. Frisbee
Blinded by enemy fire, Forrest Vosler guided rescuers to his crew, downed in the North Sea.

By John T. Correll
We have too few forces and too little money chasing too many open-ended deployments.

The new American Air Museum in Britain is a working monument to a common aviation heritage.

By John A. Tirpak
Evolving theater airlift requirements are forcing USAF to re-evaluate its organization and equipment n

By Bruce D. Callander
The "Expeditionary Aerospace Force" will comprise 10 standing groups to deploy on operations short of By Walter J. Boyne
In the spring of 1972, a North Vietnamese invasion was stopped and then turned back by US airpower.

The pilots and ground crews for the Black Jet” maintain both the hardware and the mystique.”

Permanent Crises “We finally got the message; some of these contingencies are not going to go away.”–Gen. Michael E. Ryan, USAF Chief of Staff, at an Aug. 4, 1998, unveiling of a new “Expeditionary Aerospace Force” structure designed to help...