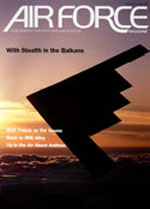 By John T. Correll
The White House staff has dug up an old idea that was shot down for good cause in 1993.

With Stealth in the Balkans

By John A. Tirpak
The performance of the B-2 exceeded the expectations of even its most ardent fan.

Back to MiG Alley

The 51st Fighter Wing still patrols the skies of the Korean peninsula.

Another Look at the Air War That Was

Whit Peters on the Issues

In his confirmation hearing, the new Secretary of the Air Force answered an array of questions from Co

To Be an Airman

By Bruce D. Callander
In this new course, lieutenants take a deeper look at the meaning of their service.

The Battle for Bandwidth

By Theresa Foley
In the fierce competition for the spectrum, the armed forces are up against broadcasters, cell phone u

Up in the Air About Anthrax

By Peter Grier
A growing number of troops, especially in the Guard and Reserve, are refusing to take their anthrax sh

Reconnaissance on the Wing

By Walter J. Boyne
The mission soon became too complicated for bombers and fighters to perform as an additional duty.

By Peter Grier
North Korea Missile Work Worries Neighbors By openly developing a new long-range missile, North Korea is threatening to alter the military balance of power in a region of the world that is crucial to US security. US officials were hopeful...

The War According to Serbia