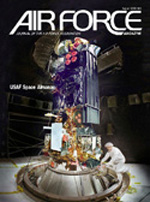 By John T. Correll
It's the effects that count, not where the platforms fly, reside, or orbit.

The Fight for Space

By John A. Tirpak
The Air Force is working on the integration, not the separation, of air and space.

Airlifters from around the world descend on Pope AFB, N.C., for a week of competition and comaraderie.

By Rebecca Grant
If the question is whether aerospace power is effective against ground forces, the answer is "yes."

By Bruce D. Callander
These families have found an alternative to traditional public education.

By Walter J. Boyne
Even then, the defoliation missions over Vietnam were controversial.

By Peter Grier
AEF Development On Track With eight Aerospace Expeditionary Force cycles behind it, USAF is transitioning to the new world of AEFs on schedule and with success, according to Maj. Gen. Carrol H. Chandler, Expeditionary Aerospace Force implementation director at the...

Forgotten War Your article “The Forgotten War” [June, p. 28] brought back memories, [especially when] I turned to [the chronology] under April 12, 1951. I was bombardier in the deputy lead ship that day in a formation of four B-29s....